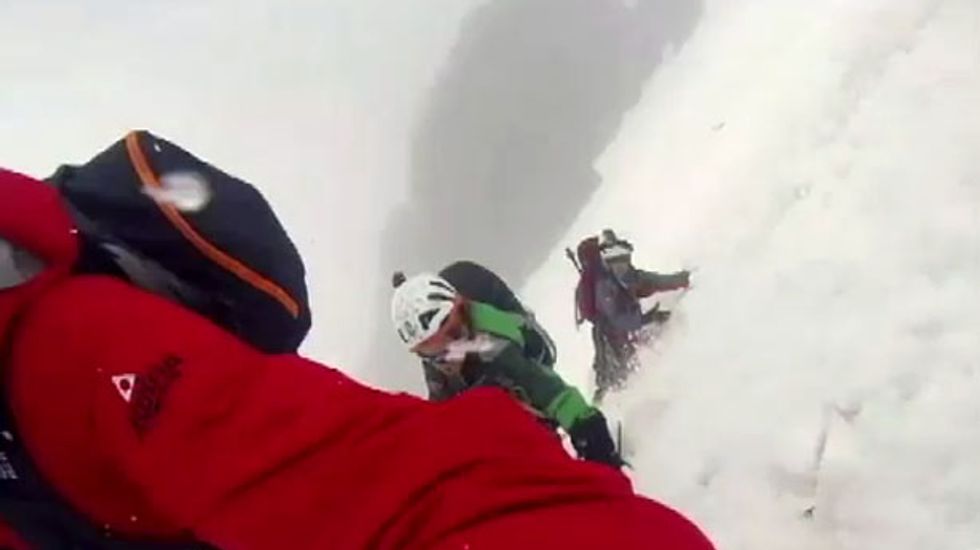 A US climber who filmed his children, aged 9 and 11, being knocked off their feet in a mini-avalanche during an attempt to set a new mountaineering record on Mont Blanc was condemned on Monday by the local mayor and climbers' associations.

The moment was captured on video and the climber, Patrick Sweeney, was interviewed with his children on US breakfast television about how they survived "the corridor of death".

On seeing the footage, however, Jean-Marc Peillex, the mayor of St-Gervais-les-Bains - the town from mountaineers begin their ascent of Mont Blanc - went on the attack.

He denounced Sweeney's "recklessness" and the promotion of the incident in the media, and told FranceInfo radio that Europe's highest peak was "becoming an amusement park where we're going to have gendarmes, rescuers and Pamela Anderson to save us".

Sweeney, a self-described "adrenalin junkie", was attempting to beat the record set by an 11-year-old girl from London in reaching the Mont Blanc summit with his nine-year-old son, PJ, and daughter Shannon, 11.

"He was trying to break the record for stupidity," said the president of the national mountain guides' union, Denis Crabières. He expressed concern about climbers' use of social media to publicise their adventures, and said that Sweeney should have known better than to exploit his children, who would have been unaware of the extreme risk.

In the news clip, PJ describes being "pretty scared" when the avalanche hit, pushing Shannon on top of him. He added, however, that he wanted to make another attempt to scale the 4,810m mountain, while Shannon wanted to wait another year.

Peillex said they would not be welcome in St Gervais. He told the Guardian that since becoming mayor in 2001 he has been campaigning for climbers to pay to be rescued if they abuse the services, which are paid for by the French taxpayer. He hit the roof last month when a Polish climber called for a helicopter "because he was tired". The rescue service refused to pick him up.

"Mont Blanc is not the New York marathon. It's not a trek. It's mountaineering," he said, noting that a Ukrainian climber was killed on Friday on the same corridor where the Sweeneys got into difficulty.

"Next time, he might be filming his children's death on reality TV," he said.

Two Irish mountaineers fell to their deaths on Sunday on the Dent du Géant section of Mont Blanc.