Volume of Das Kapital becomes a $40,000 commodity fetish: What would Karl Marx have said? 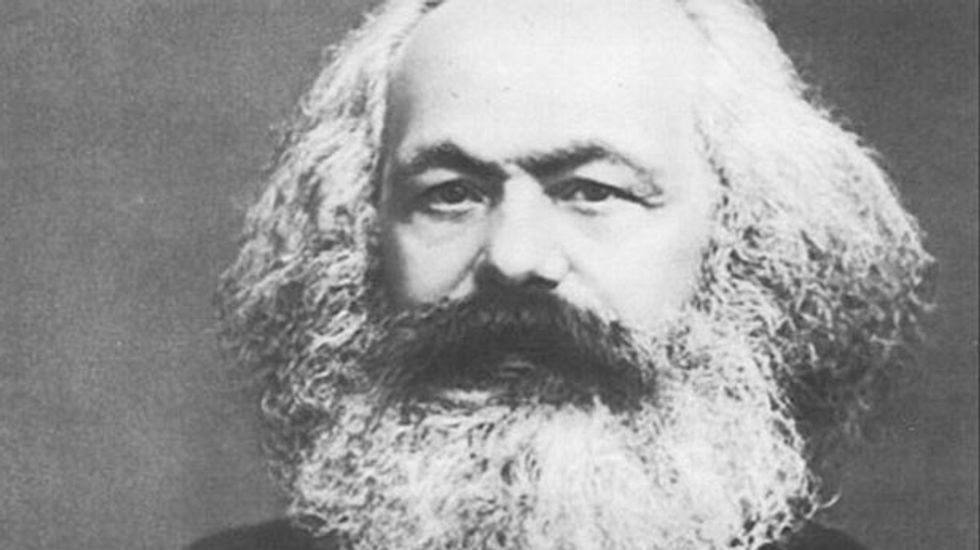 One has to wonder what Karl Marx would make of news from Abebooks that it has scored a coup with the sale of a volume of Das Kapital for $40,000, its second-highest cyber-trade of the year so far.

Abe's blog celebration links the sale to the current, rather spectacular heights of the stock market: "On the day that the Dow Jones index closed at an all-time high of 17,068 points, [we] sold a first edition of Karl Marx's Das Kapital for $40,000." Yet investment in fetish-vessels of cash in the form of fine art, memorabilia, and antiques is very often the resort of rich capitalists anxious about falling markets. If equities are zooming up, rich folks generally leave their money "working for them".

Marx himself was not immune to the seduction of speculation: Francis Wheen's terrific biography of the great communist recounts that, in 1864, he claimed to have made more than £400 from the English stocks "springing up like mushrooms this year".

Marx might perhaps consider that the rare book is a special case of surplus value, not that he saw much return on his own labours – relying instead on handouts from Friedrich Engels' earnings at his family's Victoria Mill in Salford.

At the post-Marxist Frankfurt School and in his journalism and life, Walter Benjamin certainly saw book-collecting as more than a simple market fetish. In his essay Unpacking My Library, he sets out his own attachment to rare books and describes "a very mysterious relationship to ownership … a relationship to objects which does not emphasise their functional utilitarian value – that is, their usefulness – but studies and loves them as the scene, the stage, of their fate … The period, the region, the craftsmanship, the former ownership – for a true collector, the whole background of an item adds up to a magic encyclopedia whose quintessence is the fate of his object."

In his 1936 essay The Work of Art in an Age of Mechanical Production, Benjamin reflects on the emancipatory potential of artefacts made available in repro form, a potential that should be increasing exponentially in our digital economy. But he also mourns the loss of an object's "aura", the added spiritual value that comes when it exists in one place only.

I can remember the days, only a couple of decades back, when Bookmarks, the socialist bookshop, had a branch on Charing Cross Road, among the secondhand and antiquarian trade spotting the district as far away as Bloomsbury and Marx's London office, the British Library. Its austere shelves included Soviet-produced English translations of much of Marx's work, as well as Trotsky's. These were fragile and rare objects themselves, as the Rizla-thin pages would begin to fall apart as soon as you removed one from the shelf. The shop is closed now, but in the later years of this decade this whole area will be overlooked by Amazon's new offices in Holborn, currently under construction.

Given the ironical nostalgia attached to the eastern bloc – its overcoats, badges and statues – the books would probably do quite well on the Soviet kitsch market. But Benjamin certainly wouldn't have bought in.

The simple ironies of the Das Kapital sale only accumulate when one thinks about where the vendor's profits go. Antiquarian booksellers have come to rely on Abebooks to extend their individual niche markets around the world, but many complain that the site's dominance is slowly killing their trade, making books that once seemed hard to come by readily available on its gigantic virtual shelves. We are certainly seeing more and more of the charming 3D shops closing.

And there is a more familiar kind of commodity fetishism attached to the first edition of Kapital Buch I. Since 2008 Abebooks has been owned by Amazon, the company accused this week by Germany's economic minister Sigmar Gabriel of practising "brutal information capitalism" alongside Apple, Facebook and Google. In an editorial for the Frankfurter Allgemeine Zeitung, he said: "It is the future of democracy in the digital age, and nothing less, that is at stake here, and with it the freedom, emancipation, participation and and self-determination of 500 million people in Europe."

We have come a long way from precious, unique artefacts. Amazon's approximately 10% take of the sale, plus an unfathomably high handling charge, make this first edition of Das Kapital into a digital exchange-value counter in the demented e-economy. Pulsing through a distant server somewhere, Marx is giving Jeff Bezos's swelling empire an infinitesimal fillip, a little ouija tap from the spectre of communism.