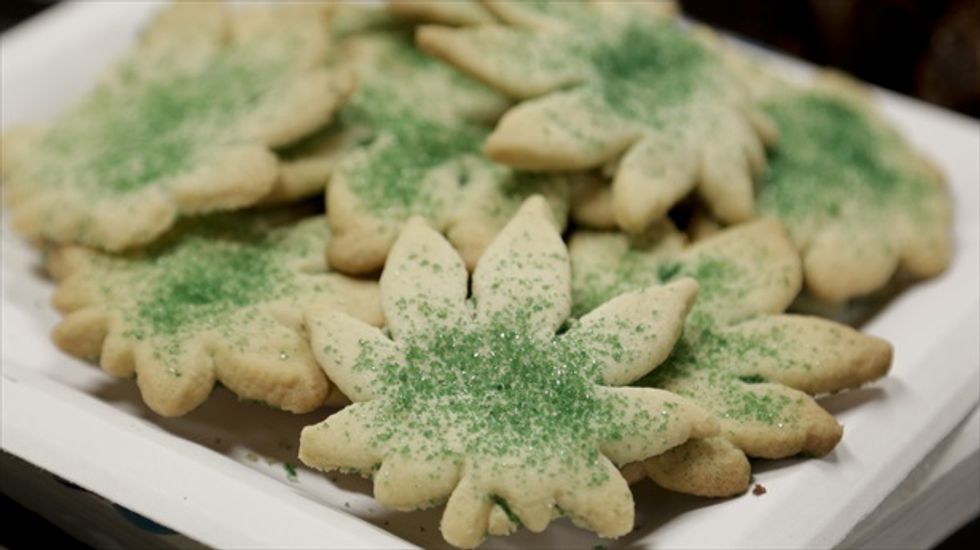 SEATTLE (Reuters) - Marijuana stores in Washington state can sell marijuana in cookies, brownies and other approved baked goods but cannot put the drug in candies, lollipops or food items that might appeal to children, according to newly released rules.

Washington became the second U.S. state to allow recreational sales of marijuana to adults on July 8 when its first retail stores opened under a heavily regulated and taxed system approved by voters in 2012.

The state's Liquor Control Board, which regulates the fledgling sector, published the guidelines on Wednesday for the packaging and labeling of marijuana edibles.

It prohibited any products, labels or packaging designed to be especially appealing to children, including lollipops and suckers, gummy candy and jelly beans.

To gain approval to market a pot-laced food item, such as brownies or bottled drinks, a processor must submit a photo of the product along with its labels and packaging.

The edible also has to pass a processing facility inspection and must be clearly labeled as containing marijuana. Edibles also must be tested for potency and to ensure that the marijuana derivatives are spread evenly throughout the products.

Washington's move to allow recreational sales comes amid a broader trend of liberalization taking hold in many parts of the United States. Recreational sales began in Colorado on Jan. 1. [ID:nL2N0PB02Y]

Things have started slowly in the Pacific Northwest, where Washington state regulators have issued just 25 licenses to retailers and are still processing more than 300 others.

That has led to concerns about shortages. The first and only recreational marijuana shop to open in Seattle ran out of stock only three days after its ribbon-cutting ceremony.[ID:L2N0PM2C4]

Last week a Seattle-based company that makes marijuana-infused drinks and candies became the first business in the state to be approved to make pot edibles, but it was not clear when the first such products will hit shelves. [ID:nL2N0PK2FG]

In Colorado, authorities ordered a recall of products made by a Denver-based company, At Home Baked, which was using a regular clothes washing machine to generate the cold water and centrifugal force needed to make "bubble hash," a marijuana concentrate.

The Public Health Inspections division of the Denver Department of Public Health said it ordered the business to stop using the washing machine because it did not meet minimum sanitation standards.

Among the products recalled on Thursday were pot-infused brownies, candies and rice-crispy treats.

On its Facebook page, At Home Baked told customers to call to arrange replacements at no extra charge. A co-owner who goes by the name A.J. Hashman online said there were no reports of anyone getting sick from their hash.

"They just don't like the machine we used to make it because it is not made to process food," he wrote.

[Image: Cookies shaped like marijuana leafs are pictured at the Cannabis Carnivalus 4/20 event in Seattle, Washington April 20, 2014. By Jason Redmond for Reuters]