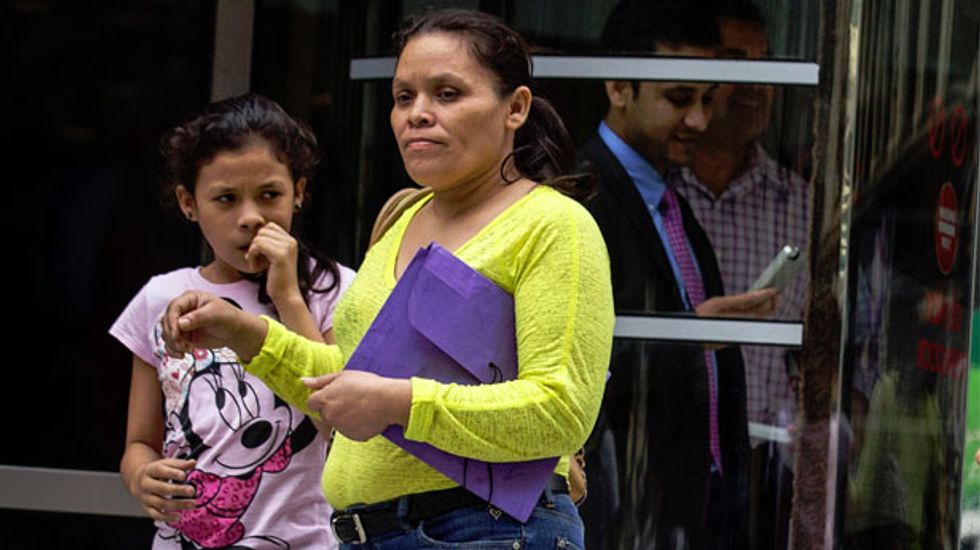 WASHINGTON (Reuters) - A deluge of Central American children pouring into the United States threatens to burst the seams of already overstuffed immigration courts, and President Barack Obama's steps to ease the crisis are likely to make matters worse rather than better for some, U.S. officials and immigration lawyers said.

"We are reaching a point of implosion, if we have not already reached it," said Judge Dana Leigh Marks of San Francisco, who has been deciding immigration cases since 1987 and is president of the National Association of Immigration Judges.

The problem, according to judges, lawyers and immigration groups, is the sheer number of cases clogging the courts, due in part to beefed-up law enforcement at the southwestern U.S. border with Mexico.

U.S. immigration courts have a backlog of 375,373 cases, almost 50,000 more than they faced two years ago, according to Justice Department figures.

Marks, one of the 243 judges presiding over 59 immigration courts in the United States, is setting hearing dates as far off as 2018. It now typically takes three to five years for cases to clear the system, judges and lawyers said.

On a recent Wednesday at a crowded immigration court in Arlington, Virginia, a judge was setting February 2017 asylum hearings for juveniles.

Some of the children who appear in court suffer from debilitating illnesses or are scarred from traumas experienced during the journey north, from rape and other injuries to hunger and forced labor by human smugglers.

"It's like conducting death-penalty cases in a traffic court," said Marks, referring to the high volume of cases and often weighty decisions judges face over whether to return children to crime-infested homelands.

The court overload is rising in part because of a flood of unaccompanied minors from Honduras, Guatemala and El Salvador. Fleeing poverty and violence, many risk the trip alone, often trying to reunite with families in the United States.

Unless the flow of migrants from Central America subsides, the U.S. government estimates about 90,000 children will arrive this year, growing to 150,000 next year.

Obama has asked Congress to fund the hiring of 75 more immigration judges and instructed the immigration courts to prioritize children's cases.

But his two-pronged plan is unlikely to transform a court system that some experts say has been saddled with increasingly complicated immigration laws from Congress since the late 1990s, spates of spiking border apprehensions and insufficient funding.

Budget pressures have contributed to the courts' struggles.

With Central American illegal migration accelerating in fiscal 2012, Congress allocated $302 million for the courts. The following year, funding actually fell to $289 million, although this year it has risen slightly to $312 million.

To fulfill Obama's request of 75 more judges, the Justice Department aims to lure 15 judges out of retirement and find another 60 permanent hires from the ranks of immigration lawyers.

But about 100 judges, more than one-third of the stable, are eligible to retire this year, Juan Osuna, director of the department's Executive Office for Immigration Review that administers the courts, told Congress. Even if only half leave, Osuna said it would hamper Obama's efforts to expand the court.

"As the stress gets worse, it becomes a far more difficult job and people are increasingly likely to retire at their earliest opportunity rather than well into retirement (age)," Marks said.

Immigration judges have been instructed to upend their regular case dockets to concentrate mainly on unaccompanied children and women with children who are in detention.

That could be bad news for the thousands of immigrants whose cases already have languished for years.

Matt Adams, legal director of the Northwest Immigrant Rights Project in Seattle, represents a client whose case illustrates both the cumbersome bureaucracy of the understaffed courts and the unintended consequences of Obama's "children first" directive.

In 2005, Adams' client fled Eritrea and legally entered the United States. The woman's immigration troubles began when she applied for U.S. citizenship, hoping to help bring her husband to the United States after years of separation.

U.S. immigration officials discovered a paperwork problem with her original entry and began deportation proceedings. On her scheduled court date, the judge was out sick and a new date was set for more than a year later.

Adams said if cases of unaccompanied minors were given priority, it would likely further delay his client's case.

Juvenile cases are heard on Monday mornings in Baltimore, Maryland and Wednesday afternoons in Arlington, Virginia. At those times, the immigration courthouses fill with bottle-fed babies, antsy toddlers and nervous teenagers.

Judge Lisa Dornell in Baltimore encourages families to bring blankets or teddy bears to help comfort young children during the proceedings. Around 30 cases can move through Dornell’s courtroom during a Monday morning session.

Another judge told Reuters she uses humor to get kids' attention, like flying a paper airplane to amuse a 10-year-old during a particularly tense hearing.

Arlington's Judge John Bryant observed during one hearing that he sees illegal migrants "as young as 90 days old."

After appearing in Bryant's court, lawyer Cecil Harrigan told Reuters his teenaged client fled El Salvador after his brother was murdered by a gang. "A lot of these young people are running for their lives, and they're scared," he said.

Judge Bryant set a February 2017 asylum hearing for the boy. Until then, the teenager can attend school and have a job.

With no right to a government-appointed lawyer, some children show up for hearings aided only by a friend or relative and a court-appointed interpreter.

In those cases, Bryant gives them a list of non-governmental agencies offering free or low-cost legal services.

"Find a lawyer," he advises.

Even with the contact list, obtaining a lawyer can be difficult and it can take up to a year to get representation, according to Simon Sandoval-Moshenburg of the Legal Aid Justice Center in Falls Church, Virginia.

A new study by Syracuse University's Transactional Records Access Clearinghouse shows that in cases where children had lawyers, about half were not deported.

In cases where juveniles were unrepresented, records show only one out of 10 were allowed to stay in the United States.

On a summer afternoon in the Arlington court, at least one case was removed from the huge backlog. The government, using “prosecutorial discretion” aimed at focusing efforts on higher-priority cases, dismissed its case against a Peruvian teenager who entered illegally in 2010 to join his parents.

"I wish you an absolutely wonderful life," Bryant told the teen.