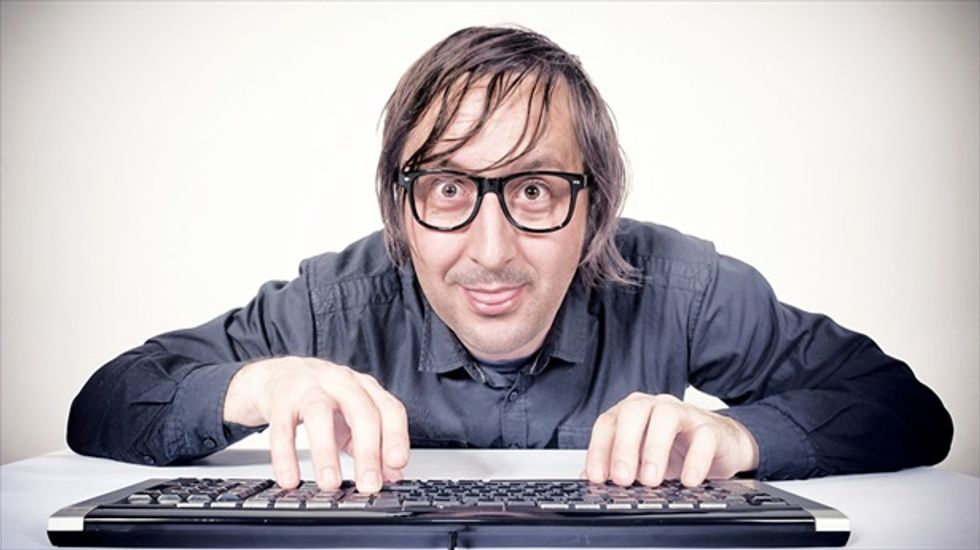 'Hacker Typing On The Keyboard And Mocking' [Shutterstock] http://tinyurl.com/khbjrcw

MILWAUKEE (Reuters) - A police chief in Wisconsin was charged on Thursday with creating accounts on pornographic and dating websites under the name of a local Tea Party advocate to even a score with him, court records showed.

Town of Campbell Police Chief Timothy Kelemen was charged with misdemeanor unlawful use of computerized communication systems in La Crosse County, according to court records. He faces 90 days in jail if convicted.

Kelemen is accused of setting up accounts under the name of Gregory Luce. Luce and fellow Tea Party members allegedly harassed Kelemen's department after the town banned their protest signs on overpasses, a police report filed in a federal court case showed.

"I'm not denying I did it ... I didn't think it was that big of a deal," Kelemen said in a video posted on the La Crosse Tea Party website, showing an interview with investigators in May. Campbell borders on La Crosse.

Neither Monroe County District Attorney Kevin Croninger nor Kelemen's attorney were available for comment. Kelemen was placed on administrative leave on June 12, town board minutes showed.

The rift started in August 2013 when Luce and Tea Party members began holding protests on a pedestrian bridge over Interstate 90, where they hung banners on a fence above a local highway, a court document showed.

During a September town board meeting, Kelemen said the signs created a distraction for motorists, minutes showed. On Oct. 8, board members approved an ordinance banning signs on overpasses.

On Oct. 24, police told Tea Party members wearing T-shirts that spelled out "Impeach Obama" to get off the overpass. Three days later, Tea Party member Nicholas Newman was cited for waving an American Flag on the overpass, said a letter by Newman's and Luce's lawyer, Bernardo Cueto.

In January, Luce and Newman filed a federal lawsuit in U.S. district court in Madison, Wisconsin, against Kelemen and police officer Nathan Casper, accusing them of violating their free speech rights.

(Reporting by Brendan O'Brien in Milwaukee; Editing by Lisa Shumaker)

[Image: "Hacker typing on the keyboard and mocking," via Shutterstock]