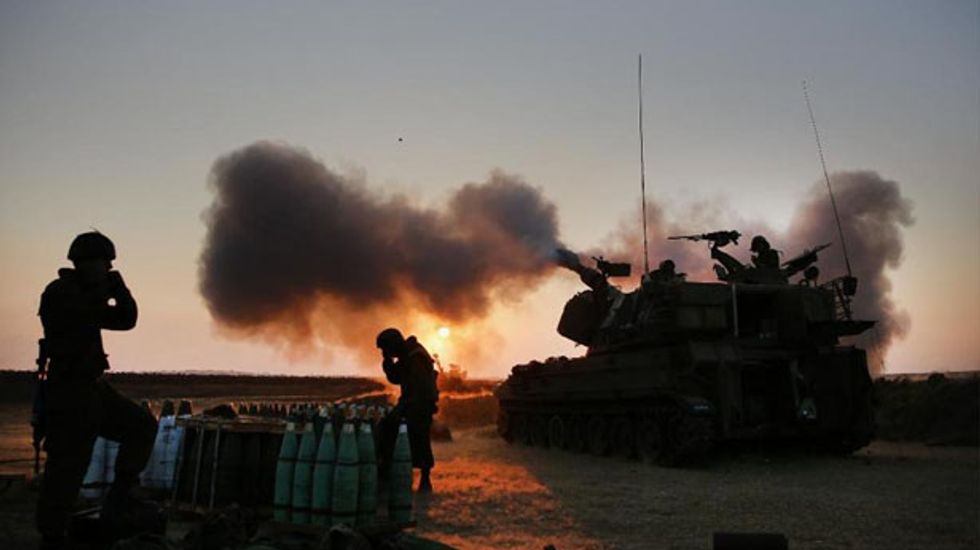 The UN chief and Washington's top diplomat were holding a flurry of meetings in Cairo on Tuesday to push for an end to two weeks of violence in Gaza that has killed 585 Palestinians.

As the conflict entered its third week, neither side showed any sign of willingness to pull back, with Israel pursuing a relentless campaign of shelling and air strikes, and militants hitting back with rocket fire and fierce attacks on troops operating on the ground.

Gaza medics say the Palestinian dead include many women and children, while on the Israeli side, 27 of the 29 victims were soldiers killed since a ground assault began late on July 17.

On Tuesday morning, civil defence crews with a crane parked outside the Salam building in Gaza City, which was hit in an Israeli air strike.

The tower block's top five floors had collapsed onto its bottom four floors. The leg of a person was visible from the street, lying on a piece of rubble caked with streams of dried blood.

World powers have urged Hamas to accept an Egyptian-brokered ceasefire and stop raining rockets into Israel from the Gaza Strip, demands it has so far resisted.

The top US diplomat, who arrived late Monday in the wake of growing casualties from the growing conflict, held talks in Cairo on Monday with UN chief Ban Ki-moon, who has also come to the Egyptian capital to push for a truce.

Ban, who has demanded a complete halt to the bloodshed, was to hold separate talks with Sisi on Tuesday.

On Monday, Kerry demanded that Hamas agree to end the fighting to spare further bloodshed, in a call echoed by the Arab League.

"Only Hamas now needs to make the decision to spare innocent civilians from this violence," he said, pledging $47 million in humanitarian aid for the battered Gaza Strip.

Meanwhile, Hamas leader Khaled Meshaal and Palestinian president Mahmud Abbas held talks in Doha on Monday, pledging to work together for a ceasefire and to lift the blockade on Gaza.

"Hamas and Abbas agreed that all Palestinian factions should work as a team towards a ceasefire," Azzam al-Ahmed, a senior official in Abbas's Fatah party, told AFP.

"It was decided that there should be a ceasefire first, and we will continue discussions with Egypt and all regional and international sides until we crystalise the content of a final peace agreement."

Last week, an Egyptian truce proposal collapsed after it was accepted by Israel but rejected by Hamas.

Meanwhile there was no halt to the bloodshed, with 25 people killed in fresh Israeli strikes on Tuesday, raising the death toll since Israel launched its operation on July 8 to 585, emergency services spokesman Ashraf al-Qudra said.

Five of those killed on Tuesday were members of the same family who died in a strike on Deir al-Balah in central Gaza. Four of the victims were women, he said.

Another 3,640 people have been wounded.

Israel has said Operation Protective Edge is to stamp out rocket fire from Gaza, and on July 17 it sent in ground troops to destroy cross-border tunnels used by Hamas militants to infiltrate southern Israel.

Since the offensive, more than 100,000 Gazans have fled their homes, seeking shelter in 69 schools run by the Palestinian refugee agency UNRWA.

Early Tuesday, the Israeli army said another two of its troops had been killed in clashes in Gaza a day earlier, raising Monday's toll to nine soldiers.

The army also said the remains of one of 13 soldiers killed in Gaza on Sunday had not been identified, indicating that all or part of the body was missing.

The announcement came two days after Hamas's armed wing said they had snatched an Israeli soldier -- a claim that the army has refused to confirm or deny.

Overall, 27 soldiers have died in the past four days, with 13 killed on Sunday alone in what was the bloodiest single day for the Israeli military since the Lebanon war of 2006.

Two Israeli civilians have also been killed by rocket fire.

Hamas's main condition for halting its fire is a lifting of Israel's eight-year blockade on the enclave, but it also wants "the release of those recently detained" in the West Bank, Ismail Haniya, the movement's top Gaza-based official, said late on Monday.

Cross-border rocket fire has continued despite the operation, with 116 rockets hitting Israel on Monday, one striking the greater Tel Aviv area, and another 17 shot down.