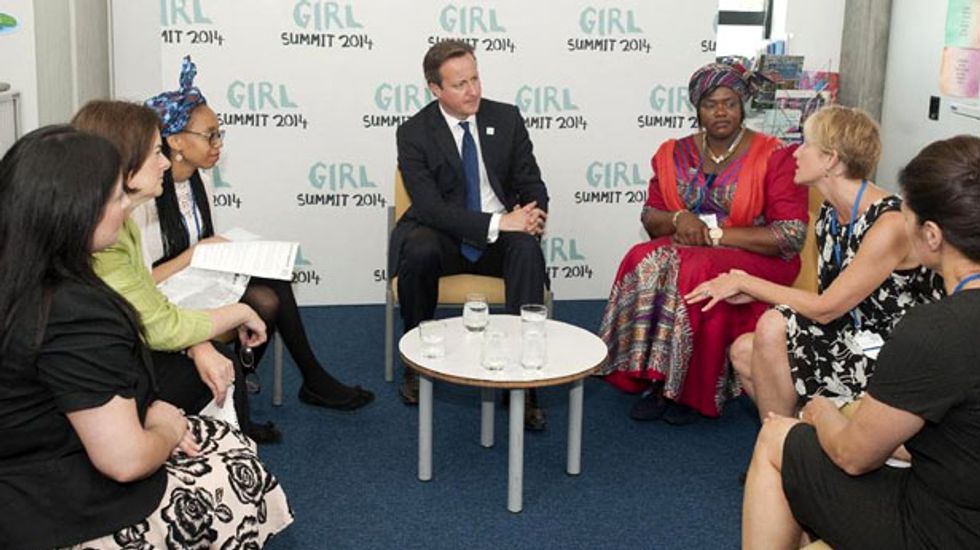 British Prime Minister David Cameron called on Tuesday for a worldwide ban on female genital mutilation and child marriage as he launched the first UN-backed "Girl Summit" on issues that affect millions around the globe.

Cameron announced that parents in Britain would face prosecution for failing to prevent their daughters from being subjected to FGM, while setting out steps to tackle both practices in developing nations.

"Our aim is to outlaw FGM and child marriage everywhere for everyone," Cameron told the summit in London, to applause from an audience of experts and campaigners from around the world.

FGM, which affects tens of millions of women, particularly in the Horn of Africa, ranges from removal of the clitoris to the mutilation and removal of other female genitalia.

It can leave girls at risk of prolonged bleeding, infection, infertility and even death.

Cameron acknowledged that ending FGM and child marriage was no easy task, saying they ranked alongside the global health threats of polio and tuberculosis in terms of the commitment needed to tackle them.

But he argued: "All girls have the right to live free from violence and coercion, without being forced into marriage or the lifelong physical and psychological effects of female genital mutilation.

"Abhorrent practices like these, no matter how deeply rooted in societies, violate the rights of girls and women across the world, including here in the UK.

"I want to build a better future for all our girls and I am hosting the Girl Summit today so that we say with one voice -- let's end these practices once and for all."

The summit, which is co-hosted by the United Nations Children's Fund (UNICEF), will produce an "international charter" calling for the eradication of FGM and child marriage within a generation.

The summit will also launch new programmes to prevent child and forced marriage in 12 developing nations.

Speakers at the event included Malala Yousafzai, the Pakistani schoolgirl who recovered from being shot in the head by the Taliban and is now a campaigner for girls' education.

"We should have the right to change traditions and we should make the changes. We ask that there be no more FGM or child marriage," Malala told the summit.

"We should not be followers of traditions that go against human rights... we are human beings and we make traditions."

UNICEF warned in a new report that while the rate of FGM and child marriage has fallen over the past three decades, population increase in developing nations alone could reverse this trend if "intensive action" is not introduced.

More than 130 million girls and women have experienced some form of FGM in the 29 countries in Africa and the Middle East where the practice is most common, it said.

"The numbers tell us we must accelerate our efforts," said UNICEF executive director Anthony Lake.

"FGM and child marriage profoundly and permanently harm girls, denying them their right to make their own decisions and to reach their full potential."

At home, Cameron confirmed that Britain would introduce legislation under which doctors and teachers would be required by law to report FGM, while parents who allow their daughters to be cut will be prosecuted.

British lawmakers earlier this month said the prevalence of FGM in the country was a "national scandal", warning that up to 170,000 women may have had the procedure and another 65,000 young girls were at risk.

A damning report from the House of Commons home affairs committee condemned the failure of the government, police, health and education authorities over many years to address what it said was an "extreme form of child abuse".

The other cancel culture: How a public university is bowing to a conservative crusade

Pro Publica
In August 2020, Boise State University chose a doctoral student in public policy, Melanie Fillmore, to deliver what is called a “land acknowledgment” speech at a convocation for incoming freshmen. Fillmore, who is part Indigenous, would recognize the tribes that lived in the Boise Valley before they were banished to reservations to make way for white settlers.

Fillmore considered it an honor. She was devoted to Boise State, where she had earned her bachelor’s and master’s degrees, taught undergraduate courses and served on job search committees. She also admired Marlene Tromp, a feminist literary scholar who came from the University of California, Santa Cruz, in 2019 to become Boise State’s first female president. Tromp had been hired with a mandate to promote diversity, and including an Indigenous speaker in the ceremony marking the start of students’ higher education would advance that agenda.

The convocation was to be virtual, because of the pandemic. Fillmore put on beaded Native American jewelry and recorded an eight-minute video on her phone. She began by naming the “rightful owners of this land,” the Boise Valley Indigenous tribes, and then described her own “complicated” background. Her father was Hunkpapa Lakota, her mother white. “I can trace eight generations of my Lakota ancestors being removed from the land of their lifeblood to the reservation, just as I can trace seven generations of Norwegian and English ancestors taking that land,” she said.