You too can talk like an embittered divorced white man with anger issues. Learn how now! 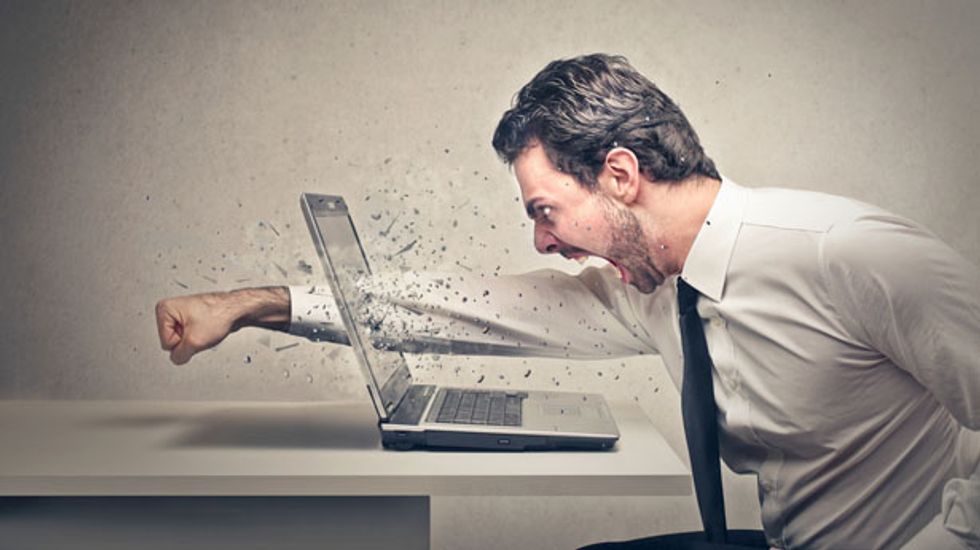 I have developed a certain fondness for the men's rights activists know as MRA's, or more colloquially:  'Restraining-Order-Americans.'

Normally you would have to turn to PETA or Code Pink to find a group whose words and deeds are so completely detrimental to their aims and just make people go, "Ugh, pass." But the MRA's are special .... and yes, I mean they are 'special' in a very 'special' way.  Like libertarians , they sound perfectly rational for the first ten minutes or so and then --suddenly and without warning -- the crazy starts to bubble up to the surface and a new chapter in the DSM-5 is born.

In doing some research on these jolly fellows --BECAUSE I WANT TO BE FAIR -- I discovered a delightful hither-to unbeknownst to me acronym: MGTOW, which I came to learn  means: Men Going Their Own Way.

I assumed this was a different way of a man saying -- when being kicked out of the house by his bitch [definition to come below] wife -- " You can't kick me out, I'm leaving!" normally accompanied by slammed doors and a fist-sized hole in the drywall.

One of the great things about the MGTOW movement is that it can be broken down into bite-sized assertions of life-sustaining principles along the lines of "As God is my witness, I'll never be hungry again!" or "“I swear by my life and my love of it that I will never live for the sake of another man, nor ask another man to live for mine,” or "I'm not going to pay a lot for this muffler!"

With all of this in mind, and because the idea of a man actually being an island (suck it, John Donne, you wanker) has a certain appeal, particularly when "in disgrace with fortune and men’s eyes, I all alone beweep my outcast state," (rock on, Billy Shakes) I invite you to explore the Wonderful World of MGTOW-speak, because man cannot live on calling women 'bitches' alone.

A sampling from the MGTOW glossary for your edification and, remember, THEY DO NOT HATE WOMEN:

NAWALT: The perfectly rehearsed deflection “Not All Women Are Like That!!!” very often heard from women whenever any man criticizes the very real actions and behavior of the female collective. Not to be confused with a valid argument, NAWALT is used to pull focus and conversation away from the actions and behavior of 99% (or “most”) toward the 1% in an attempt to get you to think in terms of the lowest common denominator.

A Real Man: The hive/female definition of any male who is expected to make himself available to be treated as a utility, disposable tool, ATM machine, sperm donor or human wallet. Any man who refuses to be treated this way is generally regarded as “not a real man”, and should be prepared for an avalanche of shaming (i.e. “you must be prepared to drown on a sinking ship and ensure female comfort and convenience – even at the cost of your own life – else you are not a real man“). Most commonly used to describe any man who has not yet shackled himself to a female, or one who is seemingly immune and unaffected by her charms, looks or manipulations. This confuses the female to no end. So much so, that she will now attempt to convince herself that he is not even male. However, the true definition of a “real man” is any human being born with XY chromosomes. The remainder of that definition is entirely up to him – and nobody else. Especially a woman. Because women have zero concept or understanding of masculinity outside the scope of what she thinks he “should” do for her.

Baby Rabies: The female biological clock in full hyperdrive. Firing all cylinders, she has a plan to get pregnant and you are not a part of it. Except to make 216 monthly payments which she plans to extort using any and all methods at her disposal. Including any form of deceit. There are virtually NO limits to what she is capable of – and WILL do – including reaching into the garbage to fertilize herself using the contents of a discarded condom which an otherwise responsibly-behaved man used to protect himself from entering fatherhood against his own will and better judgement.

Bitch: Often mistaken for a derogatory term, the modern female embraces this title and wears it around her neck like Olympic Gold. This can be seen in modern literature written BY women – FOR other women – as in such books entitled ““Why Men Love Bitches” and “Why Men Marry Bitches”. Available in paperback on Amazon, at Borders bookstore(s), and wherever nauseating trash is sold. Therefore, women never get to complain when a man uses the word “bitch” in a sentence. This is precisely why so many millions of women are single against their own will and “can’t find a man”, and it explains the exploding population of single mothers. They deliberately cultivate disaster in their own personal lives, and will even advise other women to do the same. Literally. The only reason a Man would marry a bitch is because she worked her ass off to misrepresent herself for years. No man worth anything would ever do it knowingly. This has already been established here and that bitch also proudly wears the title like a badge of honor. Maintaining QUOTE: “All us bitches are the same. We’re all the same.”. Learn it.

Choir: A group of well-rehearsed feminized supporters who are ready to back up the star artist (your girlfriend or wife) at a moment’s notice and at your expense, of course. The choir is staffed by other females and beta males, and is often conducted by the guy who plans to bang her the moment you’re out of the picture.

Good Girl: No such thing. Some women THINK they are “good girls” because they withhold their affection from a man they pretend to “love” and deliberately intend to enter a life contract while being as unfulfilling as possible, until some sucker pays the biggest price he can possibly pay for access to her love gates. See “whore”.

Okay. Since you asked nicely.

Whore: Contrary to popular opinion and common misconceptions, a “whore” is not a woman who engages in promiscuous sex openly and freely. She does NOT have sex…. until (or unless) she gets something ELSE.

A whore deliberately withholds her affection and attention until some other unrelated price is paid or condition is met first. However, she can only be open for business for as long as she can convince a man that he wants (and needs) sex more than she does. As far as every whore is concerned, sex is something YOU should pay for, but not good enough for her to receive as a fair exchange. When a man figures out women are far more sexual than men – and she can’t pull this off anymore – her price plummets, and she gets furious.

Every woman who has withheld sex until some unrelated price has been paid (or condition is met) is a whore, and for many thousands of years, men have been willing to support whores since the beginning of time while having no problem with this mutual arrangement. However, the modern whore operates under false pretenses while pretending she is not a whore. She will dress, behave, negotiate and even make efforts to look like one, while masking her motivations and rigorously denying she is a prostitute at all. And that’s a whore of a different color.

Don't worry though, ladies, there is still hope for you.  Voice For Men Founder Paul Elam will still let you be his "fuckmuffin."

I love a nice set of tits.

I mean, seriously. I don’t mean they have to be big. In fact, small shapely tits are every bit as nice as big ones.

Oh, and I like a nice round ass, too; curvy with a smallish waist floating over hips that flare at just the right angle. I like well-formed thighs that lead up to the promise land, and smooth knees above shapely calves. Of course, all that combined with a woman’s pretty face is a crowning glory; full lips that promise supple kisses and great blow jobs, clear eyes and unblemished skin. All this combines to make a woman utterly fuckable, and visually that is what I like most of all. I like to look at women that are little fuckmuffins.

And I really like it when those fuckmuffins are sexually liberated and adventurous; when they like to please and be pleased, not living life with prudish sticks up their asses made from the same wood that forms the chips on their shoulders. It makes them a fuck-ton more fun.

Line forms to the left, girls.  No shoving, hair-pulling or cat fights. There is plenty of Paul to go around for everyone.

'Oh my God Jesus': Paul Ryan floored when he learned of Trump White House chaos -- according to Woodward book