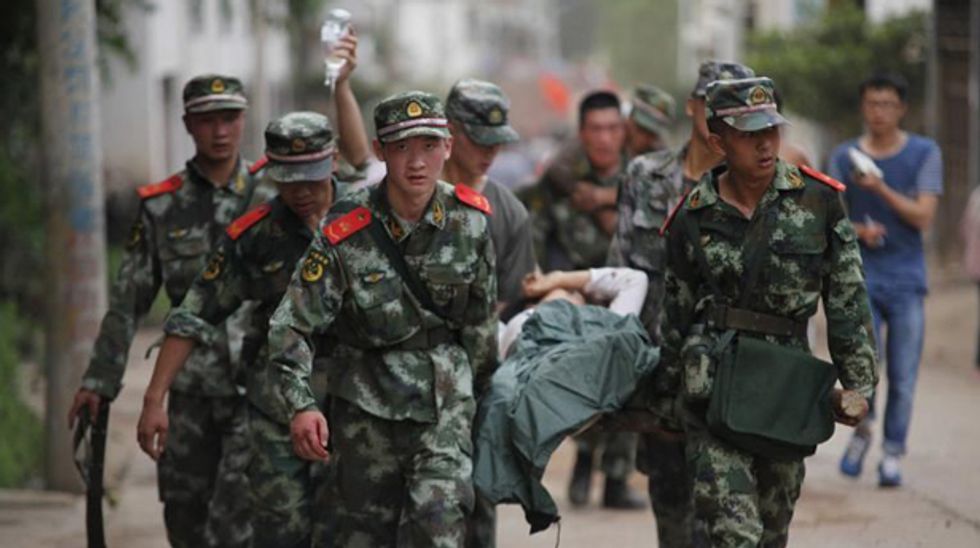 The quake in Zhaotong prefecture, in the province's northeast, toppled buildings and left rescue teams and residents to pull survivors from beneath the rubble, images on social media showed.

"At least 367 people have been killed and 1,881 people were injured," the official news agency Xinhua reported early Monday, citing rescuers and raising a previous toll given minutes earlier of 357.

The US Geological Survey (USGS) reported the quake at a magnitude of 6.1 and said it struck at a relatively shallow depth of 10 kilometres (six miles) at 4:30 pm (0830 GMT).

"Too many buildings were damaged and we are collecting data on deaths and injuries," Xinhua quoted local official Chen Guoyong as saying in the township of Longtoushan, which sits at the epicentre.

State television broadcast footage of people running from their homes and gathering in the streets, as witnesses described the devastation on social networks.

"The walls of several buildings crumbled, and water pipes were ruptured. The electricity was cut off," wrote a user in Ludian county, 23 kilometres from the epicentre, on China's Twitter-like Weibo.

The user's message was accompanied by images of cracked walls and a pile of bricks strewn across the road.

Another Ludian resident described the scene as resembling a "battlefield after bombardment", telling Xinhua: "I have never felt (such) strong tremors before. What I can see are all ruins."

The county was the worst hit, with 122 residents killed, more than 180 missing and 1,300 injured. At least another 53 deaths were recorded in neighbouring districts. Electricity and telecommunications have been cut across the area.

Ludian has a population of nearly 266,000 and sits more than 300 kilometres from the provincial capital of Kunming.

State media announced that 2,500 troops had been dispatched to quake-hit areas late Sunday, joining a team of more than 300 police and firefighters from Zhaotong City, the capital of the prefecture.

The province also sent 392 rescuers and sniffer dogs to aid the relief operation.

Volunteer Ma Hao, a college student who was helping to carry the injured out of the collapsed buildings in Longtoushan, described a race to pull the living from the rubble that left little time for the dead.

"We had no time to take care of the bodies. We need to help those alive first," he told Xinhua.

Heavy rain in the vicinity may pose challenges to rescuers, with more downpours forecast in the coming week.

USGS had warned that people in the region lived in structures "highly vulnerable to earthquake shaking".

Complicating matters, the road leading to Longtoushan was damaged in a landslide before the quake.

Southwest China lies where the Eurasian and Indian plates meet and is prone to earthquakes. In 1974, a 6.8-magnitude quake in the same area killed more than 1,500 people.

In September 2012, 80 people were killed when twin earthquakes struck the mountainous border area of Yunnan and Guizhou.

In May 2008, an 8.0-magnitude quake rocked Sichuan, which neighbours Yunnan, killing tens of thousands of people and flattening swathes of the province