Are non-vaccinating parents rationalizing their desire to avoid crying kids? 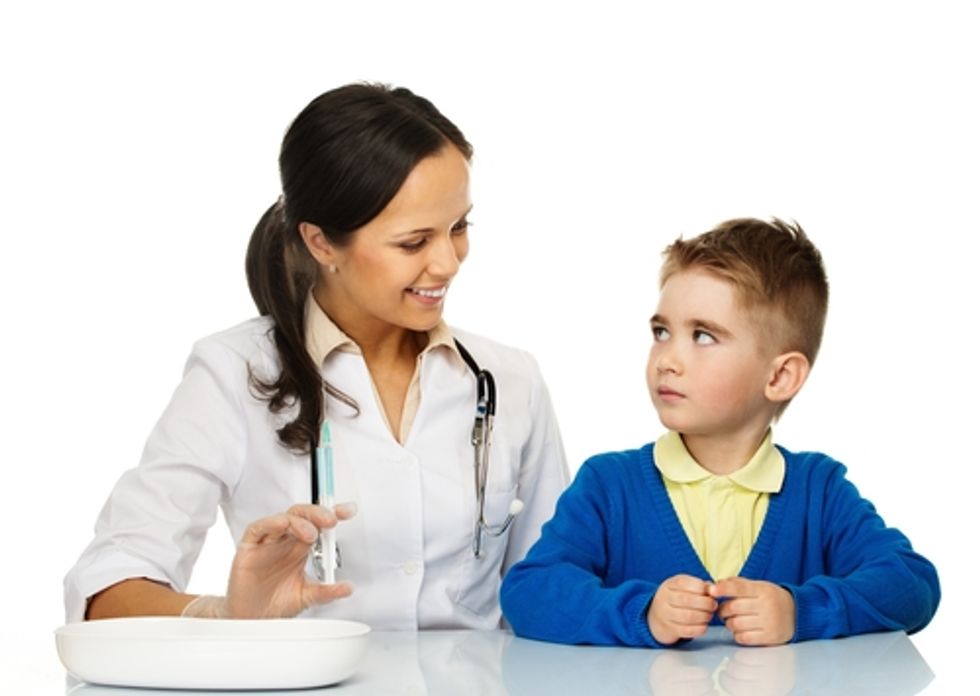 Do it and I will cry, lady.

Mark Strauss has an interesting post up at io9 that argues that a major, if not the major reason that vaccination rates are going down comes down to the free rider problem, in this case parents figuring they can skip the shots because other people will do the work of getting their kids vaccinated, protecting their own children from both the shot and the disease. I've been somewhat wary of this argument in the past because it implies that vaccinations carry a risk that might justify being wary of getting the shot, but Strauss convincingly argues that when you're the kind of person who has no qualms about being a free rider, even the inconvenience of having to put up with a whining, crying child post-shot is worth it for some people.

Some of these parents are lulled into the belief that their kids will be safe because they read about the high vaccination rates in their respective states. For instance, in California, that rate is at 95%. And, in Iowa, just over 93% of toddlers receive shots for mumps, rubella and measles, which is around 2% higher than the national average.

But those numbers don't tell the whole story.

He notes that a lot of pediatricians are reporting that the anti-vaccination sentiment they're encountering is do to parents who "don't want to subject their young children to the pain of getting all of their shots at once." He quotes Greg Laden, talking about the emotional impact:

But I’m pretty sure some anti-vaxers … not the activists but just some of the parents who quietly chose to not have their children stuck … do so because they can’t stand the needle, the pain, and (in some cases) the subsequent though generally very minor suffering or discomfort of a needle-wound or side effects of the vaccination. And I can understand that. When you see the infant you love being so brave in the face of the atrocities of the doctor’s office, turning red, trying not to cry, lip quivering, finally breaking down, and that look … that look of betrayal … Yeah, I can see not wanting to do this too often.

The most outspoken activists have all sorts of psychological garbage going on, but I think that Laden and Strauss are onto something here. I suspect that even most parents who wax on about their inchoate fears of "toxins" in vaccines are rationalizing what they already want to do, which is delay or avoid dealing with the unpleasantness of the vaccine. (I personally remember having to suppress the urge to think, "Maybe the cat doesn't need 6 weeks of antibiotics," before admitting to myself that I just wasn't looking forward to 6 weeks of daily cat torture the cat didn't understand. Don't worry, the cat is fine, because we sucked it up like grown-ups and perfected the art of dosing a cat with meds.) We know that's how people tend to think about these issues. They decide how they feel and then come up with a bunch of rationalizations for why that's the right choice.

Basically, it's very hard to convince people to undergo unpleasant experiences if they are very certain there's no personal benefit to them. Even very simple actions like wearing a seatbelt and not throwing litter on the ground  were surprisingly hard to convince people to do en masse, because they believed---correctly or not---that the chance that their choices would create problems for them were so low that it wasn't even worth the extremely minimal effort of snapping a seatbelt into place or hanging onto your garbage until you had a place to throw it. The least surprising thing in the world would be if a significant number of people, convinced that their kid doesn't need the shot personally to be protected, would say, "Fuck it, so why would I bother going through that hassle? Let other people do it." But, because they know that it sounds really terrible and selfish to say such a thing out loud instead invoke fear of "toxins" to justify doing what they wanted to anyway. We live in a world where people will assume the rules are for other people and not for them all the fucking time, so why should that be any different when it comes to enduring the unpleasantness that is getting your child some shots?

That said, public health campaigns convincing people to buckle up and to not litter have been smashingly successful. It doesn't hurt that they're backed up by laws requiring that you do these things---even introducing the small risk of a ticket changes the calculation a lot---but I think that a lot of the success comes from how the campaigns reframed these issues from "hassle" to "taking responsibility". People love to think of themselves as people who take responsibility! If you can get people to stop thinking of a behavior as something The Man is trying to get you to do and instead think of it as something you do to demonstrate that you're caring, responsible person, then they're much more likely to do it. That's why people are more likely to vote in presidential elections than local elections, even though technically their vote counts for more on the local level. The high profile of the presidential election is much more likely to give you that glow of participating in your duties as an American citizen. Voting in local elections, however, feels like going to the post office.

That's what research from Women Thinking, Inc. found when they studied what kind of messaging on vaccinations works on parents:

“I wouldn’t put my child into a car without a safety belt or a car seat. I won’t put my child at risk by leaving him/ her without immunizations, either. It’s my responsibility to make sure my child is protected from dangerous illnesses.” This argument turns the act of passively failing to vaccinate one’s child into a voluntary action, and it convinces two thirds of our survey respondents. Because it frames a simple lack of action as presenting their children with a real threat akin to a car crash, parents can visualize the harm that can result from their unwillingness to act. This is an uncommon strategy, but it has proven to be an effective one.

Considering the strong possibility that people avoid vaccinating mostly because they think their child is already protected, reframing it as "this is what good parents do" might help a lot. Everyone wants to be the dutiful parent! I'd be curious, too, about studies that push the idea that you should vaccinate to do your part in protecting all children. For instance, researchers found that by changing signs in hospital washrooms from "Wash Your Hands to Protect Yourself” to “Wash Your Hands to Protect Your Patients," they increased the rate of hand-washing. Whether right or wrong, most people struggle to imagine our hands as a threat to our own health, but if you frame it as a selfless action you do in a community-spirited way, then it triggers a different urge. Now it's not about self-protection, but about being a Good Person. Perhaps vaccinations could be subject to the same kind of public health campaign.