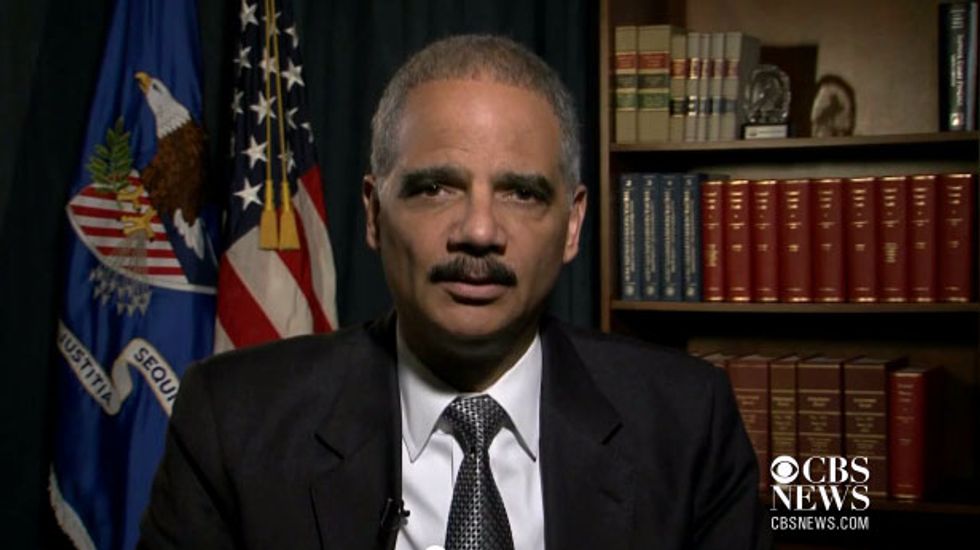 By Scott Malone and Ellen Wulfhorst

FERGUSON Mo. (Reuters) - U.S. Attorney General Eric Holder was visiting Ferguson, Missouri, on Wednesday, hours after nearly 50 protesters were arrested in the 11th straight night of demonstrations over the killing of an unarmed black teenager by a white police officer.

Prosecuting attorney Bob McCulloch said his office could continue presenting evidence to the grand jury through mid-October as he confronts conflicting pressures for speed and thoroughness.

Outside McCulloch's office, a few dozen protesters called for him to be removed from the case and for the immediate arrest of the officer involved in the shooting. The officer, 28-year-old Darren Wilson, has been placed on leave and gone into seclusion.

"The criminal justice system in America ... is as racist as it was 50 years ago," said 62-year-old African-American minister Stanton Holliday, who said he was a longtime civil rights activist and was concerned that prosecutors were taking too long.

Holder said he planned to visit Ferguson, a predominantly black St. Louis suburb of 21,000 residents, to be briefed on the progress of a separate civil rights investigation he has ordered into the Brown killing.

In Ferguson, some said they hoped Holder's visit would lead to a speedy arrest and prosecution of the police officer involved in the shooting, while others cautioned against hasty justice.

Jason Schmidt, a 28-year-old black man who works for a temporary agency, said he hoped the federal government's involvement would lead to "the killer paying for his actions.

"... If this was done to any other race, to any other place, in any other situation, I don't think it would have taken this long to get justice," Schmidt said.

"You don't want to rush it and have him get off if it turns out he is guilty," Garrett said.

In a special message to the community published online by the St. Louis Post-Dispatch, Holder said about 40 FBI agents have been assigned to the case, along with prosecutors in the U.S. Attorney's Office in St. Louis.

Hundreds of people have already been interviewed, Holder said, and federal medical examiners have performed an independent autopsy, the third conducted in the killing.

"Our investigation into this matter will be full, it will be fair, and it will be independent," Holder said.

He joined Governor Jay Nixon and other officials in a renewed appeal for public calm following demonstrations that have gripped Ferguson since Brown was killed.

Most of the protests have been punctuated by looting, vandalism and clashes between demonstrators and police.

EYES OF THE WORLD

The turmoil has generated international headlines and exposed simmering racial tensions in Ferguson, whose police force, political leadership and public education administration are dominated by whites.

"I condemn the excessive force by the police and call for the right of protest to be respected," she said in Geneva.

Police and the governor have insisted that thugs or outside agitators have caused most of the trouble.

On Tuesday, demonstrators were noticeably fewer in number and more subdued than on previous nights. Onlookers milled about as civic activists, members of the clergy and even Missouri Attorney General Chris Koster mingled with protesters.

The relative calm abruptly dissolved just before midnight, however, as police in riot gear ordered lingering demonstrators to disperse, then charged into the crowd to make arrests.

Police later said they took 47 people into custody and seized several loaded firearms, but no gunshots were fired.