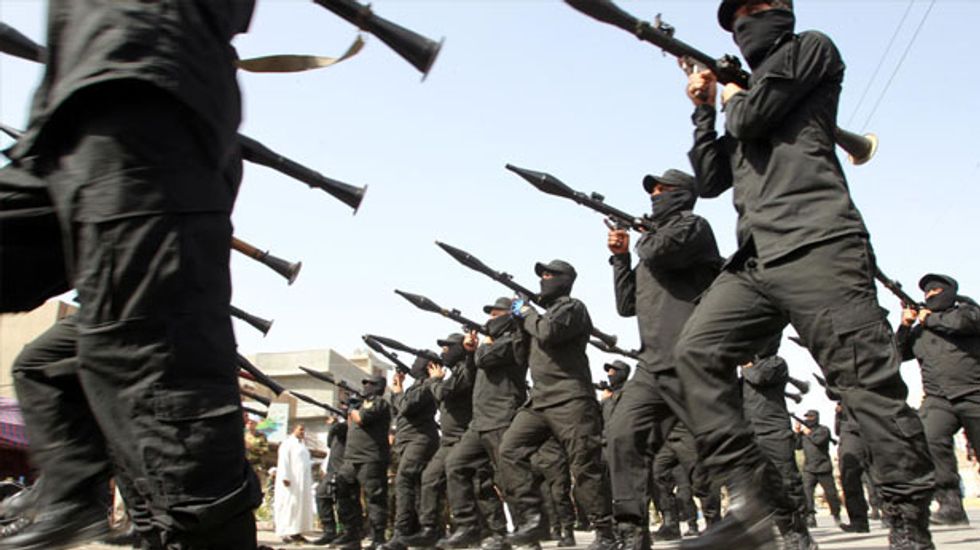 Australia will toughen laws to target home-grown terrorists and those who fight overseas over fears violent jihadist citizens in Syria and Iraq will return home, officials said Tuesday.

Prime Minister Tony Abbott said the terror threat to Australia had not subsided since the September 11, 2001 attacks and remained at the highest level it had ever been.

Officials have said up to 150 Australians are fighting alongside militants overseas, with warrants issued last week for two Sydney men suspected of fighting in Iraq, including one who posed for photos with severed heads.

"What we are now acutely conscious of is the danger posed back here in Australia by people returning to this country who have been radicalised and militarised by the experience of working with terrorist organisations overseas."

Counter-terror legislation under preparation would make it easier to identify, charge and prosecute people who have been engaged in terrorist activities overseas, and prevent extremists departing, Abbott said.

It will also make it an offence to travel without a valid reason to a so-called designated area, as nominated by intelligence agencies.

The laws will also attempt to ensure officials are best able to monitor potential terror activity in Australia while including "the usual range of safeguards and warrants", the prime minister said.

Foreign Minister Julie Bishop said governments around the world were increasingly concerned about how to grapple with the risk to domestic security posed by citizens who have fought in foreign conflicts.

She said mercenary and foreign fighters were in Ukraine while Syria and Iraq were "becoming a breeding ground for extremism".

Bishop said prior to the NATO-led intervention in Afghanistan, Australian intelligence had suggested there were 30 people of interest fighting in that country and becoming extremists.

"Twenty-five of them came back to Australia. Two thirds of those were thereafter involved in terrorist activities," she said.

In making the announcement, Abbott revealed that proposed changes to a law banning racial slights, which ethnic minorities had warned could give licence to bigotry, had been shelved.

The government had planned to repeal a section of the Racial Discrimination Act that makes it illegal to "offend, insult or humiliate another" because of their race, saying it should not be used to stifle free speech.

"I don't want to do anything that puts our national unity at risk at this time, so those proposals are off the table," Abbott said.

The Human Rights Law Centre welcomed this part of the announcement, saying Australia's laws against racial vilification were working well and were strongly supported.

But the Australian Council for Civil Liberties said the government had not made the case for the proposed terror law changes.

"The measures represent an attempt to use the current problems of Australians fighting with terrorist groups as a power grab for extra powers, the need for which is not currently made out," president Terry O'Gorman told Australian Associated Press.

Abbott said Aus$630 million (US$588 million) would be spent over four years to boost counter-terrorism via security and intelligence agencies.

The government also plans legislation to improve the collection and admissibility of evidence abroad and update Australia's telecommunications interception law, which predates the Internet era.