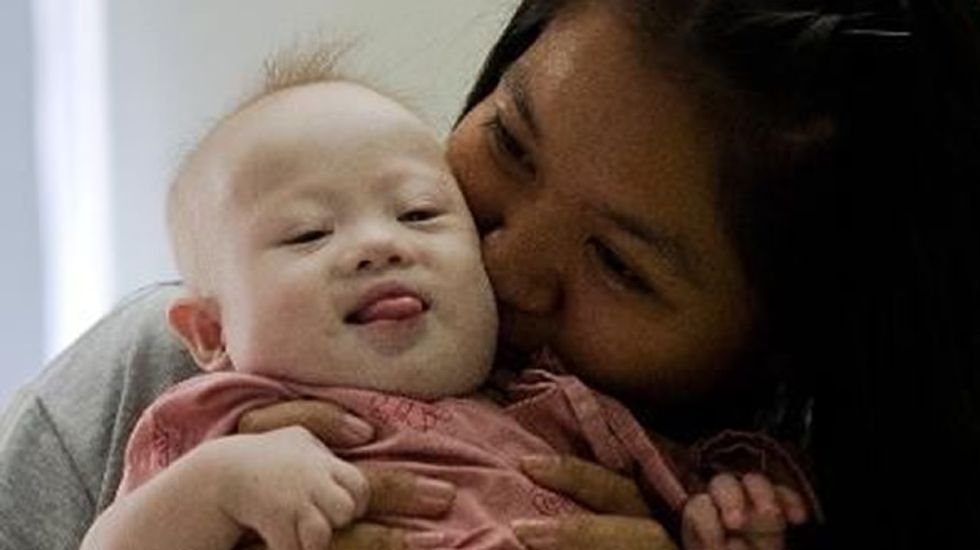 An Australian father accused of abandoning his Down's syndrome baby has convictions for child sex offences, reports said Tuesday, as the surrogate mother said she was willing to take back the boy's twin sister if the allegations were true.

The revelations came as the man and his wife claimed the Thai woman who gave birth to Gammy had misled the world over what happened.

The couple, who cannot be named for legal reasons, have come under heavy criticism for apparently rejecting the boy at birth and taking only his healthy twin sister back to their home in Bunbury, south of Perth, from Thailand.

State broadcaster ABC added that he was jailed for sexually molesting two girls under the age of 10 when he was in his 20s. He was also accused in 1997 of another six charges of indecently dealing with a child.

Other reports said child protection services had been called in to investigate his "suitability", although they were unable to confirm this to AFP and police had no comment.

The surrogate mother, Pattaramon Chanbua, has insisted she will raise seven-month-old Gammy after saying the biological parents at first requested an abortion and then walked away when they learned of his condition.

But the Australian couple said in a statement, issued through a friend to their local newspaper the Bunbury Mail, the allegations were false and they did not know he had Down's syndrome, although they were aware he had a congenital heart problem.

"Gammy was very sick when he was born and the biological parents were told he would not survive and he had a day, at best, to live and to say goodbye," the friend, a woman, told the newspaper, without saying who told them this.

The birth of the twins was supposed to take place at a major international hospital in Thailand but Pattharamon went to another facility, which made the surrogacy agreement void, according to the newspaper.

This meant that the couple had no legal rights to the babies although the surrogate mother finally agreed to hand over the girl, the report said.

"The biological parents were heartbroken that they couldn't take their boy with them and never wanted to give him up, but to stay would risk them losing their daughter also," the friend said.

She added that allegations that the couple "ignored" Gammy when they visited the hospital were untrue and they had bought gifts for both infants.

The friend said the couple spent two months in Thailand but due to military unrest at the time felt they had no option but to leave without Gammy.

"This has been absolutely devastating for them, they are on the edge," she said.

The case has sparked fevered debate on the moral and legal grounding of international surrogacy.

Commercial surrogacy, in which a woman is paid to carry a child, is not permitted in Australia but couples are able to use an altruistic surrogate who receives no payment beyond medical and other reasonable expenses.

To avoid those curbs, Surrogacy Australia said couples are increasingly choosing to find women willing to carry their baby overseas, with several hundred each year travelling to India, Thailand and the United States.

"I don't think there would be anyone in the country who wouldn't be really pretty cut up about what's happening here," he added.

While the full picture of exactly what happened in Thailand remains unclear, Pattaramon insisted to AFP on Tuesday she had been transparent.

"I have never lied or hidden anything. The truth is the truth, it's up to society to make their own judgement," she said.

Pattaramon said she was willing to take Gammy's sister back if the latest allegations were true.

Pattaramon has said she agreed to carry another Thai donor's egg fertilised by the Australian man in exchange for around US$14,900.

An agency, which she refuses to name for legal reasons, acted as the go-between.

She says the agency told her the parents wanted her to have an abortion once medical tests revealed the boy had Down's syndrome, but she refused.

Abortion is illegal in Thailand -- except in very specific cases including rape and to protect the mother's health -- and it also runs counter to beliefs in the overwhelmingly Buddhist kingdom.