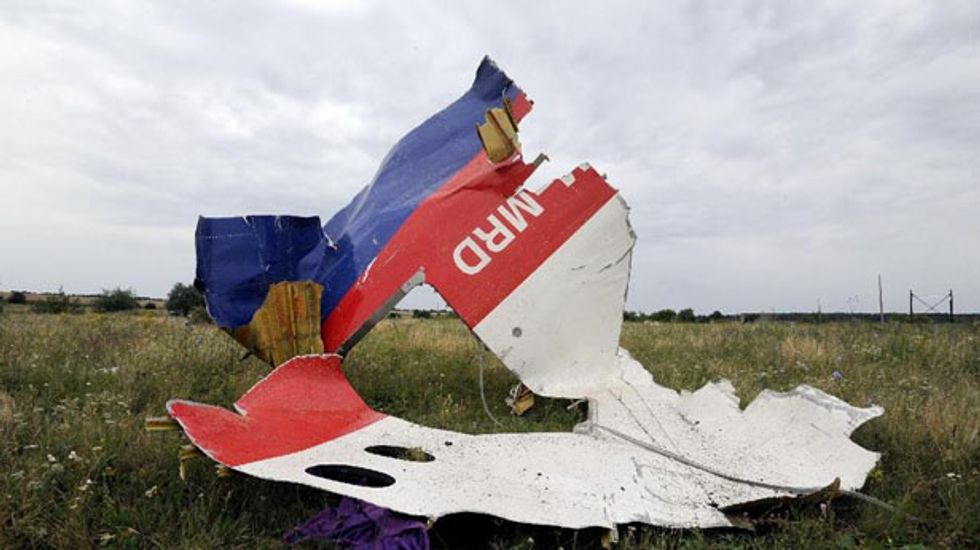 A sniffer dog zigzagged swiftly across a field overgrown with grass as police experts in blue uniforms fanned out to methodically work their way across a debris-strewn field in eastern Ukraine.

In the middle distance the boom of sporadic shelling disturbed the quiet but the investigators focused on the ground as they occasionally crouched down to pack objects into bags.

This was the second day of the stalled international hunt for remains and clues at the crash site of downed Malaysia Airlines flight MH17, with fragments still lying in wheat fields and flower-dotted meadows in rebel-held territory.

Over two weeks after the doomed flight was blown out of the sky some 70 investigators from the Netherlands and Australia -- which between them lost 221 citizens of the total 298 on board the jet -- were scouring a small part of the debris strewn for kilometres around.

Over 220 coffins have already been sent back to the Netherlands but body parts from some victims of the disaster still lie under the searing summer sun.

Now the investigators have come in better equipped and a refrigerated ambulance van stood on site waiting to receive its grim cargo.

Two sniffer dogs have arrived from the Netherlands and two more are expected soon from Belgium.

The Australians meanwhile have at least one propellor-driven drone but are still waiting for permission to deploy it.

"Dogs can smell a big area in a relatively short time so it will help us getting the human remains out as fast as possible," Dennis Muller, a press officer for the Dutch investigators, told AFP.

Journalists were asked to keep some few hundred metres (yards) back from the main search party and press briefings were delivered on the entrance lane to a chicken farm that is at the centre of the site.

All the time Kalashnikov-carrying rebels controlling the site kept a watchful eye on journalists, shouting at them to get under some trees when an unidentified plane flew overhead.

While work continued undisturbed for hours around the main impact site and more remains were found elsewhere, the battle between the pro-Russian insurgents and Ukrainian government troops raged on.

Shelling forced some of the probe team to hurriedly abandon a village where parts of the plane are lying.

"We heard at a distance of approximately two kilometres incoming artillery from where we were and that was too close to continue," says Alexander Hug, deputy chief monitor with the Organisation for Security and Cooperation in Europe's mission in Ukraine.

"It was close enough to decide to leave. The artillery impact was very loud and the ground shaking. It's not an experience you have every day."

As shelling was heard in the distance, some 40 villagers from Grabove on the edge of the site gathered around a wooden cross to hold a service for an Orthodox saint's day.

A wreath decorated with purple roses and dedicated "to the victims of the disaster" by the residents of the nearest town was propped up next to the cross, along with soft toys.

"Are you scared? We're scared too, " said Svetlana, holding a bunch of yellow gladioli, a white scarf on her head as the chanted prayer of the priest mixed with the distant rumble of firing.

As well as seeing the horrific plane crash with bodies and debris raining down, villagers have seen their region torn apart by war and are now living without running water, electricity or telephone.

The road through the crash site remains open with cars and pedestrians walking past a couple of perfunctory lines of red-and-white tape, beyond which parts of the plane and passengers' belonging are still scattered on a meadow. A wing lies on the ground as well as sections of the fuselage.

"Every day people are coming and looking, checking something," said a local, Natalya, riding a bicycle.

There are suitcases and bags as well as seats from the plane and shoes, clothes and magazines, some looking as if they have been sorted while others lie in a jumble.

In a sign of commemoration, someone left a candle in a red-glass holder on one of the metal fragments.