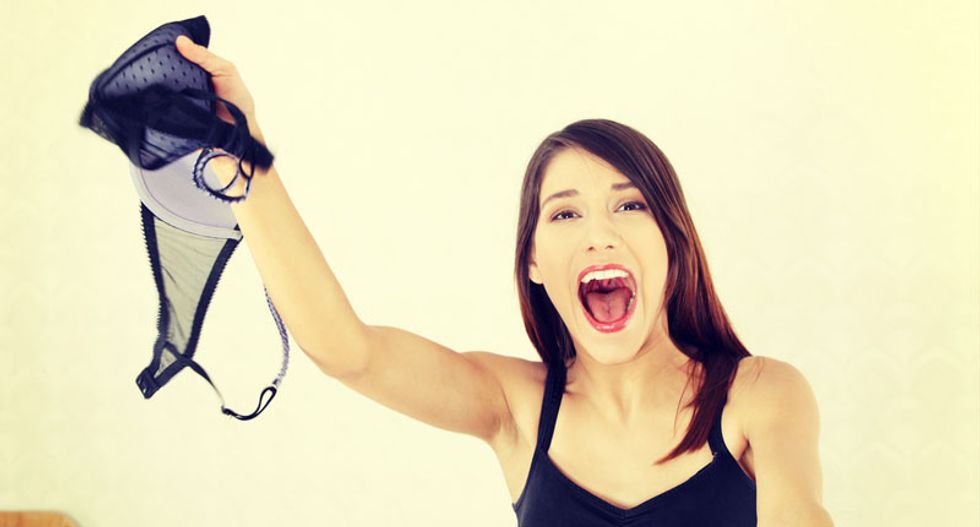 Hundreds of people have hung bras around Valladolid's city hall in a protest to demand the resignation of the Spanish city's mayor after he warned men to be wary of false accusations of sexual assault.

Monday's protest came days after mayor Francisco Javier León de la Riva told a Spanish radio station that rape allegations should be carefully scrutinised. "Sometimes it's the other way around. Imagine you get into an elevator and there is a girl who is out to get you. She enters with you, tear off her bra or skirt and flees, shouting that you have tried to assault her," he said. "Beware of this kind of thing."

The mayor, from the conservative People's party, said women bear some of the responsibility in avoiding assault. Noting that "you can't have a police officer in every park," he said "at six in the morning a young woman should be careful of where she goes."

As public outcry mounted, he apologised. "I am sorry that statements taken out of context have had such repercussions," he told Spanish journalists the day after his comments were broadcast. "To anyone who was offended, I have no problem offering an apology."

But Riva's words did little to defuse the anger of hundreds of residents who turned up at city hall on Monday to demand that he resign. Taking aim at his words, they hung bras around city hall, wrapping them in a chain around the pillars in front of the building.

"We can't just sit back and take these comments," said Marisol Morais, the spokesperson for La Coordinadora de Mujeres, an umbrella group made up of various NGOs, political parties and women's groups in Valladolid. "This is the man who's charged with looking after citizen security in our city."

The mayor's comments come amid heightened concerns about gender violence in Spain, she noted. The number of women who have been killed at the hands of their partners has jumped in 2014 compared to previous years. "So far there have been more than 50 women killed by their partners this year – just on Monday two women were killed," said Morais, compared to 52 in all of 2012 and 54 in all of 2013.

Spain's interior ministry say more than 1,000 sexual assaults take place in Spain each year – or one every eight hours. "Still, after all that data, the mayor throws out these backward, machista [macho] comments."

Morais said the comments were not an anomaly, and rather reflected city officials' attitude towards women. "The city does have policies on gender equality and gender violence, because the law stipulates that they must. But the policies are void of any content."

She pointed to programmes working to combat gender violence and noted that last year they failed to receive any subsidies from the city. "It's not just that the mayor says these things, but rather that he sets a tone that's being reflected in the city's policies and priorities."

Morais' group has vowed to continue pushing for the mayor's resignation and plans to take the issue to the next city council meeting on Tuesday. "We can't put up with this anymore. He doesn't represent us. The era he's living in has disappeared."

The mayor's office declined to be interviewed. But Spanish media noted that it was not the first time the 68-year-old former gynaecologist had found himself in hot water over machista comments in his 19 years as mayor.

In 2007, when speaking about his electoral campaign against a Socialist politician, he told reporters that "they've accused me of everything except raping her." In May he took issue with women playing rugby. "Rugby isn't appropriate for women. It's not sexist but I don't think its good for 20-year-old women and even younger 8-year-old girls to tackle so hard," he told Cadena SER radio. "There are other sports that would be more appropriate, such as rhythmic gymnastics or skating."

[Woman with bra on Shutterstock]