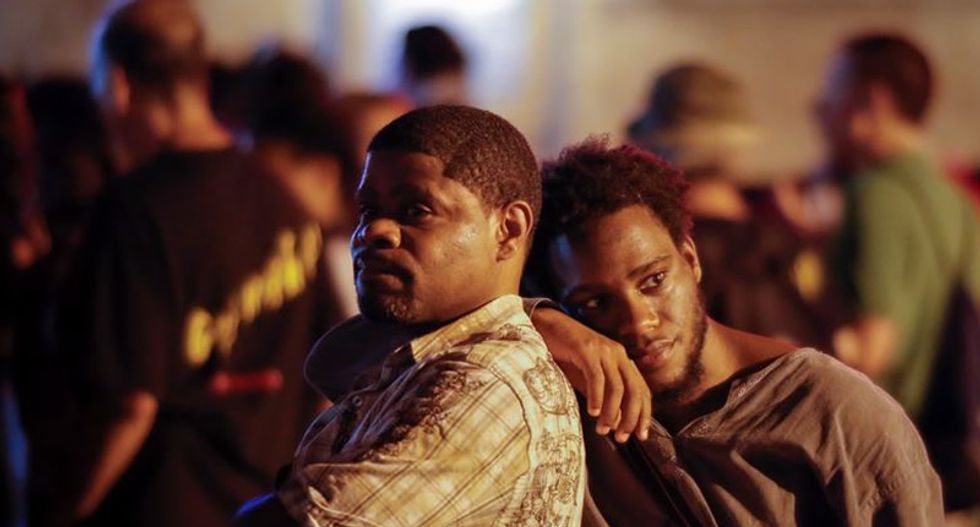 Two weeks after a white policeman shot and killed an unarmed black teenager in Ferguson, Missouri, smaller, quieter street protests prevailed at the weekend, while supporters of the officer rallied separately and called the shooting justified.

Saturday marked the fourth night of relative calm for the St. Louis suburb following nightly spasms of unrest since Michael Brown, 18, was shot by Ferguson police officer Darren Wilson on Aug. 9. The area's main street was open to traffic and police presence was down sharply from just 24 hours earlier.

For well over a week, authorities had arrested dozens nightly in clashes with demonstrators, drawing attention to often-troubled U.S. race relations. Police were criticized for mass arrests and use of heavy-handed tactics and military gear, which was widely seen as stoking an already volatile situation.

President Barack Obama has ordered a review of the distribution of military hardware to state and local police, a senior administration official said on Saturday.

Early on Saturday about 70 people marked the two weeks since Brown's death at a makeshift memorial where he was shot.

Tracey Stewart-Parks, 52, who works for a health care firm, carried a sign that read "Mike Brown was someone's son - I walk for their son." She said something similar could have happened to any of her four sons.

"All of them have had to learn the rules of driving black," she said. "This has been a long time coming ... It's time to rip the Band-Aid off this old wound. It's time for change."

In the afternoon, some 500 people braved triple-digit heat to march in a St. Louis County rally, joined by Missouri Highway Patrol Captain Ron Johnson, commander of the police response to the demonstrations, who is black, and St. Louis County Police Chief Jon Belmar, who is white.

'HIS STORY IS COMING OUT'

About 14 miles (22 km) away in St. Louis, dozens of Wilson's supporters gathered at Barney's Sports Pub to raise money for his family.

"We are here to support you, Officer Wilson, and we've got your back. He has been vilified in the news but his story is coming out," said St. Louis resident Mark Rodebaugh.

A statement from rally organizers said "Our mission is to formally declare that we share the united belief that Officer Wilson's actions on Aug. 9 were warranted and justified."

Despite the calm of recent nights, Derrick Rhodes, 45, who owns the Country Girl Pie House in St. Louis, remained wary, saying "It all depends on the verdict of the officer."

With little information released about the investigation, a grand jury began hearing evidence on Wednesday, a process the county prosecutor said could take until mid-October.

The National Guard began a gradual withdrawal from Ferguson on Friday, but authorities remain braced for a possible flare-up of civil disturbances ahead of Brown's funeral.

(With reporting by Steve Holland in Edgartown, Mass.; Writing by David Bailey and Dan Whitcomb; Editing by Chris Michaud)