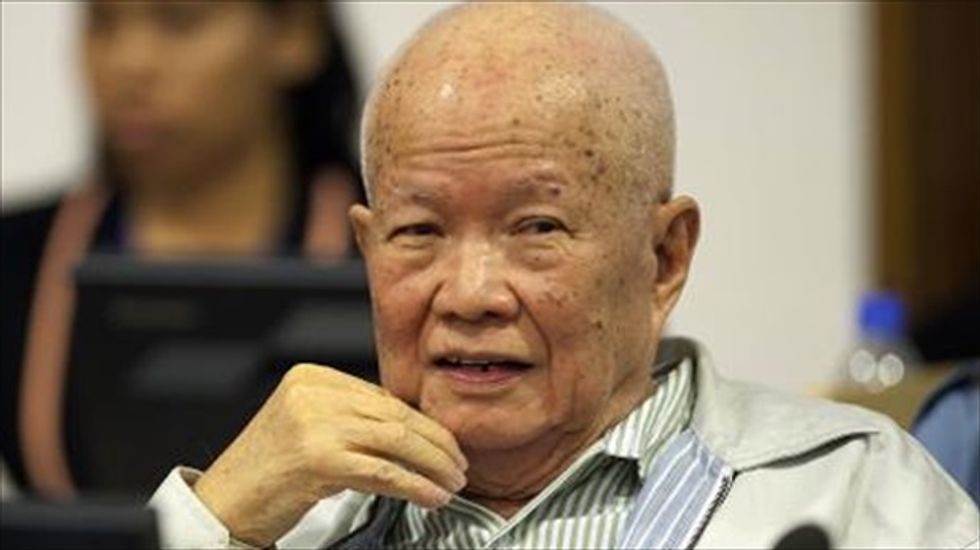 Phnom Penh (AFP) - Two former Khmer Rouge leaders face a verdict at a UN-backed tribunal in Cambodia on Thursday over allegations of crimes against humanity, marking the first time rulers of the murderous regime will be judged in a court.

Prosecutors are demanding life in jail for "Brother Number Two" Nuon Chea, 88, and former head of state Khieu Samphan, 83 (pictured above) -- the most senior surviving ex-Khmer Rouge officials -- for their roles in a regime which left up to two million people dead from 1975-1979.

Around 900 Cambodians are set to attend the court on the outskirts of Phnom Penh to watch the verdict -- and possible sentences -- expected at around 10:30 am (0330 GMT).

The judgment will also be broadcast live on television and radio in a nation still haunted by the communist regime which wiped out of nearly a quarter of Cambodia's population through starvation, overwork and execution in a bid to create an agrarian utopia.

Thursday's verdict follows a two-year trial which focused on the role the ex-leaders played in a period of forced evacuation and related crimes against humanity.

Yim Sovann, 54, was among two million Cambodians expelled from the capital into labour camps in 1975 -- one of the largest forced migrations in modern history.

Like many survivors of the "Killing Fields" era, she lost several family members -- her father, a former secret agent, was executed, while her younger sister disappeared after soldiers accused her of stealing a handful of rice.

Sovann says she will attend court Thursday, but rather than justice -- which she says is up to the judge -- the devout Buddhist seeks answers.

"I don't want revenge. But I beg them to answer who else was involved... to say who ordered what, who is behind the killings," she said.

These questions may never be resolved -- both defendants have insisted they were unaware of the crimes committed under their rule, although in October last year Nuon Chea expressed his "deepest remorse" for those who suffered.

"The verdict will not totally heal the victims' moral wounds, but they will be eased to some degree," court co-prosecutor Chea Leang told AFP.

Many observers and victims fear the ageing Khmer Rouge leaders may not survive to serve any jail time if they are found guilty.

Former foreign minister Ieng Sary died aged 87 last year while still on trial. His wife Ieng Thirith was released in 2012 after being ruled unfit for trial due to poor health.

Last week, Nuon Chea and Khieu Samphan began their second trial at the court on charges including genocide of Vietnamese people and ethnic Muslims, forced marriages and rape.

The complex case against them was split into a series of smaller trials in 2011 for reasons including their advanced age and the large number of accusations.

Led by "Brother Number One" Pol Pot, who died in 1998, the Khmer Rouge dismantled modern society with regime atrocities affecting virtually every family in Cambodia.

In its breakthrough first trial, the court in 2010 sentenced former prison chief Kaing Guek Eav, better known as Duch, to 30 years in prison -- later increased to life on appeal -- for overseeing the deaths of 15,000 people.