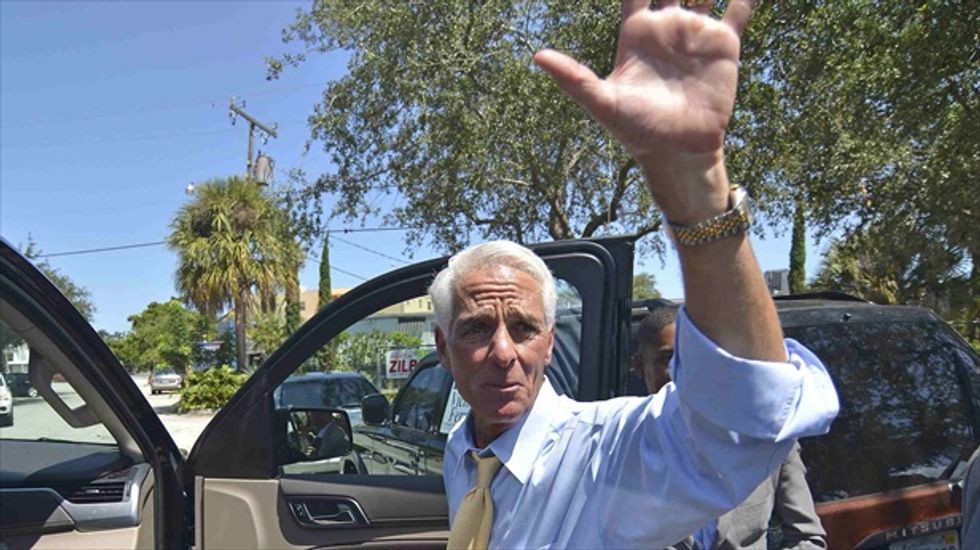 TAMPA Fla. (Reuters) - Charlie Crist won the Democratic nomination for Florida governor on Tuesday, defeating his primary challenger with almost 75 percent of the vote and setting the stage for a nationally watched governor's race.

Republican Governor Rick Scott easily cruised toward victory with more than 87 percent of the vote over two little-known primary opponents.

Voter turnout was low - under 17.5 percent - in an election lacking tight races at the top of the tickets to help draw voters.

With Scott and Crist virtually tied in polls, the race is shaping up as one of the most expensive gubernatorial contests, with both parties seeking a major bully pulpit going into the 2016 presidential elections in the nation's most populous swing state.

Primary vote results provide an initial gauge of Democratic enthusiasm for Crist, who governed Florida as a Republican from 2007 to 2011 and now wants the job back under a different party label.

Crist largely ignored a primary challenge from Nan Rich, a former state legislator from south Florida who in conceding called on her supporters to help vote out Scott.

"I entered this race to defeat Rick Scott and to get Florida back on the right track," Rich said at an election night event. "That is the goal that I remain committed to."

General election themes have been the focus of an already blistering televised ad campaign, with Scott and Crist bashing each other’s records on everything from taxes to jobs, education and energy policy.

"The next few months are about talk versus action," Scott said in a statement. "Florida will have a choice between a governor who sent our state into a tailspin and a governor who gets results."

Votes cast against Crist will be scrutinized to reveal his ability to galvanize the base of a party he only recently joined after spending most of his political life as a Republican, said Daniel Smith, a political science professor at the University of Florida in Gainesville.

"He has not played to the base as he has to the middle," Smith said. "In doing so, he risks alienating those core Democrats he is going to need in the general election."

Early voting results indicated low voter turnout, especially in the Democratic stronghold in south Florida, which could be crucial to the party's chances in November.

Florida Democratic leaders, seeking to move quickly past the primary, have plans for unity rallies featuring both candidates on Thursday in Orlando and Fort Lauderdale.

"With Charlie Crist as our nominee, Democrats are fired up, ready to work hard, and ready to win in November," said Florida Democratic Party Chair Allison Tant in a statement.