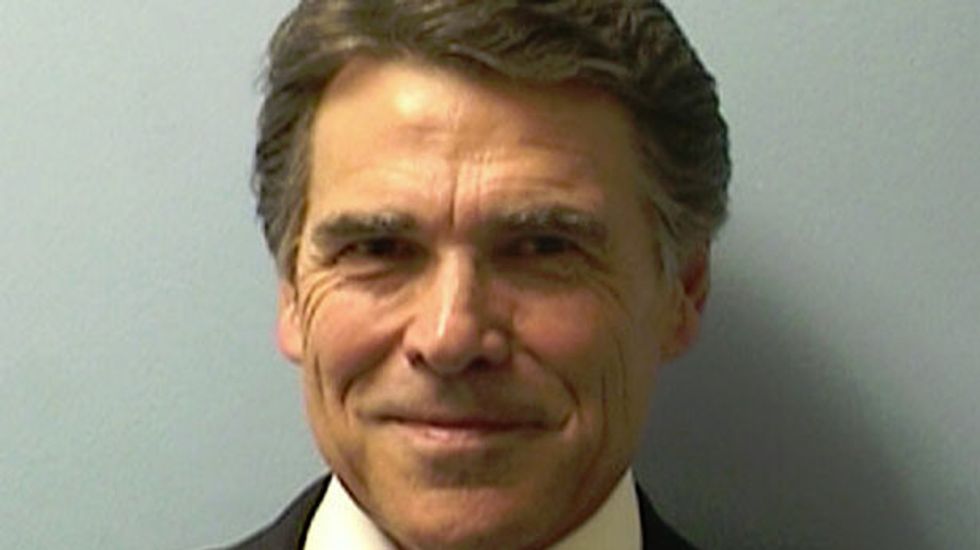 AUSTIN Texas (Reuters) - Texas Governor Rick Perry, a possible Republican presidential candidate in the 2016 race, was fingerprinted and had his mug shot taken by judicial authorities on Tuesday after being indicted last week on two felony charges of abusing power.

"The actions that I took were lawful. They were legal and they were proper. This indictment is fundamentally a political act that seeks to achieve at the courthouse what could not be achieved at the ballot box," Perry said after finishing the 15-minute processing at the Travis County criminal justice center, a short walk away from the governor's mansion.

Supporters turned out to cheer his words while his opponents relished seeing him face a criminal court.

The indictment has cast a shadow over a presidential run for Perry, who has ranked near the bottom of possible Republican candidates. Experts predict that legal wrangling in the case is likely to stretch into the 2016 election cycle.

Perry was indicted on Friday by a grand jury in Travis County, a Democratic stronghold in the heavily Republican state, over his veto of funding for a state ethics watchdog that has investigated prominent Texas Republicans.

Perry, the longest-serving governor in the state's history, became the target of an ethics probe last year after he vetoed $7.5 million in funding for the state public integrity unit run from the Travis County district attorney's office.

The veto was widely viewed as intended to force the resignation of county District Attorney Rosemary Lehmberg, a Democrat, after she had pleaded guilty to drunken driving but remained in office.

Democrats have said Perry may have been looking to put an ally in charge of the unit, extending what they say is cronyism in his administration.

The more serious of the two felony charges carries a prison sentence of five to 99 years.

"This may be a sideshow to Rick Perry but no amount of spin can cover up two felony charges," Democratic National Committee spokesman Michael Czin said.

Perry could try to rally support in Republican primaries by portraying himself as a conservative victim of a partisan legal attack launched by Democrats, analysts have said. But the indictment could undermine backing from major donors and party heavyweights who see the legal case as hurting his general election chances.

After flaming out in a gaffe-strewn campaign for the 2012 Republican presidential nomination, Perry has been attempting a political comeback that gained him national attention for accusing President Barack Obama of doing too little to secure the U.S.-Mexico border.

He will step down as governor when his term ends early next year.