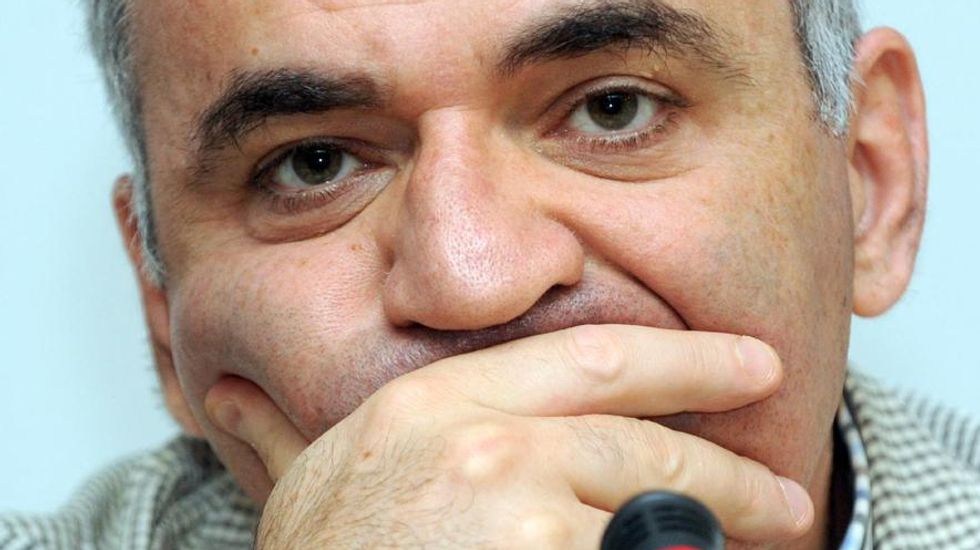 Legendary former chess champion Garry Kasparov will on Monday attempt to seize the sport's top job from a man who claims he was abducted by aliens and is accused of being a Kremlin puppet who built ties to the world's most brutal dictators.

For the past 19 years, the presidency of the World Chess Federation has been held by Kirsan Ilyumzhinov, an eccentric former president of Russia's only Buddhist region -- Kalmykia.

The 52-year-old claims he was once abducted by aliens who communicated telepathically and took him to another planet in a giant spaceship.

But his greatest challenge may come on Monday, when the most famous name in chess, former world champion Kasparov, tries to oust him from the federation presidency in a battle that carries echoes of Cold War chess confrontations.

The showdown will take place on the sidelines of the Chess Olympiad in the Norwegian city of Tromsoe, deep inside the Arctic Circle.

Kasparov, 51, is one of Russia's most vocal dissidents, labelling the government of President Vladimir Putin a "dictatorship" and decrying his country's slide towards "fascism".

He accuses Ilyumzhinov of being too close to Putin and that his leadership of the 181-country World Chess Federation has been marked by "abuse and favouritism".

"Every Russian embassy in the world has been mobilised to support Mr Ilyumzhinov and to keep him in office," he told Norwegian newspaper Dagbladet this week. "It's not about chess. This is a pure political fight."

Ilyumzhinov has been accused of damaging the reputation of the chess federation by cultivating close ties to some of the world's most brutal dictators including Saddam Hussein and Moamer Kadhafi, at precisely the moments when they were facing the strongest international opposition.

At the height of NATO bombardments of Tripoli in June 2011 he travelled to the Libyan capital to play a highly publicised chess game with Kadhafi, granting him the title of "International Grandmaster".

Some see the hand of the Kremlin behind Ilyumzhinov's chess diplomacy.

"Putin, Russia, Ilyumzhinov -- it's all connected," said Gerard Demuydt at the chess magazine Europe Echecs, adding that his poor choice of friends has impoverished the game.

"If you search for Ilyumzhinov on Google, you'll find his name associated with aliens, Saddam Hussein and Kadhafi. That scares off sponsors that could contribute to developing the game and it restricts Ilyumzhinov's access to funding from Russian companies and unscrupulous people."

Ilyumzhinov does not shy away from his support for the Kremlin.

"I am a patriot of Russia," he recently told the New York Times. "I love my country. Kasparov, who grew up in this country, received an education here, became a champion here, who was receiving money here, from my own hands -— he is praised for struggling against Russia and its people. Isn’t it crazy?"

Putin has made no official statement about the chess presidency, but is thought to strongly back Ilyumzhinov.

Chess has long political roots in Russia, dating back to early Soviet times when chess academies across the USSR sought to ensure the country's dominance of the game as a way of demonstrating intellectual superiority over the West.

The spell was broken with the dramatic defeat of Boris Spassky at the hands of American Bobby Fischer in the 1972 World Chess Championship in Iceland.

Kasparov, who has lived in exile in the United States since 2013, is seen as the underdog in the fight for the federation presidency, since the incumbent has built close ties with small national bodies around the world.

The campaign has become a dirty fight, marred by allegations of threats and vote-buying, with many complaining that egos have become more important than the game.

Bachar Kouatly, a former French grandmaster and an editor at Europe Echecs magazine, said both men are equally ruthless.

"Kasparov is a useful idiot for Putin," said Kouatly. "He deflects the Western media's attention from the real Russian opposition."