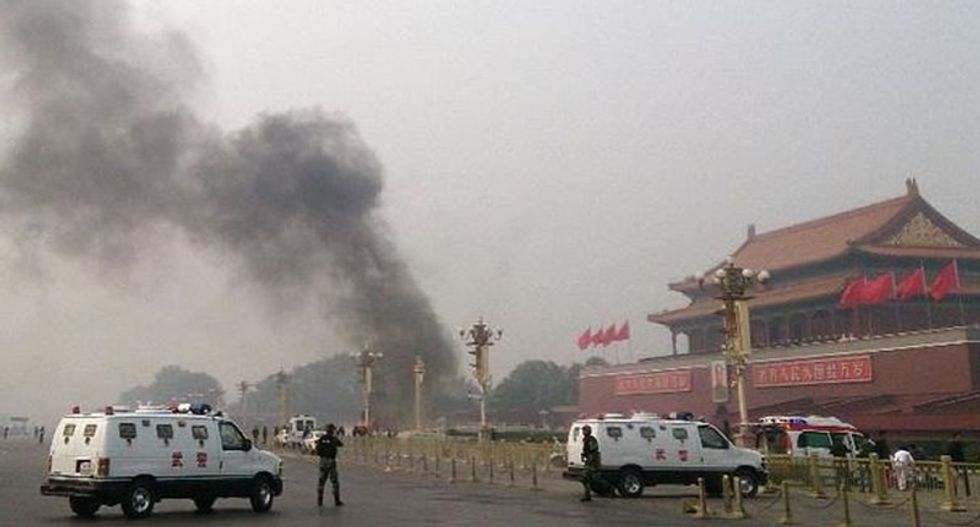 ["Police cars block off the roads leading into Tiananmen Square after a vehicle crashed in front of Tiananmen Gate in Beijing on October 28, 2013" via AFP]

China has executed eight people for "terrorist attacks", including three it described as "masterminding" a suicide car crash in Beijing's Tiananmen Square in 2013, state media announced.

The official Xinhua news agency said early Sunday that the eight were involved in several cases connected to the northwestern region of Xinjiang, where Beijing says separatist militants are behind a string of attacks that have rocked China in recent months.

Three of the condemned, named by Xinhua as Huseyin Guxur, Yusup Wherniyas and Yusup Ehmet, had been "deprived of political rights for life" at the time of being sentenced to death for their role in the assault in Tiananmen Square in October.

"They masterminded the terrorist attack" at Tiananmen Square, Xinhua said.

Two tourists were killed in the attack, in which a car rammed into bystanders on the iconic square in the heart of Beijing before bursting into flames.

Xinhua said five others were executed, including Rozi Eziz, who was convicted of an attack on police in Aksu in 2013.

Abdusalam Elim was executed on charges of "organizing and leading a terrorist organization", Memet Tohtiyusup had "watched audio-visual materials on religious extremism" and "killed an innocent civilian" in 2013, and Abdumomin Imin was described as a "terrorist ringleader" who led Bilal Berdi in attacks on police in 2011 and 2013.

Xinhua, which cited the Xinjiang region publicity department in its report, did not say when the executions were carried out.

Dilxat Raxit, a spokesman for the World Uyghur Congress exile group, in an email blasted the legal process surrounding the executions, calling it a "typical (case) of justice serving politics".

The sentences underscore the tough approach Beijing is taking to increasingly brazen and violent incidents.

The Tiananmen attack was one of several that have rocked China since last year, and which Beijing has blamed on Xinjiang separatists.

The far-western region is the resource-rich homeland of the Uighurs and other groups, and periodically sees ethnic tensions and discontent with the government burst into violence.

In March, a horrific knife assault at a railway station in the city of Kunming in China's southern Yunnan province left 29 dead and 143 wounded.

Two months later, 39 people were killed, along with four attackers, and more than 90 wounded when assailants threw explosives and ploughed two off-road vehicles through a crowd at a market in Xinjiang's capital Urumqi.

Chinese courts, which are controlled by the ruling Communist Party and have a near-perfect conviction rate, frequently impose death sentences for terror offences.

The executions and sentences are part of a crackdown that comes after Beijing vowed a year-long campaign against terrorism in the wake of the Urumqi market attack.

In June, 13 people were executed for Xinjiang linked terrorist attacks.

Beijing does not say how many people it executes each year. But independent estimates put the total at around 3,000 in 2012, a figure higher than all other countries combined.

Exile groups say cultural oppression and intrusive security measures imposed by the Chinese government are the main causes of tension in Xinjiang, along with immigration by China's Han ethnic majority, which they say has led to decades of discrimination and economic inequality.

Beijing, however, stresses ethnic harmony in the region and says the government has helped improve living standards and developed its economy.

["Police cars block off the roads leading into Tiananmen Square after a vehicle crashed in front of Tiananmen Gate in Beijing on October 28, 2013" via AFP]