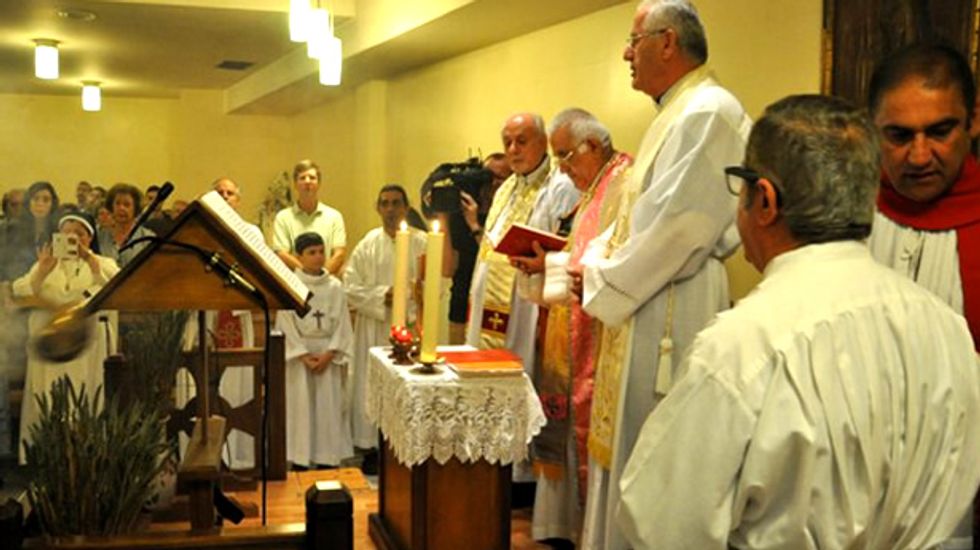 A framed painting of the Virgin and Child in the eastern iconic style looks down on the congregation gathered in a modern, minimalist Chaldean Catholic church in Paris as the Sunday service starts under the glare of news cameras.

The faithful at Notre-Dame de Chaldée in northern Paris have gathered thousands of miles away from their besieged homeland to pray for what remains of their ancient community as headlines proclaim, “The End Days for Iraq’s Christians”.

As hundreds of thousands of Iraqi Christians flee the ISIS (Islamic State in Iraq and Greater Syria) assault on their towns and villages – the latest spurt of an exodus that began after the 2003 US invasion – the community finds itself increasingly gathering at services across Western Europe and North America, far from their historic churches and monasteries in northern Iraq.

But when the congregation, in unison, sings, “Kandisa Alahaye, Kandisa Hylsana” -- a hauntingly beautiful prayer in Aramaic that has been sung for centuries in eastern churches from Mosul to the Malabar Coast -- the room is transported to a place that transcends geography.

In the front row at the Sunday service, the Younan family joins in the singing, aware that they are the focus of the news teams in the church and patiently willing to be spokespeople for their embattled community back home.

“Thanks to God and thanks to the government of France, we are here today,” said Nabeel Younan, 51, speaking to reporters outside the church shortly before the service started. “But unfortunately, not everyone in the community is safe.”

Younan is among 11 Iraqi Christians who arrived in Paris on August 7, days after the French government announced it was ready “to help facilitate asylum” for those fleeing the ISIS (also known as Islamic State) persecution of minorities in Iraq.

The Sunday service came as French Foreign Minister Laurent Fabius said France was prepared to join multinational humanitarian efforts during a one-day visit to Iraq – which included stops in Baghdad and Arbil, capital of the northern Kurdish region.

The visit came amid mounting concerns over the fate of tens of thousands of Yazidis, a marginalized, often-persecuted minority group, who have fled into the mountains of northern Iraq.

Arbil was on the frontline of an ISIS onslaught that has been stalled by US airstrikes on ISIS artillery positions over the past few days.

But while Younan is grateful for the latest international intervention, he repeatedly stressed that it was not enough.

“It arrived too late. Daesh is very mobile, they don’t have fixed positions,” said Younan, referring to ISIS by the Arabic acronym commonly used by opponents of the militant group. “I believe the big [world] powers must send soldiers on the ground. Airstrikes are just a temporary solution. We don’t want condemnation and declarations, we want action.”

‘Mosul is now empty of Christians’

A native of Mosul, Younan fled the capital of Iraq’s northern Nineveh province in 2008 after his uncle, Archbishop Paulos Faraj Raho, was kidnapped by armed gunmen. The abductors ambushed the cleric’s car shortly after he had led the Stations of the Cross procession at Mosul’s Cathedral of the Holy Spirit.

The archbishop’s mutilated body was found days later in a shallow ditch.

While the recent ISIS assault has put Christians in northern Iraq in a critical state, the community has been threatened since the 2003 US-led invasion, with increasing numbers fleeing the sectarian violence and lawlessness that has plagued the country over the past decade.

Before 2003, Mosul was home to around 60,000 Christians, according to Patriarch Louis Sako, head of the Chaldean Catholic Church.

‘Christians of Mosul did not succumb to terrorists’ threats’

For Younan, his life in Mosul appears to be a thing of the past. When asked if he considers going back to Iraq, the deeply religious man murmurs in Arabic, “Insha’allah, if God wants me to return, it’s in his hands. But right now, there’s very little hope,” he explains.

Just days after his arrival in France, Younan’s focus is on providing his wife, Bassima Hazim, and their two teenage children with a fresh start.

“My children stopped their studies,” he explains, recounting the family’s long, six-year journey from Mosul to Paris via war-torn Syria. “Now, they can continue their studies.”

Younan’s theme of revival was mirrored in the homily, delivered by Msgr. Raphael Kutaimi, former rector at the Chaldean Catholic Cathedral in Baghdad, who survived a 2011 al Qaeda attack that killed 44 worshippers, two priests and seven security personnel during a service.

“Everyone is asking us, what now? Is the community dead? But Christ is in our hearts. The Christians of Mosul did not succumb to the terrorists’ threats, they did not renounce their faith,” said Kutaimi. “That’s the joyous news. That’s a source of hope – whether we are in France, in Europe or America. Christ will protect us, he gives us courage.”

Dressed in their Sunday best, the Younan family appears transfixed by the homily. It’s a fitting theme for a family about to start a new life in the West.

For the moment at least, the images of shuttered churches, destroyed relics and empty villages in their ancient homeland have been put aside.

In their 2,000-odd-year history, Christians of the region have survived persecutions and calamities.

Only time can tell whether the latest conflict will spell the death knell for northern Iraq’s Christians or whether the silenced church bells will one day toll again.