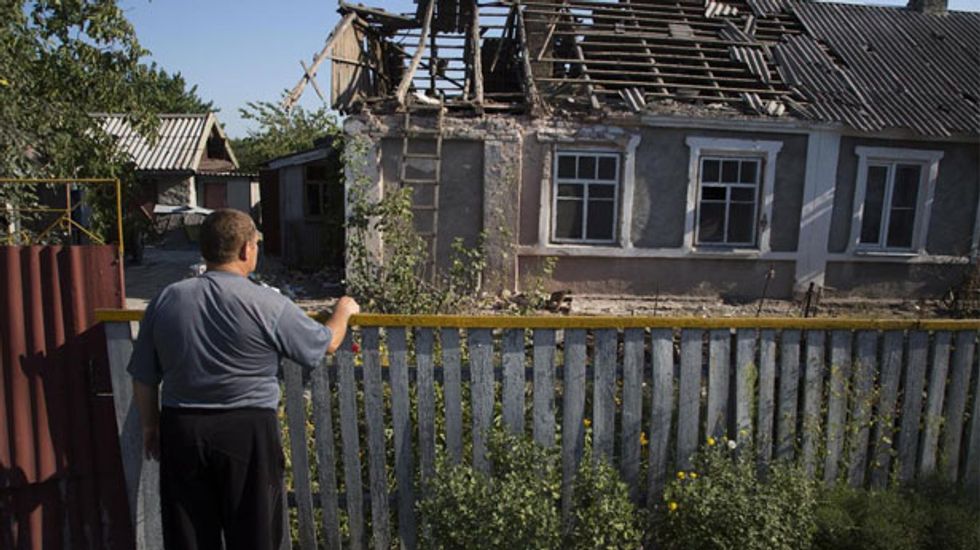 At least two civilians were killed in heavy clashes on the outskirts of the main rebel-held bastion of Donetsk in east Ukraine on Tuesday, as the UN warned of a "massive exodus and destruction" if fighting intensified.

Powerful explosions rocked the western Petrovksy suburb of the sprawling million-strong city, the local administration said, as government forces pushed on with an offensive to oust insurgents.

Earlier, dozens of cars packed with terrified residents could be seen fleeing the industrial hub via a perilous humanitarian corridor that ran close to the scene of the clashes.

Ukraine's military called on insurgents in Donetsk, Lugansk and another frontline city, Gorlivka, on Monday to open corridors for several hours each day to allow civilians to escape.

But even as fleeing residents were supposed to be given free passage between 10 am and 2 pm out of the pro-Russian stronghold, explosions rumbled on along the road in the town of Maryinka.

"We are trying to leave," said a tearful elderly woman travelling with a group of people in a taxi. Asked where they were heading, she replied: "Wherever we can get to."

At a Ukrainian military checkpoint -- consisting of five tanks in a sunflower field -- cars started building up, one with children's pushchairs on the roof and many with elderly people inside.

At another checkpoint, a rebel commander told AFP: "We are not stopping anyone, everyone leaves freely. They go every day."

Some vehicles bore white scarves to mark them out as civilians. Smoke from the fighting could be seen on both sides of the otherwise deserted road.

Ukrainian forces announced Monday they were closing in around Donetsk, after already scoring significant gains over the last month.

But the rebels have pledged to fight on in the cities under their control, and government forces continue to come under heavy bombardment from separatist positions.

Ukrainian forces retreated from the town of Yasynuvata north of Donetsk, which they took a few days ago, to avoid putting the population at risk, security spokesman Andriy Lysenko said Tuesday.

In the past 24 hours, three Ukrainian soldiers were killed and 46 injured, he said.

More than 1,150 people, mainly civilians, have died since the civil war erupted in mid-April.

The United Nations' refugee agency warned that continued fighting in eastern cities "could lead to a massive exodus and massive destruction".

Some 285,000 people have already fled their homes due to the conflict in east Ukraine, it estimated, with many leaving for other parts of the country, but close to 168,000 seeking sanctuary in Russia.

In Lugansk, the rebels' second largest city, local authorities said Tuesday that nearly half the population had fled amid warnings of a "humanitarian catastrophe".

The city of 420,000 has been without power, running water, Internet or phone lines for three days, they said.

Human Rights Watch meanwhile said that rebels were hampering the work of medical services in the industrial east, hijacking ambulances to transport fighters and stealing equipment in what could amount to war crimes.

"This appalling disregard of people who are sick or wounded can be deadly and needs to stop immediately," said HRW's Europe and Central Asia researcher Yulia Gorbunova.

Tensions between Russia and the West have soared to their worst point since the Cold War over the fighting in Ukraine, with the United States and the EU slapping punishing sanctions on Moscow over its alleged support for the rebels.

Russian President Vladimir Putin ordered his government Tuesday to draft a response to the sanctions, which have already forced a subsidiary of national carrier Aeroflot to ground all flights.

In a move that Ukraine's ministry of defence deemed "a provocation", Moscow has also begun large-scale military exercises in southern Russia set to last until Friday.

Meanwhile, 110 experts from the Netherlands, Australia and Malaysia continued to comb for remains and belongings of the victims of flight MH17, which was shot out of the sky on July 17, killing all 298 people on board.

The US believes it was downed by a surface-to-air missile fired by rebels and supplied by Russia, but the rebels and Moscow blamed the Ukrainian military.