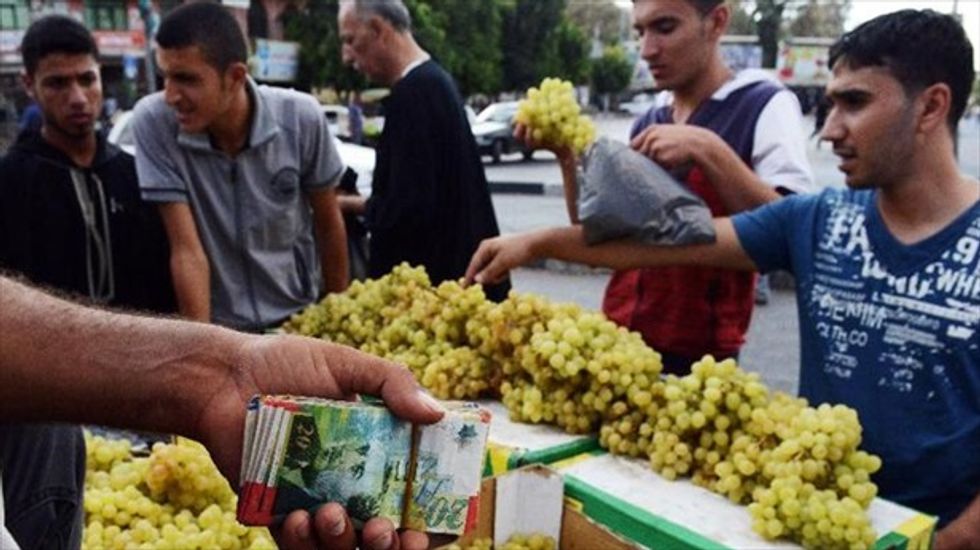 Ramallah (Palestinian Territories) (AFP) - In Gaza, Israelis and Palestinians are battling it out with rockets and air strikes. But in Israel and the West Bank, the two sides have found a new weapon: boycotting.

Local products are flying off the shelves in the occupied West Bank while Israeli goods are being left untouched.

And in Israel, Arab shops are deserted -- even on shabbat, the Jewish day of rest, when Arab Israeli businesses have always made their biggest takings.

"These days I have changed my habits. Because of the Israeli war against Gaza, we stopped buying any Israeli products," said Salah Mussa, a Ramallah resident.

"Now we are only buying Palestinian products. This is not only my decision, it's a family decision."

Known as the BDS movement -- boycott, divestment and sanctions -- it aims to put political and economic pressure on Israel over its occupation of the Palestinian territories in a bid to repeat the success of the campaign which ended apartheid in South Africa.

Now, spurred on by the recent bloodshed in Gaza, the campaign is making its first inroads in the West Bank where locals have had little alternative to Israeli products due to import restrictions.

Omar Barghouti, a Palestinian human rights activist and co-founder of the BDS movement, believes the deaths of more than 2,000 people in Gaza has changed the picture and will lead to a sustained boycott campaign.

"The massacre committed by the Israeli regime ... in Gaza has triggered almost unprecedented popular campaigns of boycott against Israeli companies and institutions," he told AFP.

The movement, he says, is working to ensure the boycott lasts "well after the end of the current phase" of the Gaza war.

To boost the campaign, the boycott is being widely publicised through television ads as well through social media.

And in shops across the West Bank, Israeli products have been slapped with labels reading: "Boycott Israel" and "For your information: in buying this product, 16 percent of the price goes to the Israeli army."

Other shops have gone even further and taken Israeli products off the shelves.

"We have completely removed Israeli products from the supermarket and replaced them with local substitutes," explained Nidal Hamerani, manager of a Ramallah supermarket.

Boycotting Israeli products is also a way of strengthening the Palestinians economy which has been badly stifled by restrictions imposed by the Jewish state, says campaigner Riyad Hamad.

"We need to make people aware of the damage they cause to the Palestinian economy when they buy Israeli products: a high unemployment rate and a ravaged economy," he told AFP.

The boycott has already paid dividends for some Palestinian businesses.

Pinar, a Ramallah-based firm which manufactures diary products, has already had to increase its number of employees, who are working round the clock to meet the surge in demand.

Managing director Muntasser Bedarna says production had increased by "between 30 and 40 percent".

He believes that Palestinian dairy producers now hold "a 60 to 65 percent market share of the milk market in the West Bank and Gaza.

"Before the boycott, Israel controlled 60 percent while the Palestinians shared the remaining 40 percent," he told AFP.

Avi Nudelman, former head of the Israeli-Palestinian Chamber of Commerce, says the boycott is unlikely to have much of an effect on Israel's economy.

"It's a nice idea but it won't last long," he said. "The Palestinian sector is only a tiny part of the overall market for Israel."

Data from Israel's Central Bureau of Statistics show that in the first quarter of 2014, the Jewish state exported $816 million worth of goods to the Palestinian Authority.

The overall volume of Israeli exports in the same period was $12.9 billion, meaning trade with the PA accounted for around 6.3 percent of the total.

On the Israeli side, Foreign Minister Avigdor Lieberman, known for his bellicose anti-Arab statements, called on the public to boycott Arab businesses after the community staged a one-day solidarity strike early on in the war with Gaza.

At the Arab market in the northern port city of Haifa, William Rahil who runs the Mama Pita eatery says he has lost "100 percent" all of his Jewish customers.

Next to his restaurant, someone has put up a sign requesting donations for medicine for the children of Gaza, which he says has sparked calls to boycott his restaurant and even extreme postings calling for the air force to "blow up Mama Pita," he told AFP.

At a cafe nearby, Fawzi Hanadi said he'd lost "50 percent" of his customers since the beginning of the Israeli offensive which began on July 8.

Effects of the boycott can also be seen on the roads where Jewish taxi drivers display Israeli flags in order to attract customers who don't want to pay an Arab driver.

For Arab Israeli MP Bassel Ghattas, the boycott is reason to reflect on the economic contribution of Israel's Arab minority who represent about 20 percent of a population of around 8 million people.

The descendants of the 160,000 Palestinians who remained on their land after the creation of Israel in 1948, Arab Israelis account for around $14 million of consumer spending every year, he said.