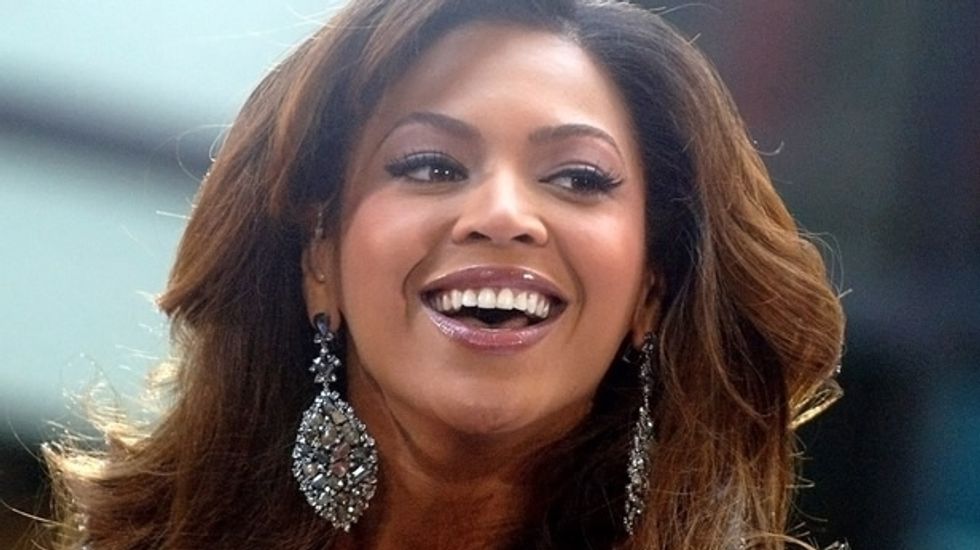 Beyoncé did her song "***Flawless" last night as part of a bigger---20 minutes!---set at the MTV Video Music Awards, and clearly conservatives are threatened. I expect that this is going to get ugly quickly, but the initial reaction is to try to deny that she could be a feminist because, of course, she likes sex. There's no doubt that having Beyoncé out there hyping feminism is a big deal, so conservatives are desperately trying to take it away by claiming that she's not really a feminist, because they, as people who hate feminism and want to wipe it out, are the self-appointed arbiters of what feminism is. To which I kindly say, fuck off. Misogynists don't get to define feminism, not now and not ever.

Fox News claims that the performance set off "eye rolls":

Clad in just a sparkly leotard and flanked by several other minimally dressed females and a few bare-chested males, the performance featured every song from her “Beyonce” album – along with a smorgasbord of gyrations, leg spreads, stripper poles, body rubbing and pelvic rolls.

The popular entertainer also seemed to ensure her behind was the focus on each song, all the while educating young viewers about feminism through the words of the Chimanda Ngozi speech she borrows in the track “***Flawless.”....

Only amongst assholes and cats, who are generally confused about feminism. It's hilarious watching the very same people who are screaming that you must be some kind of horrible slut if you think women should get birth control turn around and say that feminism should be anti-sex because reasons. They really can't decide if feminism is evil because feminists like sex or if feminists are hypocrites because they like sex (and therefore evil). There is confusion here, but it's not because of anything feminism is about, but about anti-feminists and their utter inability to decide if liking sex is how feminists oppress men or not liking sex is how feminists oppress men. Get your lies straight, assholes! This is getting tiresome.

Then there's Twitchy, rounding up people who are "confused", by which I mean they're not confused but are just misogynists who are pretending to be confused in order to confuse the issue.

Silly me, I thought #Feminism would involve more clothes. RT @SooperMexican: sure. why not? #VMAs pic.twitter.com/g6lcDiV7jR

No, that's actually the misogynist fundamentalist religions you're thinking of.

I might disagree with her politics, but Sandra Fluke is looking F I N E. pic.twitter.com/74bn7tj1DE

The attempts to objectify and reassert male power are pretty pathetic, actually. But overall I'm happy about this tweet, because at least Jon Gabriel has decided which narrative about feminism he's committed to, which is the claim that feminism is gross because it supports lady sexuality and women shouldn't be having sex basically ever. I'm much happier when conservatives are flinging the word "slut"---or "Sandra Fluke", their new euphemism for "slut"---around, because it's nice and clarifying. Pretending they're the ones who are pro-sex and feminists are the ones who are anti-sex is just so obviously untrue and reeks of desperation. Let's just drop the pretense and accept that the people who want you to have contraception are, as a rule, way more pro-sex than the people who are busy trying to find ways to cut your insurance coverage for it.

To be completely fair, there are and will likely continue to be feminists who can't tell the difference between sexual objectification and just sexiness and therefore get mad at both, which is where this right wing meme about "confusion" comes from. (Though they really aren't confused, as all these responses make clear: They're against sexual liberation and female empowerment, and  Beyoncé pisses them off as she pushes for both.) But it's utterly dishonest at this point to suggest that feminists who conflate every expression of sexual desire with sexual objectification are the ones who are running the conversation.

I'm grateful to Beyoncé for really putting forward, particularly with this latest album, a strong vision of female sexuality that is about demanding equality, centering female pleasure in women's experience, and also knowing that it's fun to dance and show off your body---more fun if you're the one in control of the situation . Objectification is about being reduced to an object. Beyoncé is doing quite the opposite, asserting that sexiness can be part of a package of a whole human being whose sexuality is, above all other things, about claiming joy and pleasure for herself. Anyone who looks at her and sees an object has revealed far more about themselves---and their inability to ever see women as people---than about her.