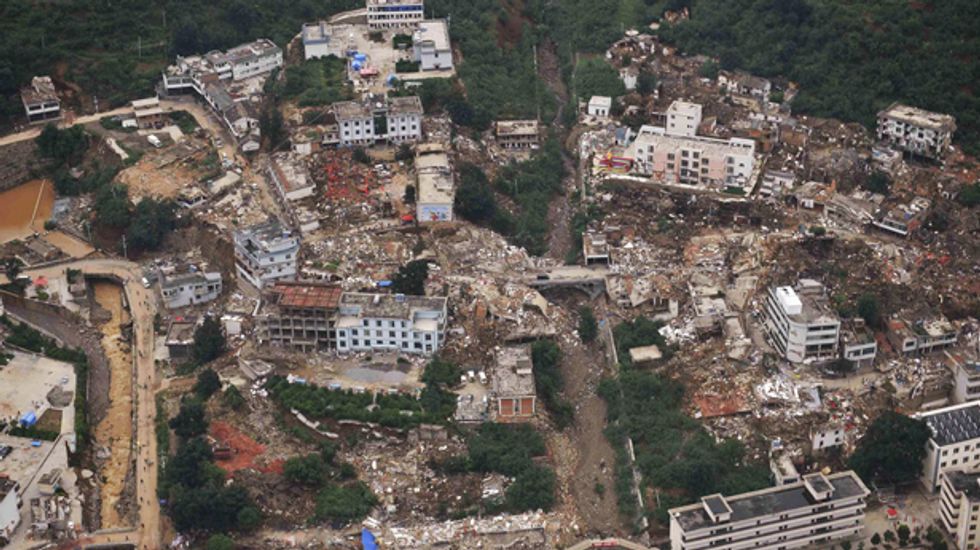 The death toll from an earthquake that devastated a remote region of China jumped to nearly 600 people on Wednesday, authorities said, as volunteer rescuers were warned away.

Rescue efforts in the southwestern province of Yunnan, where the 6.1-magnitude quake struck Sunday, were heavily hampered by traffic delays and landslides blocking roads.

At least 589 people had been confirmed killed as of Wednesday morning, China's ministry of civil affairs said on its website, marking a sharp increase in the death toll.

The ministry added that 2,401 people were injured and 230,000 had been evacuated, while more than 80,000 homes had fully or partially collapsed.

No explanation was given for the sudden increase from a toll of 410 given on Tuesday, though rescuers have steadily been pulling corpses from the wreckage.

In Longtoushan, at the epicentre of the quake, the body of a young child was pulled out in front of relatives wailing in grief late Tuesday night.

Hundreds of survivors gathered in dozens of blue tents Wednesday, with some quietly sobbing as staff distributed wheat buns, an AFP photographer saw.

Search efforts in Longtoushan were being concentrated in a 600-metre swathe of hillside in the township's central urban area.

Residents in the area told AFP that school dormitories had collapsed in the quake, echoing a 2008 disaster in Sichuan which killed more than 80,000 people, thousands of them children who died as their cheaply built schools crumbled.

China called for civilian volunteers to stay away from the disaster zone as traffic blocked supply routes and "substandard" relief goods flooded into the area.

More than 18,000 professional rescuers have headed to the disaster zone, state media said, most of them military and police.

But huge tailbacks have developed around the worst-hit areas, mainly consisting of cars driven by members of the public bringing in supplies or offering help.

Workers have also been halting traffic to set off explosions on the mountainsides to dislodge huge boulders perched precariously over roads.

Pang Chenmin, head of the ministry's disaster relief bureau, urged the public to avoid the disaster zone as the 72-hour "golden period" for rescue drew to a close.

"In order to ensure the best chances of rescuing survivors, we advise non-professional groups and volunteers against entering the quake zone by themselves so as not to cause traffic and communication difficulties," he said, according to the official news agency Xinhua.

Many volunteers who walked or hitchhiked to Longtoushan have slept out in the open, or entered tents used by survivors.

Some brought their own vehicles into the worst-hit areas, carrying in goods such as fizzy drinks.

"Some relief materials are unfit for use in disaster areas, some are substandard products, some are overly abundant and take up precious space and traffic resources," added Pang.

Some civilian volunteers, who had arrived with little or no equipment, were already leaving the zone.

The 2008 Sichuan disaster -- China's worst quake since 1976 -- sparked a wave of public sympathy and a huge volunteer rescue effort.

Subsequent earthquakes have seen problems with volunteers, who have sometimes been labelled "disaster gawkers" by Chinese media.