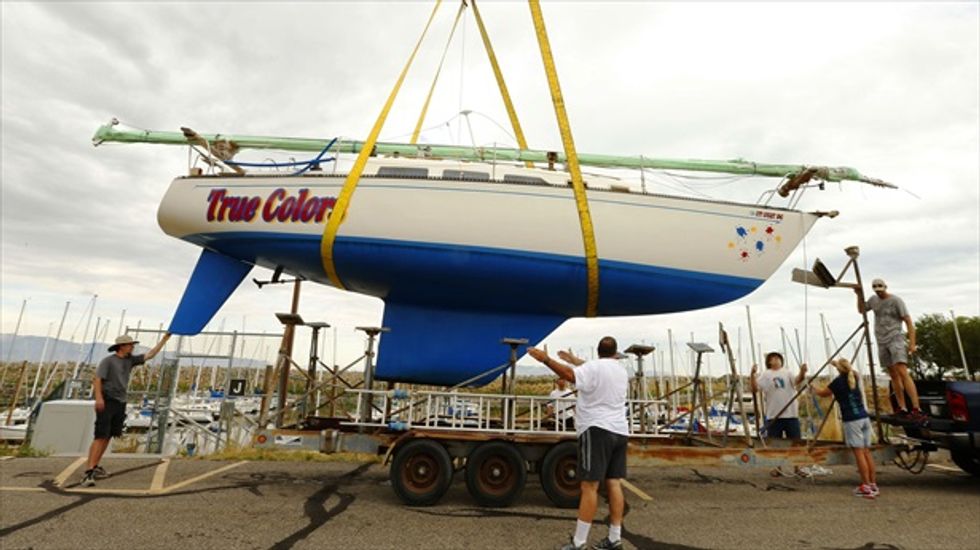 SALT LAKE CITY (Reuters) - Drought forced an early end to the sailing season for some Utah enthusiasts on Monday as a huge crane lifted boats out of the Great Salt Lake State Park Marina, where officials say the water is at its lowest level for more than 50 years.

"We've had a couple of tough winters here," said harbor master Dave Shearer, watching as the crane gingerly raised a 37-foot Ranger sailboat out of its slip then lowered it onto a trailer in the parking lot.

"Some of the deep draft boats are having to pull out now, rather than make the hard choice of having their keels stuck in the mud all winter 'til the lake comes back up."

Fed by four rivers and a handful of streams, the Great Salt Lake sits about 20 miles west of Salt Lake City, stretching 75 miles long and about 35 miles wide.

Its deepest point is only about 35 feet, and its shoreline can grow or recede dramatically depending on the annual influx of snowpack runoff.

So far, that has forced about 70 boats from the 320-slip marina, where water levels have been dropping consistently.

"You can attribute this to persistent drought over the past 10 years," said Paul Miller, a hydrologist at the National Weather Service's Salt Lake City office.

"There's been a few high years, but even those just haven't been enough to make up for those persistent dry ones."

In 2013, the annual snowpack hit about 125 percent of normal in some of Utah's mountains. But most of that never made it to the lake, U.S. Geological Survey (USGS) hydrologist Cory Angeroth said.

Instead, that moisture mostly went back to the aquifer or into the state's reservoirs.

Ian Jacobson, 25, is not planning on waiting. He pulled his 27-foot Catalina out of the marina on Monday and is fast-forwarding plans to move to the Oregon coast. Jacobson bought the boat back in March and is just learning to sail.

[Image: A large crane lifts a boat out of the Great Salt Lake Marina and puts it on a trailer because of low water levels, west of Salt Lake City, Utah, August 4, 2014. By George Frey for Reuters]