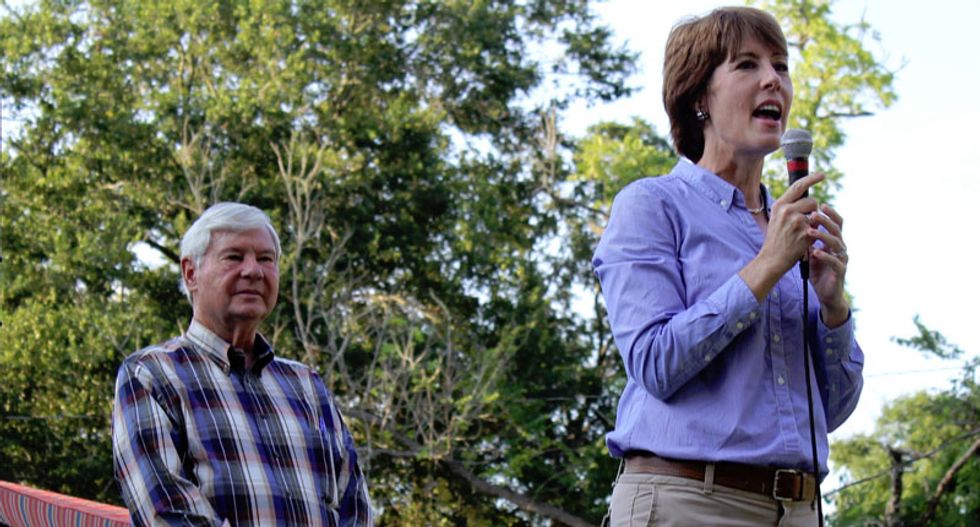 Bob Graham, the popular former governor and long-time U.S. senator, features prominently in his daughter's challenge to a Tea Party conservative, one of the nation's most closely watched races that is offering Democrats a rare chance to unseat a southern Republican in the U.S. Congress.

Father and daughter appear together in televised ads introducing the first-time political candidate, who says: "I'm Gwen Graham, and Dad and I approved this message."

"People understand what a Graham Democrat is," Gwen Graham said in an interview, highlighting her father's legacy as a hard worker and consensus builder in nearly four decades in office.

"That is what people want to get back to," she said. "They know that I am someone they can trust."

The enduring appeal of the Graham name has surprised pundits and raised Democratic chances in a politically divided district, testing the party's ability to reconnect with traditional, white southern voters who have largely abandoned its national ticket.

Despite strong headwinds favoring Republicans in the midterm elections, the Washington-based Cook Political Report recently switched the race from "lean Republican" to "toss-up."

"This is really the only race in the country where a Democratic challenger has made significant progress," said David Wasserman, Cook's U.S. House editor, noting that early polls show a tight race, shifting his initial skepticism of Graham's chances in the conservative Florida Panhandle.

"If Graham wins, the story really is that candidates still do matter," he said.

Graham, a 51-year-old-lawyer and mother of three, paints herself as an independent voice for "the North Florida Way." She says implementation of the Democratic party's signature healthcare reforms was a disaster, but she wants to fix rather than repeal the Affordable Care Act.

"People want someone who is putting aside the partisanship and doing the right thing for them," she said.

She and her father, who chaired the Senate Select Committee on Intelligence and ran for president before retiring in 2005, disagree on gun control issues. Graham said her husband, a lawyer working for state law enforcement, has influenced her support of gun ownership rights.

Graham spent much of her childhood in the district while her father served in the state capital in Tallahassee. She still lives in the district's liberal anchor, packed with college students and black voters.

The 14-county district stretches west to Panama City, a conservative stronghold along a stretch of oceanfront some call the Redneck Riviera.

The small towns in between should decide the race, experts say. This is where Graham must win back so-called blue dog Democrats - white southern voters who now favor conservatives.

Her father did well with the group, which his supporters dubbed "Graham Crackers," said Lance deHaven-Smith, a political science professor at Florida State University in Tallahassee.

"Gwen Graham is trying to resurrect that coalition among liberal Democrats and conservative blue dog Democrats, but the question is, Can she do it?" he said. "I think it's an uphill battle."

Both national parties already are airing political ads in a district that has been trending Republican in national races, but where voters continue to support some moderate Democrats.

Southerland's campaign is highlighting Graham's ties to President Barack Obama and fellow Democrat Nancy Pelosi, the House minority leader, both of whom are unpopular in the district.

An attack ad launched this month by National Republican Congressional Committee, which reserved $900,000 for the race, took up that theme.

"We recognize Senator Graham’s record, but this race is not about Bob Graham," said Southerland spokesman Matt McCullough. "Steve has got a record of fighting for this district."

Yet Bob Graham, 77, who plans to temporarily relocate to north Florida to support his daughter, is hard to ignore on the campaign trail.

His daughter has revived his trademark workdays, toiling along typical residents at a barbershop, a food truck and a goat farm.

On the campaign trail earlier this month, father and daughter shared a canoe down the Apalachicola River, with Gwen Graham steering in the back.

The next day, the extended Graham family passed out white balloons in the Wausau Possum Festival parade. At the event's colorful auction, Gwen Graham followed a local political tradition of holding up a prized possum on the stage.

During the eight-day "Grilling with the Grahams" campaign tour, her father dished barbecue and mingled with voters in a different towns.

"I happen to have the best role model in my father," Gwen Graham said. "He is really, really proud to see me running."