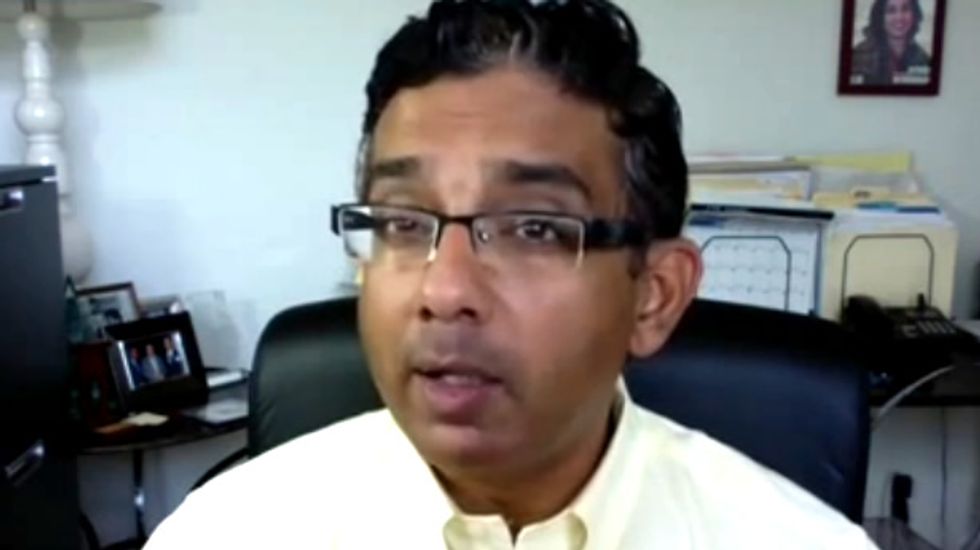 In an interview with USAWatchdog's Greg Hunter, disgraced conservative commentator Dinesh D'Souza claimed that a petty President Barack Obama created the border crisis to "manipulate the goodness of the American people."

In the wide-ranging interview, D'Souza claimed that Obama only went to Chicago in order to work under the tutelage of conservative bogeyman and alleged -- though not actual -- communist Saul Alinksy. "He’s somebody Obama heard about, and that’s why Obama kept going back to Chicago. Think about it -- Obama has no roots in Chicago. He comes from Hawaii. He lived part of his life in Indonesia, but he kept going to Chicago because he heard about this guy, Alinsky," D'Souza said.

"Who was Alinsky?" he asked. "He was basically a shakedown artist. He used to hang out with the mafia, and he realized what the mafia does–they shake people down for money. Alinsky said, how do I do that politically?"

D'Souza then said that this is exactly what the president has done with the situation at the Mexican border -- "taken people of good will and put them into an impossible situation." According to D'Souza, Obama "simply put out the word on the other side of the border that we are not that serious about enforcing the immigration laws. Moreover, we are trying to get amnesty for lawbreakers already in this country. Pretty soon, half the world shows up, and Obama throws up his hands and pretends, 'How did they all come here?'"

He was careful not lay blame for the crisis on the people who attempted to enter the United States. "I don’t blame them," D'Souza said, "I blame the cynicism and manipulation of the Obama Administration which has manufactured, to a large degree, this crisis."

D'Souza then mocked the president for spending too much time obsessing over what critics like himself think about him. "Sometimes people say, 'Obama doesn't have time to worry about what you think.' But actually, he does. He's the kind of guy who hates criticism. He’s been coddled and pampered all his life. He has a press that genuflects before him, and that’s why he feels he can get away with anything -- because so far he has."

Watch the entire interview with D'Souza below.