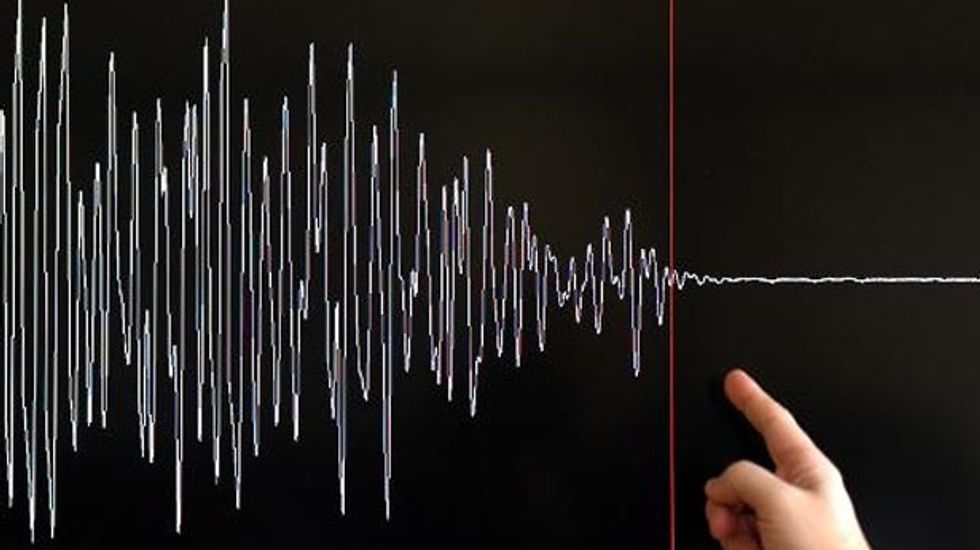 Two people were seriously injured in the earthquake, Barry Martin, community outreach coordinator for the City of Napa, said by telephone. He said he did not have details on the injuries.

There were no reports of any fatalities, Martin said.

Fire fighters were still trying to put out mobile home fires, he said.

Most damage appeared centered around Napa, a famous wine-producing region and a major tourist destination in northern California.

Brick facades gave way in the historic section of downtown Napa, and bricks fell off a second floor corner of the courthouse, which showed cracks. On the main street, masonry collapsed onto a car.

The City's website said there were some 50 gas line breaks, 30 water line breaks and many broken windows and buildings with interior damage.

The quake knocked out power to about 40,000 homes and businesses in Napa and neighboring cities of Sonoma, St. Helena and Santa Rosa, according to the website for Pacific Gas & Electric.

"Everything was just shaking, the hanging lamps waving back and forth," said Omar Lopez, 24, night clerk at a small inn in St. Helena, 15 minutes outside of Napa.

"Guests came into the front desk after the quake and they said the swimming pool looked like a bunch of people had jumped in at the same time."

The U.S. Geological Survey (USGS) said the epicenter of the quake was five miles (eight km) northwest of the town of American Canyon, on the northern edge of the San Francisco Bay.

The quake was the largest to hit the Bay Area since the Loma Prieta quake in 1989, which killed a few dozen people and caused heavy damage to buildings.

"It was long. I think it was the biggest one since I felt since I felt the 1989 quake," said Stephanie Martin, 47, a nursing assistant in Oakland, south of the area where the quake was felt more strongly. "Nothing tipped over, thank God. Rolling back and forth. Just woke us all up."

Aaron Moreno, 18, rushed to Lola's Market, the Mexican grocery store where he works in Napa, right after the earthquake to prevent potential looting and to begin cleaning up the mess. He said there were broken wine bottles and glass everywhere and the store would probably be closed for two days.

"Oh I felt it. When I woke up I was lying on the floor. It kicked me out of bed," said Keith, who lives in Napa and wanted to be identified only by his first name.

The quake was followed by small aftershocks.

"It is the strongest quake in a 60-mile (100-km) radius from the epicenter of this quake in several decades," said Randy Baldwin, a USGS geophysicist, "It was a shallow quake and there are lots of aftershocks."

He said most of the aftershocks were around magnitude 2 range. Aftershocks can continue for the next several weeks and experts will watch their distribution to determine if this quake happened on a fault line, Baldwin said.