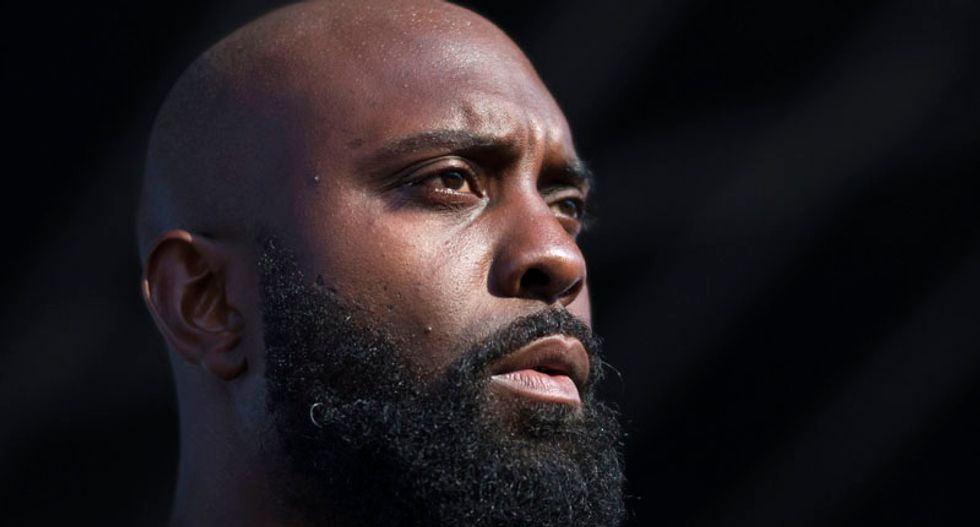 By Nick Carey and Edward McAllister

ST LOUIS (Reuters) - Rev. Al Sharpton and the father of an unarmed black teenager killed by a white officer on Aug. 9 appealed for peace as they led a rally against police violence on Sunday, the day before Michael Brown Jr's funeral in Ferguson, Missouri.

At the rally, which drew hundreds of people to Forest Park in St Louis on a sweltering summer afternoon, Michael Brown Sr was joined by the parents of Trayvon Martin, a Florida teenager shot dead in 2012.

In introducing the slain teen's father, Sharpton appealed for calm after a week of sometimes violent protests over an incident that has called global attention to the issue of race relations in the United States.

"We don't want anything tomorrow that will defile Michael Brown's name," the civil rights leader said.

Brown Sr, who hesitated for a moment before speaking, thanked the community for the support shown to him and Michael Brown's mother, who was not present at the rally.

"All I want tomorrow is peace while we lay our son to rest. Please, that's all I ask," he said.

In Ferguson, police and demonstrators have clashed on and off for more than a week, drawing criticism of the authorities for mass arrests and the use of heavy-handed tactics and military gear.

The National Guard began a gradual withdrawal from Ferguson on Friday, but authorities remain braced for a possible flare-up of civil disturbances surrounding Brown's funeral on Monday.

The shooting of their son by a civilian vigilante reignited the debate about the state of race relations in the United States at a level not seen in recent years, with family and supporters saying it showed the rough treatment that black youths face.

The last four nights have been relatively calm in Ferguson. On Sunday the main street was open to traffic and the police presence was down sharply from just 24 hours earlier.

Kevin Harris, 40, a security guard who lives near Forest Park, was sitting with his 11-year-old son Kameron in the crowd on foldout canvas chairs waiting for the rally to begin.

Harris wore a T-shirt with the silhouette of a man with his hands up and reading "Please Don't Shoot - R.I.P. Michael Brown" and Kameron was wearing a T-shirt saying "Hands Up Don't Shoot." Both were drinking Gatorade to hydrate in the blazing sun.

"We all need to come together to stop the violence. All the violence, including black on black violence. We are our own worst enemy," Harris said.

In Ferguson, there were few protesters out in the boiling heat on Sunday as temperatures soared to above 100 degrees Fahrenheit (38 C).

The National Weather Service issued an “excessive heat warning” for the St Louis area on Sunday, advising that a “dangerous heat wave” would persist through to Tuesday evening. “Those participating in strenuous outdoor activities will be the most susceptible,” the warning read.

Among those who braved the heat were about a dozen African- American women coming from church services and carrying umbrellas to protect them from the sun.

“We just wanted to come here and show our support for the Brown family, even for a little while because of the heat,” said Roberta Jackson, 65, a retiree. “This has all been such a shock to the community and it’s important to show we care even if we can’t stay long.”

Meanwhile, supporters of Darren Wilson, the officer who shot Brown, planned a second day of fundraising for him, with a gathering at a St. Louis sports bar where an entirely white crowd attended an event for him on Saturday.

Speaking on "Face the Nation" on CBS, Democratic Representative Lacy Clay of Missouri, who is due to speak at the funeral, said he had promised Brown's parents he would push for a transparent investigation into his death.

"I'm more concerned that if we do not get to the truth and get to what actually happened and bring justice to this situation, then there’s going to be a problem in the streets," he said.

A grand jury began hearing evidence on Wednesday, a process the county prosecutor said could take until mid-October.

Many protesters said they planned to attend the funeral to show solidarity with the Brown family.

"There are going to be thousands of us out there on Monday," said Rita Bonaparte, 40, a nurse who attended the mostly peaceful protest on Saturday. "We're all going to be there to show our support for the Brown family and their need for justice."