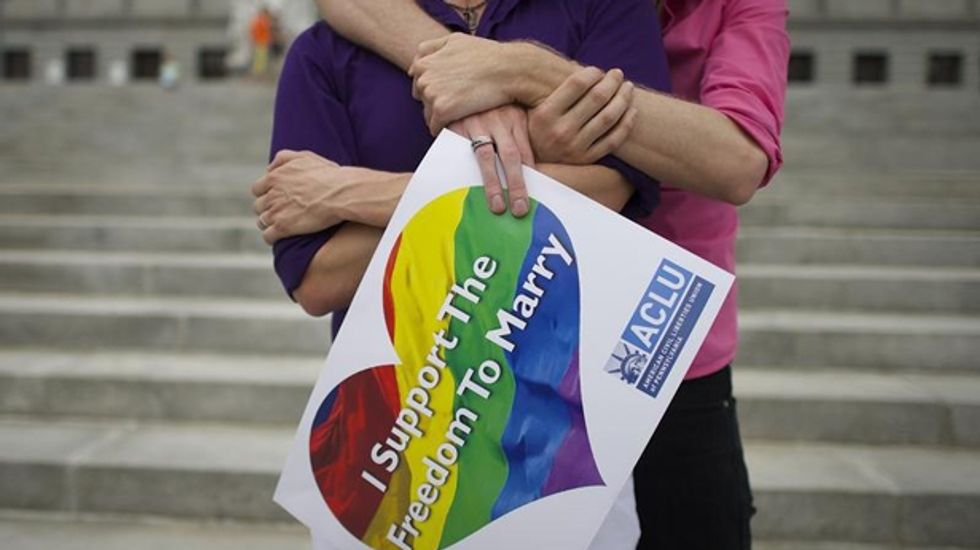 WASHINGTON (Reuters) - The national battle over same-sex marriage will resume on Wednesday when a federal appeals court in Cincinnati convenes a special three-hour hearing to consider cases that have worked their way up from lower courts in four different states.

In all of the six cases to be heard, lower court judges have sided with gay rights advocates either by striking down state bans on gay marriage, or by requiring state governments to recognize gay marriages from states where they are legal.

Federal appeals courts play a crucial role in flagging legal issues for potential U.S. Supreme Court review. So all eyes will be on whether or not the Cincinnati court concurs with other courts that have backed gay marriage in the past year.

"The courts that have ruled so far have created a judicial consensus that is striking and almost unprecedented on a civil rights issue," said James Esseks, a lawyer with the American Civil Liberties Union, which backs gay marriage.

Gay marriage opponents do not dispute that, but point out that the U.S. Supreme Court will ultimately decide the issue.

"Everybody knows that regardless of what a particular court rules, this will eventually end up at the Supreme Court," said Austin Nimocks, an attorney with the Alliance Defending Freedom, a conservative group that objects to same-sex marriage.

Cincinnati's 6th U.S. Circuit Court of Appeals specifically will have to decide whether to uphold same-sex marriage bans in Michigan and Kentucky, both of which were approved by voters in 2004. In four other cases, the court will weigh whether Ohio, Tennessee and Kentucky should be ordered to recognize gay marriages that take place in states where they are legal.

Legal experts expect one or more gay marriage case to be taken up by the Supreme Court in the term that begins this October and runs until June 2015.

The Cincinnati-based court is the third federal appeals court to take up gay marriage since June 2013. That was when the Supreme Court, ruling in United States v. Windsor, struck down the federal Defense of Marriage Act and extended spousal benefits available under federal law to same-sex married couples.

The Windsor decision sparked a new wave of litigation, with more than 20 federal and state courts subsequently ruling against same-sex marriage bans.

The three judges hearing the cases in Cincinnati are Jeffrey Sutton and Deborah Cook, both appointed by Republican President George W. Bush, and Martha Craig Daughtrey, who was appointed by Democratic President Bill Clinton.

Lawyers on both sides will pay close attention to Sutton, who is seen as a star among conservative lawyers and could be the deciding vote.

Currently, 19 states and the District of Columbia allow same-sex marriage.