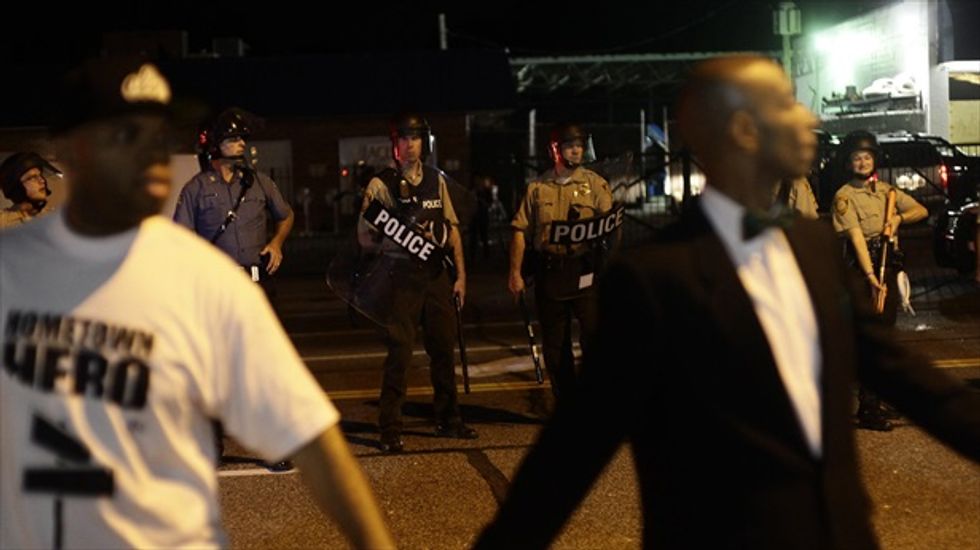 FERGUSON Missouri (Reuters) - In many ways Dwayne James is a beacon of hope in Ferguson, which has been torn apart by racially charged riots. The only black councilman in a predominantly black town, James is widely respected even by political opponents and talked of as a candidate for mayor.

However, he has surprised some by maintaining a public silence for two weeks as Ferguson was rocked by riots over the killing of a black teenager by a white police officer.

"Our city charter provides that our mayor is the spokesperson for the city," James told Reuters, in his first public statement since Ferguson patrol cop Darren Wilson shot Michael Brown, who was unarmed, six times on Aug. 9.

James' reticence contrasts with outside politicians and civil rights leaders who elbowed toward TV cameras. Ferguson's black residents complain that they do not have a voice in the town's power structures, and that lack of representation has contributed to the anger that has sparked rioting, they say.

"He should be out there at ground zero and making his voice much louder," said Jamilah Nasheed, a Democratic black state senator from St. Louis, who launched an online petition calling for the recusal of the prosecutor investigating Brown's killing.

Ann Brown, one of James' neighbors, defended the councilman. He has been a visible and calming force, even visiting to check on her during the demonstrations, said Brown, who is white.

James, who lives in a tidy brick house in a leafy, racially mixed Ferguson neighborhood, said he consulted his pastor before deciding to keep a low profile. Instead of speaking out, he has met with neighbors and youth groups and debated with protesters, he said.

"Some people say they wish they saw me on TV and others say they’re glad I’m doing just what I’m doing," James said on Thursday in a telephone interview.  "At the end of the day, I have to look in the mirror and be OK with the person I see."

Residents acknowledge a root of the problem in Ferguson is a lack of black participation in politics at every level - even at the voting booth.

Blacks did vote during the 2012 election, when 76 percent of registered voters turned out and 85 percent of Ferguson residents supported Barack Obama for reelection. But in municipal elections over the past two years, overall turnout was just 12 percent. It was as low as 1.78 percent in one mostly black Ferguson township, according to St. Louis County election records.

GETTING ON THE BALLOT

James struggles to explain the apathy. "We need to encourage more volunteers at every level, from the neighborhood association to elected office," he said.

Some in the community say blacks may be intimidated by perceptions of a white power structure. The 56-person police force has only three black members, and the fire department is nearly all white. From the mayor down, there are no blacks leading the city or any departments.

White candidates are seen by some residents as benefiting from the organizing ability of institutions like the city's main Catholic church, Blessed Theresa of Calcutta, viewed as an influential social hub that identifies and supports local politicians. Its congregation remains mostly white even as Ferguson's population of 21,000 people has become roughly two-thirds African American.

Pearce Neikirk, an unsuccessful mayoral candidate in 2011, said little has been done to get blacks involved in politics. “I don’t think the black community was ever encouraged to participate,” said Neikirk, who is white.

The barriers are hardly insurmountable, Neikirk noted. He needed just 75 signatures to get on the mayoral ballot.

John Gaskin III, a St. Louis County board member of the National Association for the Advancement of Colored People (NAACP), the U.S. civil rights group, urged Ferguson’s black community to get involved.

"If you're not at the table, you're probably on the menu, Gaskin said."

Councilman James said there are no formal or informal racial barriers to politics. "If you want to run for elected office, you just do it," he said.

A 42-year-old engineer and algebra teacher, James said he first got involved after a neighbor invited him to a community meeting. He soon started a community garden and then served on the city zoning board. After Ferguson’s lone black city council member resigned in 2007 over health issues, another member nominated James.

Constituents in James’ racially mixed district seem satisfied - even the man who contested his reelection last year. “He is a good councilman. It was a very bad idea to run against him,” said Martin Pion, 78, who is white.

Even so, there are questions facing James and other council members about the police department. A civil lawsuit filed this week in U.S. District Court accuses James and the rest of the council of lax police oversight in the 2011 death of Jason Moore, who died after officers used a stun gun on him.

The Aug. 9 shooting death of Brown has made James more aware of the need for greater diversity on the police force. James said he has worked to get more interaction between high school students and Ferguson’s police officers but has struggled to convince black youth to consider police work.

He said talk about bringing blacks more deeply into Ferguson’s civic life is welcome, if overdue.

"There’s always a silver lining if you just tilt your head,” he said. “But I haven’t seen the silver lining yet. But I trust and pray that it will happen. I have faith.”

[Image: Civilian peacekeepers join hands to separate demonstrators protesting against the shooting of Michael Brown away from the police in Ferguson, Missouri on Aug. 19, 2014. By Joshua Lott for Reuters]

Trump is 'nervous' and 'blindsided' about  Cassidy Hutchinson's testimony before Jan 6 committee: report