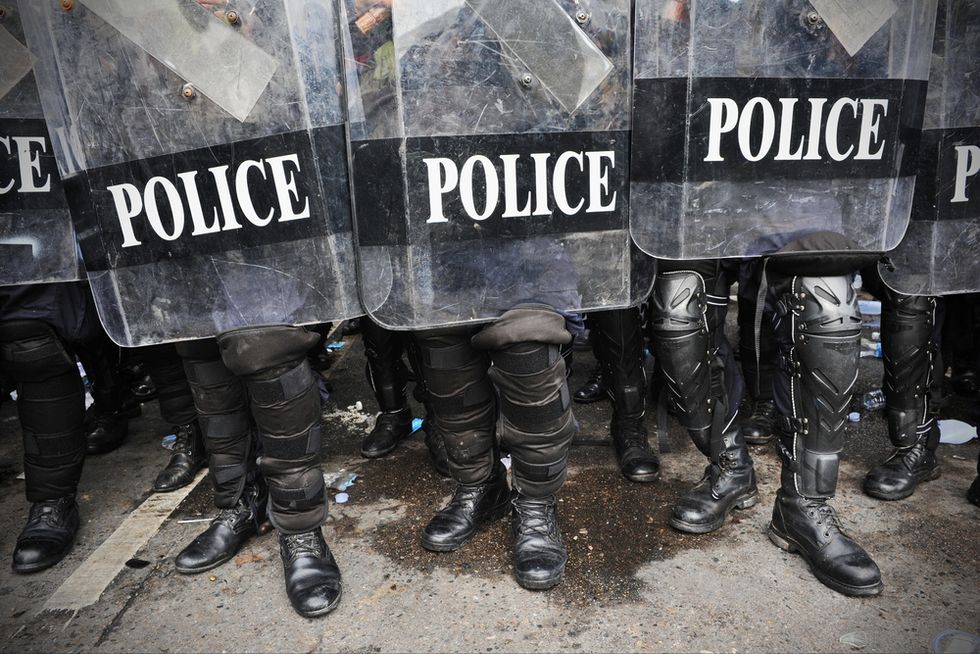 Under a federal program, local police departments like the St. Louis County Police in Ferguson, Missouri are arming themselves with tactical military gear that they obtain for free from the Pentagon.

Talking Points Memo reported on the connection between U.S. police militarization and the federal 1033 program, approved in 1992, which established a materiel pipeline between the military and local police forces. The program was originally a component of the War on Drugs.

In response to what was seen in the 90s as a mushrooming threat of inner city gang violence fueled by the narcotics trade, wrote Newsweek's Taylor Wofford, "the 101st Congress in 1990 enacted the National Defense Authorization Act. Section 1208 of the NDAA allowed the Secretary of Defense to “transfer to Federal and State agencies personal property of the Department of Defense, including small arms and ammunition, that the Secretary determines is— (A) suitable for use by such agencies in counter-drug activities; and (B) excess to the needs of the Department of Defense.” It was called the 1208 Program. In 1996, Congress replaced Section 1208 with Section 1033."

According to a 2014 report by the ACLU known as "War Comes Home," the military has supplied around $4.3 billion in refurbished equipment to U.S. police forces since the project began, with approximately $450 million in equipment and ammunition being distributed in 2013 alone. Newsweek noted that the entire annual budget for the St. Louis County Police Department is less than $200 million.

Police who are suited up for combat, though, often end up treating civilian populations as the enemy, say critics of the practice.

Kara Dansky, senior counsel for the ACLU, told TPM, "It's a culture of militarism. We determined that the police in America have become excessively militarized. It's dangerous because it undermines public trust in law enforcement. It makes it difficult for them to effectively police their communities."

The 1033 program, Dansky said, suffers from a lack of transparency and accountability. Often police officers do not receive the same type of exacting safety training that military personnel who use the same equipment receive.

"The program contains a built-in incentive," she said to TPM's Dylan Scott. "As these local police departments receive this equipment, there are no meaningful constraints on their ability to use it."

Possessed of such vastly superior firepower, she said, police are unlikely to show restraint. "If all you have is a hammer," she said, "everything looks like a nail."

Angry protesters have filled the streets of Ferguson nightly since Saturday. The Associated Press reported that some protesters have resorted to throwing rocks and Molotov cocktails at police and firing weapons.

St. Louis County Police Chief Thomas Jackson ordered all media out of the area and the FAA has created a no-fly zone around the city for media and other aircraft. Officers have arrested and released reporters from the Washington Post and Huffington Post.

On Wednesday night, police fired tear gas and riot-stopping projectiles at media teams that were attempting to document the violence.

"There is never an excuse for violence against police or those who would use this tragedy as a cover for vandalism or looting,' said Obama. He also called for greater police transparency and cooperation.

[image of police in riot gear via Shutterstock.com]