For many Californians, cost of earthquake insurance outweighs the risks 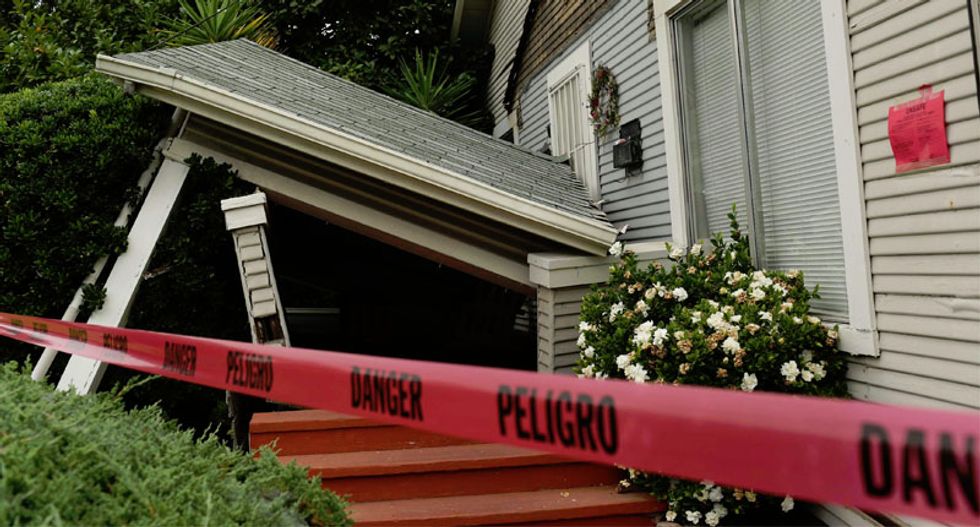 During Sunday's 6.0 magnitude earthquake, some $75,000 worth of bottles of wine, rum and whiskey flew off the shelves of Aiyaz Masani's liquor store in Napa, California. He estimates about half his inventory was damaged, winding up in three-foot piles in the aisles.

But that financial hit is far from enough to convince him to buy earthquake insurance for Redwood Liquor. That would mean forking over about 7 to 8 percent of his insured value of $100,000 in premiums alone, he said.

"It doesn't amount to good financial sense," Masani said on Monday, while standing beside a sidewalk dumpster where workers shoveled broken glass and the stench of fermenting alcohol hung in the air. "It's useless to buy insurance."

In one of the most quake-prone areas of the world, the cost of earthquake insurance remains too high for many California residents. Flood coverage is often more affordable and mandatory in areas of the country where hurricanes are frequent, but only 6 percent of Napa's residents carried coverage before Sunday's quake, the biggest to hit the Bay Area in 25 years and the first major quake in the state in two decades.

When The Big One hits, taxpayers may end up paying for much of the damage.

A repeat of the 1906 San Francisco earthquake, estimated at 7.8 magnitude, would cause some $93 billion in insured losses, according to an estimate by the Insurance Information Institute, an industry research group. Total economic losses would be three to four times that.

As the clamor for disaster relief rose, federal and state governments would be under "enormous pressure", said Bob Hartwig, president and economist of the Institute. "And that would be an understatement," he added.

Catastrophe risk analysts say there are a few reasons for the high cost of quake insurance, notably the nature of earthquakes themselves. The federal government also backs the market for flood insurance but has avoided quake policies.

And mortgages from federally regulated or insured lenders, which require flood insurance for properties at high risk of inundation, do not require quake policies in active fault zones.

Compared to hurricanes, floods and tornadoes, earthquakes are rare, and they inflict much more damage.

Since the 1950s, there have been 11 earthquakes in the United States larger or equal to the 1994 Northridge quake near Los Angeles, a 6.7 magnitude which was the costliest on record. There have been about 59 major F5 tornadoes and 29 major landfall hurricanes recognized by the National Hurricane Center.

The risk models used by insurance companies to calculate earthquake rates are, at best, incomplete, say some analysts.

"They're usually way off in estimating earthquake losses," said Karen Clark, CEO of catastrophe risk modeling firm Karen Clark & Co. "The lack of data leads to high uncertainty and just in general the higher your uncertainty, the higher the price will be." If more people bought earthquake insurance, prices likely would go down, she added.

She expects only 10 percent of a major San Francisco quake's damage would be covered by insurance.

"It's a complicated risk, said Glenn Pomeroy, CEO of California Earthquake Authority, which has over $10.4 billion in claims paying capacity to cover its 856,000 policyholders. "That's why most insurance companies don't want to tackle it."

Twenty years ago, about a third of California residents were covered, paying an average premium of $200 a year, according to Patricia Grossi, earthquake expert and senior director at catastrophe risk modeling firm RMS.

The 1994 earthquake in Northridge caused about $24 billion in insured losses in 2013 dollars, according to the Insurance Information Institute.

Since Northridge, the take-up rate has fallen to about 11 percent with annual premiums averaging $1,000, Grossi said.

By contrast, the average flood insurance premium in the United States is $650, often with a $500-$1,000 deductible, according to the National Flood Insurance Program, which has federal backing.