Fox News guest: Was Michael Brown too large to be an 'unarmed teen'? 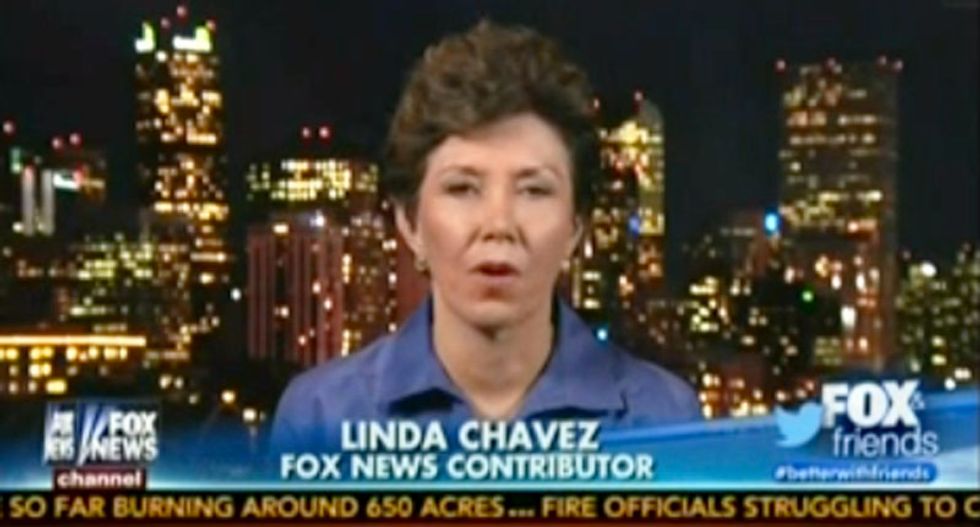 Appearing on Fox & Friends, a former nominee for Labor Secretary took the media to task for inflaming racial tensions by describing slain teen Michael Brown as "unarmed" when he was, in fact, "six foot four and weighed almost three hundred pounds."

Linda Chavez, who was nominated to head up the U.S. Department of Labor by President George W. Bush but withdrew when it was discovered she employed an undocumented immigrant as a maid, wrote a column last week for the New York Post stating, "Publicly available videos and still photos of Brown and Wilson show significant size differences between the two men, with Brown looking to have a height advantage over Wilson and outweighing the officer by about 100 pounds."

Chavez also repeated the now-discredited report that Brown punched officer Darren Wilson in the eye and "was treated at a hospital for facial wounds, perhaps even a fracture to his eye socket."

Speaking with host Steve Doocy, Chavez avoided addressing the errors in her column, instead blaming Attorney General Eric Holder and saying "the media has not acted responsibly."

"I think the media has not acted responsibly," she explained. "I think that what is happening is really not calming racial fears but is actually enhancing them by acting as if, you know, this mantra of the unarmed black teenager shot by a white cop. You know, that description in and of itself actually colors the way in which we look at this story. We're talking about an 18-year-old man who is six foot four and weighs almost three hundred pounds, who is videotaped just moments before the confrontation with a police officer strong arming an employee and robbing a convenience store."

Chavez added, "The way in which this story is presented does, in fact, I think, color the outcomes, and I think it is outrageous when the top law enforcement officer is helping do this."

Watch the video below captured by Media Matters for America: