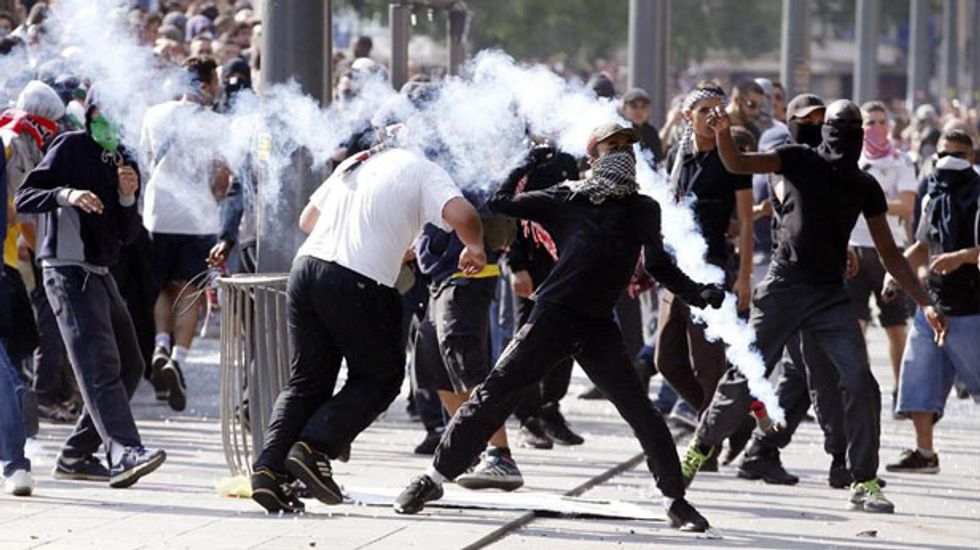 France is considering disbanding a radical Jewish group whose members clashed with pro-Palestinian activists during rallies over Israel's offensive in Gaza, a source close to the case told AFP on Thursday.

News of the mooted ban on the Jewish Defence League (LDJ) came just ahead of an evening pro-Israel demonstration outside the Jewish state's embassy, located near the French prime minister's office.

Police said around 4,500 people joined the rally called by the Representative Council of Jewish Institutions in France (CRIF). Another 1,000 gathered at the Great Synagogue in Lyon.

They were held in response to weeks of pro-Palestinian protests that have been marred by clashes, arrests and allegations of anti-Semitism in which synagogues were targeted and Israeli flags burnt.

The presence of charged-up JDL activists on the sidelines of recent rallies has been seen as one of the reasons they turned violent, with clashes outside a synagogue on July 13 leading to a ban on subsequent pro-Palestinian protests.

A source close to the case confirmed to AFP a report by French newspaper Liberation that steps were being taken to disband the LDJ, saying: "We are carrying out an extremely fine analysis of the law."

Interior Minister Bernard Cazeneuve did not specifically refer to the LDJ but said on Thursday that "any group that can pose a problem" or did not abide by the law would be banned.

The CRIF's head Roger Cukierman distanced his group from the LDJ as news of the possible ban emerged, saying: "We share neither their ideology nor their methods."

"It's a tiny organisation comprising a few dozen members from what I know," he said, but expressed surprise that the government was not planning to ban "pro-Palestinian groups which have tried to vandalise eight synagogues in the Paris region."

The main Jewish students' union echoed that view. Its head Sacha Reingewirtz said: "I condemn all forms of extremism... but if the government disbands it (the LDJ), it should also ban all the radical groups behind recent anti-Semitic violence."

Police kept a firm grip on Thursday's pro-Israel demonstrations in Paris and Lyon.

"There have unfortunately been many protests where we have heard hatred of Israel and Jews," said Joel Mergui, president of the Israelite Central Consistory of France.

"Tonight, with this gathering, there is no hatred of Palestinian people. There is hatred of a terrorist movement whose objective is the 'Final Solution' for the Jewish people."

Last week, Interior Minister Cazeneuve said the French LDJ's actions were "excessive" and "should be condemned".

The French LDJ denies breaking laws, but it takes inspiration from the far-right Jewish Defense League, labelled a terrorist organisation by the United States' FBI in 2001.

It also uses the emblem of a banned Israeli far-right party, the Kach, a raised fist inside a black Star of David, set against a yellow background.

The Gaza conflict has stirred up huge passions in France -- home to the largest Muslim and Jewish communities in western Europe with around five million Muslims and half a million Jews.

While many protests around the country have gone smoothly, some demonstrations in Paris and the northern suburb town of Sarcelles have descended into chaos and looting in which Jewish businesses were targeted.

French far-left and Muslim leaders have been calling for action against the LDJ, with the French Muslim council branding it "an extremist, racist and violent association."

The government has come under attack for banning some demonstrations, while far-right leader Marine Le Pen has blasted the ruling Socialists for failing to stem "riots in the heart of Paris".

"We must protect the right to demonstrate but from the moment that the state takes a decision to ban a rally they must provide the powers so that the ban is respected," the National Front leader said.

"We ask policemen to confine troublemakers within a specific perimeter but... neither to arrest them nor to burn or break everything," she said on Thursday.

Scores of people have been arrested following the riots and unrest that marked most of the Gaza demonstrations in and around Paris.