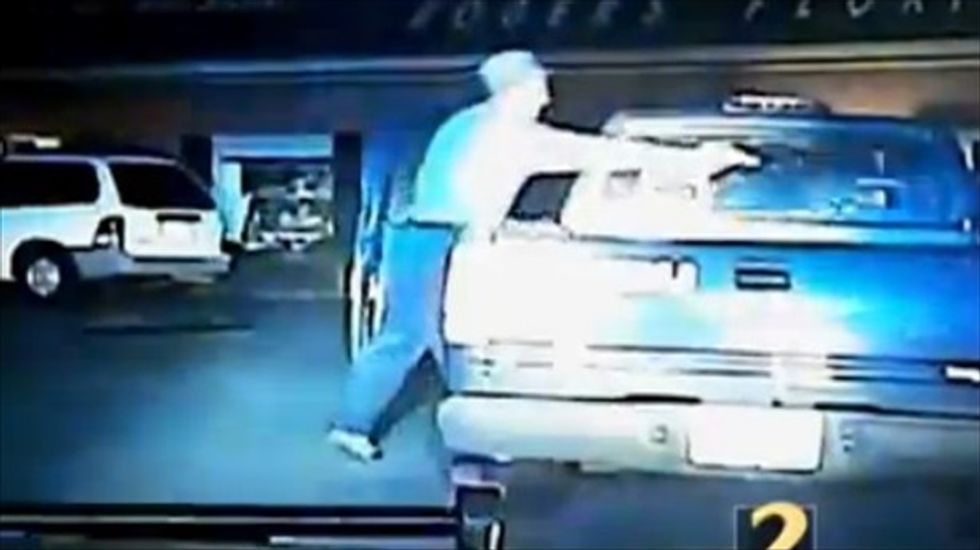 Police in Alpharetta, Georgia released frightening dashcam footage of an officer being shot seven times during a near-fatal traffic stop in April 2013 that, surprisingly, sidelined him for less than a year, and surviving during an April 2013 traffic stop, WSB-TV reported on Thursday.

The video from Officer David Freeman's vehicle shows the suspect, exiting his car after being pulled over for an expired tag and shooting at him with a handgun. Hicks reportedly acted like he was cooperating before getting out and shooting at the officer. He then drove away from the scene. The footage shows Freeman leaning on his patrol car as he describes Hicks' vehicle to the dispatcher.

After shooting Freeman, authorities pursued Hicks through Alpharetta and two other communities before he crashed his vehicle on an interstate. Hicks was then shot and killed by officers after reportedly firing at them after leaving his car again. A search of his apartment revealed he had been collecting guns and ammunition.

WXIA-TV reported that, while police have not determined what caused Hicks to begin gathering the weaponry, he had been out of work for 18 months and lost water service to his home. Police spokesperson George Gordon said Hicks' family suspected he was on his way to kill one of them when he was stopped.

"He was just bent on causing carnage that night, for whatever reason," Gordon was quoted as saying.

Freeman required two surgeries and extensive rehabilitation before being cleared to return to duty. Earlier this year, Freeman described the incident in a video released by a local church.

"I thought I was shot twice," he was quoted as saying. "When they got me in the ambulance and cut the uniform off, they found more and more and more."

Freeman's wife, Kristie Freeman, told the church that the officer called her shortly after the shooting.

"He said, 'Hey beautiful. I just need you to know I've been shot. I think I'm OK. I need you to get my parents over to the house and get to the hospital as soon as you can,'" she recalled.

Watch a report on Freeman's near-fatal run-in with Hicks, as aired on WSB, below.