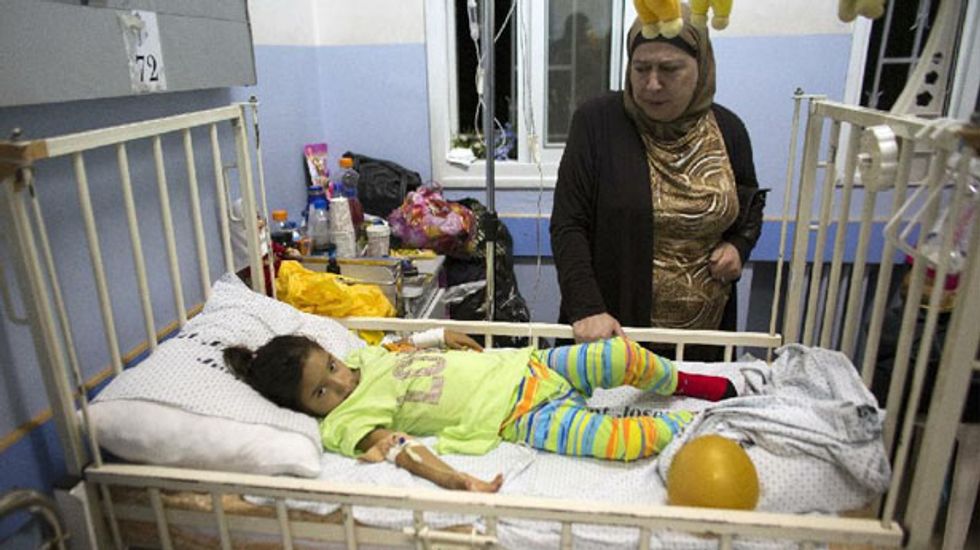 Doctors and aid agencies are trying to capitalise on a truce in Gaza to evacuate more wounded Palestinians for life-saving medical treatment in east Jerusalem, Israel and Jordan.

More than 9,500 Palestinians were wounded during four weeks of fighting between Israel and Hamas, according to Gaza health officials.

Ninety of some of the most serious cases have been evacuated through the Erez border crossing since the conflict began, according to Guy Inbar, spokesman for COGAT which is part of the Israeli defence ministry.

He said the wounded had been sent to Israel and Jordan from an Israeli field hospital at Erez.

Medics and the Red Crescent told AFP that two patients were sent to the Arab Israeli town of Nazareth and dozens of others to three hospitals in east Jerusalem.

Four-year-old Shayma al-Masri has been a patient at St Joseph's in east Jerusalem for two weeks.

She is still exhausted and still in pain.

Her spleen, kidneys, stomach and intestines have all been damaged by shrapnel that pierced her small chest and tore through her body, before exiting from her side.

- When the clouds clear -

Her only companion from Gaza is her aunt. But she knows where her dead family are.

"My mother, brother and sister went up to the sun, they will return to me when the clouds clear," she says.

Bound to her bed by a network of tubes nourishing and sustaining her, she was seriously wounded in an Israeli missile attack on Beit Hanun, north of Gaza City.

The family were hit as they fled in terror from an attack on their neighbourhood during which their home was bombed. Her mother Sahar, 17-year-old sister Asil and brother Mohammed, 15, were killed instantly.

Her father is being treated separately at hospital in Gaza.

She cries out, calling for him.

"We were bombarded from the air, sea and land," says her aunt Samah. "Everything turned into destruction. We ran away to the school, they bombed the school."

Shayma's room is full of Palestinians from east Jerusalem who have come to show their solidarity with Gaza by visiting the wounded.

During the feast of Eid al-Fitr which ended the Muslim fasting month of Ramadan, they bought food, sweets and new clothes, as well as dolls and games for the children.

"We are trying to use the 72-hour ceasefire to get more cases from Gaza to ease the pressure there," says Dr Maher Deeb, head of St Joesph's hospital.

His hospital is treating 25 Gazans evacuated by aid agencies in coordination with Israel, which has also set up a medical unit at Erez.

"We're working round the clock. Fifty percent of the cases are critical. Even the stable cases are complicated and need long-term treatment," Deeb tells AFP.

Most of those sent to his hospital have multiple injuries from missile and rocket attacks, he says.

Deeb's hospital also received wounded Palestinians during Israel's previous operations in Gaza in 2008 and 2012, but this time there have been more patients.

"We had these cases before but we have a larger quantity and of a more complicated nature than before."

At Maqased hospital on the Mount of Olives in east Jerusalem, telecoms worker Khamis Zaki Abu Hasira is one of the patients being treated.

The father of four was wounded by shrapnel in Sheikh Ijleen in western Gaza City.

He told AFP how along with two other colleagues he was setting up a position for telecoms company Jawwal, when they heard an explosion at a friend's house nearby.

Rushing there to see the damage, they stepped out of their company car when Abu Hasira heard the blood-curdling screech of a rocket.

"We were sure we were about to be killed, and said our prayers," he recalls, just before a rocket hit them, cutting off his right leg and breaking his arm, as well as causing problems in his stomach.

In Gaza, doctors amputated his leg twice -- first below the knee and then above it.

When he arrived in Jerusalem, doctors removed it entirely.

His skin has yellow-green markings from the shrapnel, and he moans, unable to find relief from the pain plaguing his shattered body.

A four-year-old Palestinian boy and his father enter Abu Hasira's room. The father lifts his son, they lean over the bed, and the child kisses Abu Hasira.