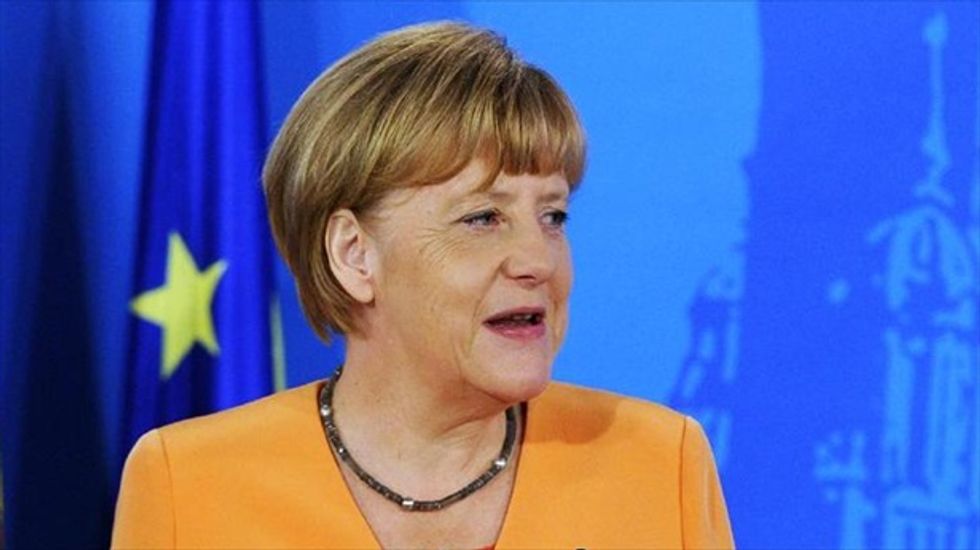 Spanish Prime Minister Mariano Rajoy has pledged to go to the Constitutional Court to block any Catalan attempt to hold the poll, arguing that sovereignty is a matter for all of Spain to decide.

He reiterated his stance at a joint news conference with Merkel in his northwestern home city of Santiago de Compostela, saying Catalan moves to split from Spain were "nonsense".

"We just spoke here of banking union, of fiscal union, of creating a single European market. That is the path the world is on towards greater union and integration."

Asked for her view on the referendum, Merkel said it was a matter of "internal politics", before backing Rajoy's view, according to a Spanish translation of her remarks.

"I can say that everything he has said in the past and which he repeats now seems very logical to me and is something that should be backed," she said.

The Catalan government has already set a date of November 9 for a referendum -- two months after an independence vote in Scotland.

With an economy roughly the size of Portugal's, Catalonia -- a region of 7.5 million or 16 percent of the Spanish population -- has long been an economic powerhouse in a country where just under a quarter of people are unemployed.

Proud of their distinct language and culture, a growing number of Catalans resent the redistribution of their taxes to other parts of Spain and believe the region would be better off on its own.

Catalans are planning to join hands to form a 400-kilometre (250-mile) human chain to press their cause on September 11, Catalonia's national day, after a similar demonstration last year.

Support for independence was about 45 percent in April, according to the regional government's most recent poll.

Backing for independence is lower when Catalans are asked if they would still favour breaking away from the rest of Spain if this meant the region would have to leave the European Union.

Both the European Union and NATO have warned that Catalonia would be excluded if it broke away from Spain.