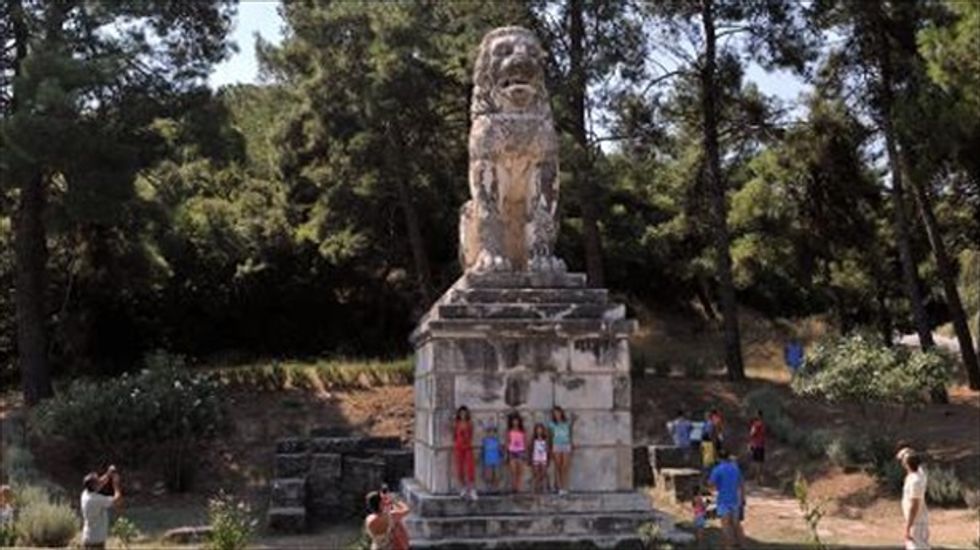 AMPHIPOLIS (Greece) (AFP) - To the villagers near the ancient Greek town of Amphipolis, archaeological treasure is nothing new -- many in this area have lived off antiquity smuggling for decades.

But a massive tomb unearthed near the town dating back to the era of Alexander the Great has locals and visitors abuzz like never before.

"The mystery hiding behind this discovery has excited our imagination," says Katerina Arabatzi, who drove from the nearby city of Veria to see the tomb.

"In recent days, we have started to remember the tale of Alexander the Great once more," she said.

The Hellenistic-era tomb lies within a mound 500 meters (1,630 feet) long and three metres high -- the largest of its kind ever discovered in Greece.

"We knew something lay here," said visitor Eleni Avramidou, whose family hails from the area.

"All of northern Greece constitutes an archaeological treasure trove."

The tomb's outlines were originally discovered in 2012, some four decades after archaic graves were found atop the hill.

This week, archaeologists used a crane to gently remove limestone blocks barring access to the inner tomb, where a diamond-pattern floor mosaic has already been detected.

However, it is unclear whether the tomb's contents will be found undisturbed, as its presence was known in Roman times.

The excavation site has been sealed off under police guard ahead of a visit by Prime Minister Antonis Samaras, who described the find as "unique".

"It is certain that we stand before an exceptionally important find," Samaras said. "This is a monument with unique characteristics."

Officials have stressed that the tomb is unlikely to contain the body of Alexander, who died in Babylon in 323 BC and was likely buried in Alexandria, Egypt.

According to archaeology professor Michalis Tiverios, a more likely occupant is Nearchus, one of Alexander's admirals, who lived in Amphipolis.

"The monument is most likely associated with battles from the era," Tiverios told AFP, noting the presence of the lion's statue atop the tomb.

"It could also contain several Macedonian warriors, or it could be a cenotaph," he said.

Experts are also not ruling out that it could belong to another member of the Macedonian royal family.

Alexander's Bactrian wife Roxanne and son Alexander were exiled to Amphipolis and murdered there on the orders of his successor king Cassander around 310 BC.

The archaeological team conducting the excavation has declined to speculate on who or what lies inside, beyond noting that the monument dates from the period after Alexander's death.

"The senior archaeologist comes to our local coffee shop, but all she tells us is 'be patient'," said community leader Athanassios Zournatzis.

The heavy police presence around the site is not just to keep the crowds away.

In the nearby villages of Amphipolis and Mesolakia, home to around 600 people, most residents have a tale to tell about grave robbers.

"Many nights we would see people with lanterns on that hill, searching," said a 50-year-old local who declined to give his name.

"A few years ago, they even used a bulldozer to get into an ancient grave."

Police consider the area a high-risk zone for antiquity smuggling, and have made dozens of arrests in recent years.

The most prominent case involved an elaborate gold funerary wreath, allegedly found by a local farmer in the early 1990s and eventually sold to the J. Paul Getty Museum in Los Angeles for $1.15 million (860,000 euros).

The wreath was returned to Greece in 2007 after more than a decade of wrangling.

One of antiquity's greatest warriors, Alexander of Macedon conquered the Persian empire and much of the known world before his death at the age of 32.

The Hellenistic era was a golden period of Greek civilisation ahead of the rise of Rome, with successor-states to the empire of Alexander ruling kingdoms in modern-day Egypt, Turkey, the Middle East, Afghanistan and India.