Gun sales are up, as Ferguson residents try to get on with life after days of protest 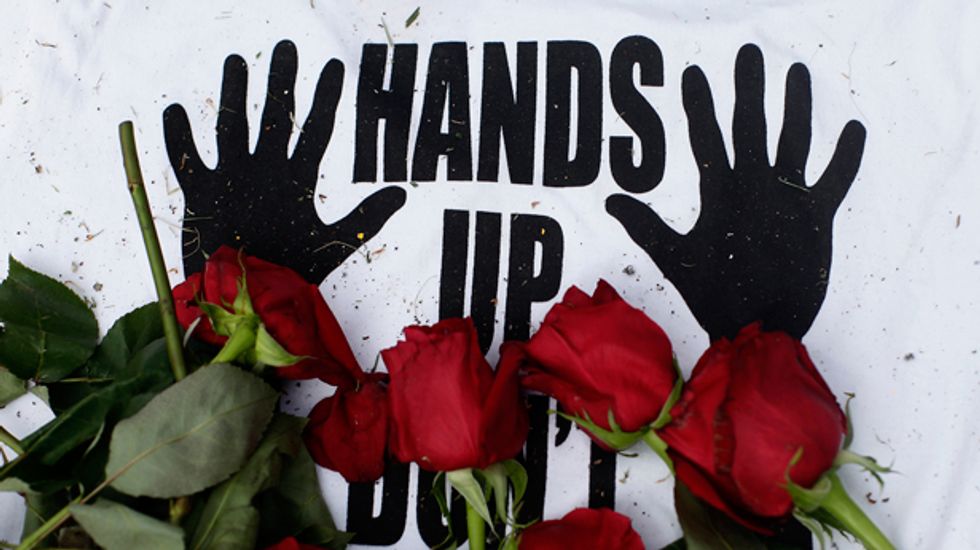 Roses rest on a t-shirt at a makeshift memorial for Michael Brown in Ferguson, Missouri August 19, 2014. REUTERS/Joshua Lott

Banners flutter along the main street of downtown Ferguson but instead of the protest signs that read "Hands Up Don't' Shoot," these are ads for everyday events like a local farmers market and a church fish fry.

With nightly protests and police lobbing tear gas along West Florissant Avenue, locals in the small Missouri town of just 6 square miles (16 square km) are trying to get on with their normal lives.

It's not easy. Traffic is disrupted by police street blockades, stores close early if they open at all and the start of the school year has been delayed by the protests and violence that has ensued since the shooting death by a white police officer of an unarmed black teenager on Aug. 9.

"We all want justice, but I think a lot of people now feel beyond justice. They want the whole thing to go away," said Mike Blair, a 62-year-old retiree who lives in Jennings, the next town over. "Things are so disruptive."

"I'm wishing it would all go away, but then I have to catch myself because a young man is dead and another man is being held up to all kinds of scrutiny."

In the warren of residential streets lined with small single-story brick houses nearest to West Florissant, residents said they are growing exasperated by the violence and its fallout.

They recount going through security checkpoints to get to their homes and facing long delays getting into the neighborhood once the now-daily demonstrations begin.

"It's a hassle. You have to have your ID, you have to come in the back way. It's just sad that it's come to this," said Carter Sigh, 71. "They are trying to rush to justice. You have to give the police time to do their job right."

Waiting to get her car repaired in downtown Ferguson, 81-year-old Helen Robinson fretted that she couldn't make her regular drive down West Florissant, a major thoroughfare.

But she said: "I'm glad for the opportunity to protest because to me, it was a tragedy."

Forced to miss work to care for her two school-age children, nurse Afrika Bryant, 33, said she had trouble getting through police lines to get to her home.

"We were going to get hotel rooms but now we're scared that they might start looting houses," she said.

Antonio Henley, a 43-year-old barbershop owner, fretted about the hit his West Florissant business is taking. "It's terrible," he said. "The police are keeping everybody away. We're taxpayers, but how can we pay our workers and pay taxes if we can't do any business?"

But gun shop owner Steven King had quite the opposite to report. "Our sales are just through the roof," King said.

Sales at his Metro Shooting Supplies are up tenfold and he's sold out of pump shotguns, he said.

"People are afraid," he said, "and it's just not stopping."

Some locals insist the protests, accompanied by the violence, a huge media throng and the heavy police and military presence, are having no impact. But their actions belied their words.

The proprietor of a local auto repair shop said he hadn't been affected but admitted to boarding up his shop windows and blocking the doors with pieces of heavy machinery at night.

A group of businessmen eating lunch at a small cafe also said nothing was different, but they could barely tear their eyes away from the coverage of Ferguson on a nearby television screen.

In front of the Ferguson Public Library, where flower beds of black-eyed Susans blew in the hot breeze, Betsy Anderson waved a sign "Students Welcome Here" at passing motorists.

Teachers were holding impromptu classes and other educational activities at the library while the schools are closed, said Anderson, 65, who retired after teaching in Ferguson schools for 27 years.

"I'm a kid of the 60s," she said. "There are positive ways to get through injustice and struggle. We've got to take this opportunity as a teaching moment. We need to educate people."