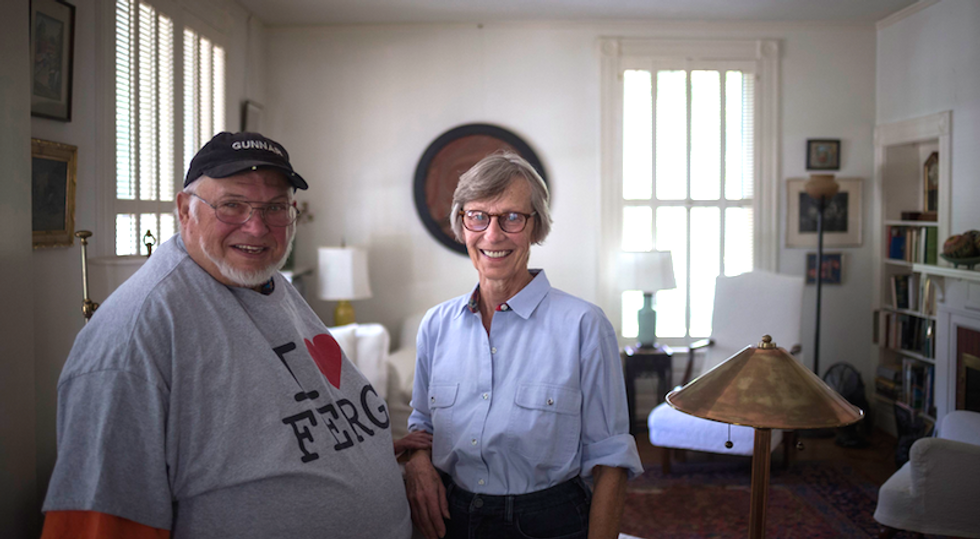 Images of rioting and demonstrations after the police shooting of an unarmed black teenager in Ferguson, Missouri, have provoked outrage across the world.

Yet just a 10-minute drive from where Michael Brown was killed on Aug. 9, signs of the unrest that has beset the poorer neighborhoods of this St. Louis suburb are strikingly absent.

The sometimes violent protests have had little visible impact on the quiet tree-lined streets of Ferguson's historic district, where some of the city's grandest houses are located and many of its white residents live.

It is in stark contrast to the daily disruptions to everyday life felt in poorer, mostly black areas just a few blocks away.

"We have seen no difference. We are far away enough from the isolated parts of Ferguson and are virtually unaffected," said Ruth Brown (pictured, with her husband, Gunnar Brown), a 72-year-old white woman, sitting on a white couch in the spacious living room of her 130-year-old home.

Even so, "we are heartbroken, because we fear that the town will not recover this time," said Brown, whose grandparents came to Ferguson in 1885.

Michael Brown's death and the sometimes violent protests that followed have exposed racial tensions in the city and across the United States, and have prompted international condemnation of the clashes between police and demonstrators. About 67 percent of Ferguson's residents are black, according the latest U.S. Census data.

While the protests have remained calm in the brutal August heat of recent days, Michael Brown's funeral on Monday is expected to draw huge crowds, leaving many concerned about further violence. Hundreds of people gathered in a St Louis park on Sunday afternoon at a rally where the father of Michael Brown was joined by the parents of Trayvon Martin, a Florida teen shot two years ago in another racially tinged case.

But in historic Ferguson, the streets were deserted, showing the divided fortunes of the town of 21,000.

Huge elm and oak trees tower above the free-standing houses. Sprinklers keep the broad front lawns lush and green. Apart from the signs that read "I love Ferguson" that have cropped up outside houses across the city since the demonstrations began, there is no sign of the disruptions occurring across town.

On Saturday a farmers' market attracted locals seeking fresh produce, and at night locals sat at the bar at the Brewhouse where craft beers were sold. Vitriol towards the police was muted and no one interviewed had been to the protests.

"I hope that the law enforcement department reviews what they are doing now, but it is not black versus white or us versus the police," said Sheryl Gibbs, standing on the porch of her brick house with green wooden shutters and large back yard.

"The City of Ferguson has made a lot of progress. I don't see a racial divide," said the 48-year-old white woman, who owns a small business in the Dogtown area of St Louis.

While some expressed concern about the impact of the protests on business and investment, others remained positive.

The shooting of Michael Brown could help generate awareness of the town's problems, said Carol Stevenson, 76, who has lived in her bungalow in Ferguson for 50 years.

"I remember when the schools were segregated," she said, pointing to an elementary school across her street. "This is a good thing -- let's get these problems sorted out.