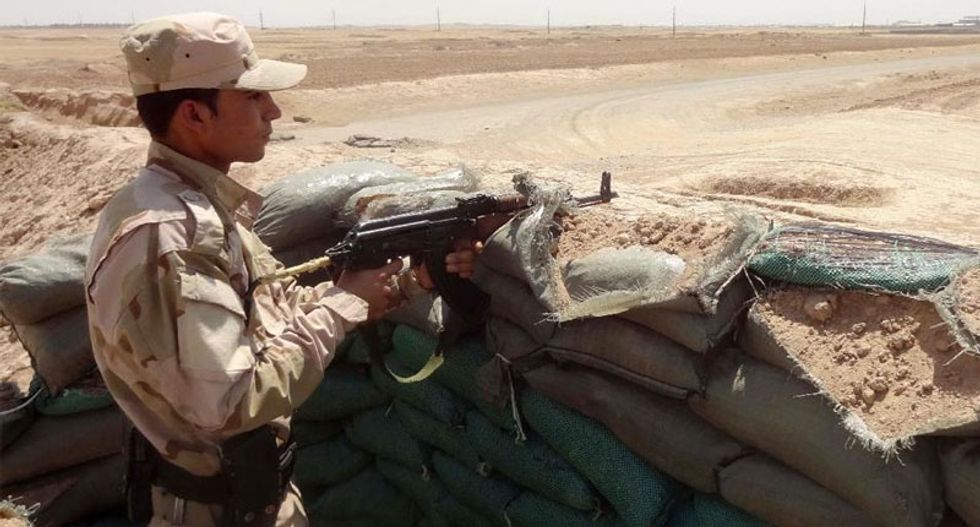 Iraq called for global support for its fight against jihadists, as Shiite neighbour Iran said it was helping Baghdad resist the militants but not with soldiers on the ground.

Iraq is struggling to regain significant parts of the country after a lightning militant offensive led by the Islamic State (IS) jihadist group seized second city Mosul in June and swept through the country's Sunni heartland, as security forces fled.

The jihadist fighters have been bombarded since August 8 by US air strikes in northern Iraq, allowing Kurdish peshmerga security forces to claw back a limited amount of lost territory, including the Qaraj area, which they retook on Sunday.

"We launched an attack this morning on positions of (IS) gunmen" in the Qaraj area southeast of Mosul, forcing the militants out after two hours of fighting, peshmerga Staff Colonel Salim al-Sorchi said.

Iraq "needs help and support from everybody... all the forces against terrorism," but not in the form of troops, as "there is no shortage of fighting men", Zebari said at a joint press conference with his Iranian counterpart Mohammed Javad Zarif in Baghdad.

Zarif, on a two-day visit to Baghdad, for his part said Iran is working with Iraq, and also called for a broad effort against IS.

"We are cooperating and working... with the Iraqi government and with the Kurdish government in order to repel this very serious, atrocious group," Zarif said.

It is "committing acts of horrendous genocide and crimes against humanity" and "needs to be tackled by the international community and by every country in the region", he added.

"But we do not believe that they need the presence of Iranian soldiers in order to do this task."

There have been reports of Iranian forces fighting in Iraq, and despite Zarif's denial, there is evidence of military involvement by Tehran, including an Iranian pilot that state media said was killed fighting in Iraq, as well as the presence of several Iranian Su-25 warplanes in the country.

The United States, which has launched more than 90 air strikes against IS jihadists in Iraq in the past two weeks, has said operations against the group in Syria may also be necessary.

"They agreed on the importance of continuing the historic cooperation underway between the Kurdish Peshmerga and the Iraqi security forces, which -- with support from the United States and other partners -- helped retake the strategic Mosul Dam," the White House said.

IS jihadists on Sunday won a bloody battle for Syria's Tabqa military airport, last stronghold of the Damascus regime in the northern province of Raqa, a monitoring group and state media said.

The Syrian Observatory for Human Rights said 346 jihadists and 25 Syrian troops had been killed in the fighting at the airport since last Tuesday, with another 170 soldiers dying during fierce clashes on Sunday.

The jihadists have declared a "caliphate" -- a successor state to historic Muslim empires -- straddling territory it has seized in Iran and Syria.

Washington has ramped up its rhetoric following the grisly IS beheading of American journalist James Foley who was abducted in Syria, calling it "a terrorist attack against our country".

In a video released online, a masked black-clad militant said Foley was killed in revenge for US air strikes against IS.

On Sunday, officials announced that an American who has been held hostage for two years by an Islamic rebel group in Syria was released to UN peacekeepers in the Golan Heights.

"Finally he is returning home," US Secretary of State John Kerry said, confirming the release of Peter Theo Curtis, a freelance journalist whose disappearance in Syria had not been previously reported.

Kerry said Curtis had been held by the Al-Nusra Front, another Islamic rebel group operating in Syria.

The IS onslaught has exacerbated already high sectarian tensions in Iraq.

On Friday, suspected Shiite militiamen launched an attack on a Sunni mosque in Diyala province, killing 70 people as they sprayed worshippers with machinegun fire, according to officers and a witness, although some sources blamed IS for the killings.

Dubbed by a "massacre" by rights group Amnesty International, the attack threatens to increase anger among the Sunni Muslim minority with the Shiite-led government at a time when the anti-militant drive depends on their cooperation.

Prime minister-designate Haidar al-Abadi, a Shiite, urged "citizens to close ranks to deny the opportunity to the enemies of Iraq who are trying to provoke strife".

Iraq was hit by further violence on Sunday, with bombings in two areas of Diyala province, northeast of Baghdad, killing 10 people, among them five Kurdish security forces members.