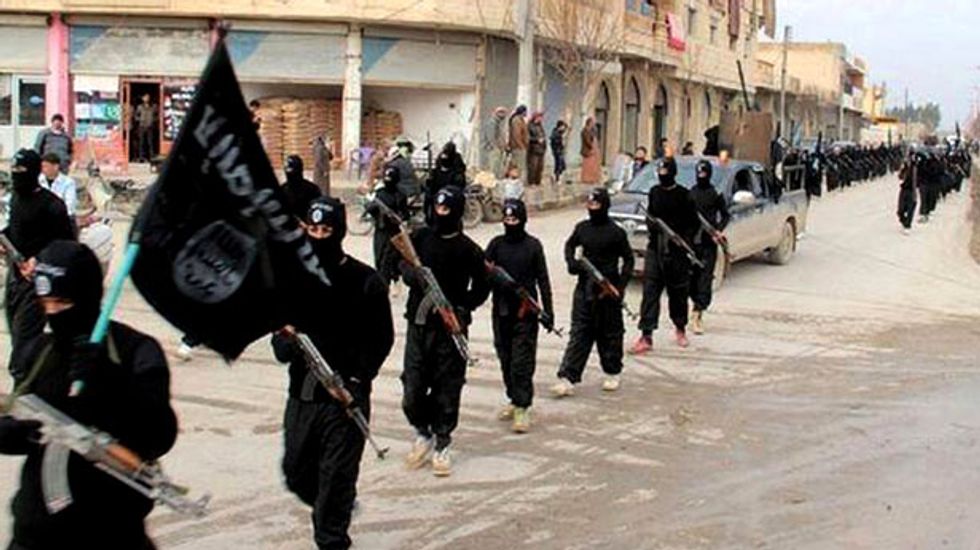 Islamic State fighters sweeping across Syria and Iraq are a direct threat to Britain and the country must use all tools available to halt their advance, Prime Minister David Cameron said.

Cameron said that while it would not be right to send an army into Iraq, some degree of military involvement was justified due to the threat that an expanding "terrorist state" would pose to Europe and its allies.

"If we do not act to stem the onslaught of this exceptionally dangerous terrorist movement, it will only grow stronger until it can target us on the streets of Britain," Cameron wrote in The Sunday Telegraph.

"I agree that we should avoid sending armies to fight or occupy, but we need to recognise that the brighter future we long for requires a long-term plan."

Cameron argued that security could only be achieved "if we use all our resources, aid, diplomacy, our military prowess" and said he planned to send a British representative to the Kurdish region.

He did not spell out how Britain's military could be used, but said he was considering sending body armour and counter-explosive equipment to arm Kurdish forces against the jihadists.

So far, Britain has sent a spy plane to monitor for attacks on minorities in northern Iraq and Tornado fighter jets to help with the humanitarian mission to aid thousands of fleeing refugees.

Chinook helicopters are on standby in the region in case needed for aid work, and Britain has already delivered weapons from other states to Iraq.

"If we're as serious as we need to be about defending Kurdistan, defending the minorities from this incredibly brutal regime... we need to make sure the Kurds have the equipment with which to defend themselves," Stewart told Sky News.

"That isn't about British boots on the ground, but it's about when the Peshmerga troops are out there, they at least out-gun the people who are coming up against them and hold their territory."

Cameron said the fight against the extremists would also take place in Britain, and anyone who tried to recruit people to the movement or flew the black flag of Islamic State would be arrested.

The government has removed 28,000 pieces of "terrorist-related material" from the internet, including 46 videos related to IS.

British authorities were particularly concerned about fighters travelling from the country to join extremist causes in the middle east, fearing they could be a danger if they return to Britain.

Cameron's plans for military action in Syria were rejected by parliament last year and he would likely struggle to gain support for sending troops back to Iraq after a controversial US-led invasion in 2003.

But opposition Labour MP Ann Clwyd said "it is just a matter of time" before Britain sends in troops. "We cannot stand by and watch a genocide take place," she said.

Politician Nadhim Zahawi, a Conservative member of parliament who is of Kurdish Iraqi descent, said following a trip to the region that between 500 and 750 fighters had joined the Islamic state from Britain.

"A senior Kurdish leader reported to me that one dead jihadi was found with a Liverpool FC membership card in his wallet," Zahawi wrote in The Mail on Sunday.

Cameron said the fight could require unorthodox alliances, and that Britain needed to work with countries like Saudi Arabia and Qatar, Egypt, Turkey "and perhaps even with Iran".

"We are in the middle of a generational struggle against a poisonous ideology, which I believe we will be fighting for the rest of my political lifetime," Cameron wrote.

His comments came after the Church of England slammed the government for not having "a coherent or comprehensive approach to Islamic extremism" in a letter in The Observer newspaper.

On Friday, the European Union agreed to support member states' arming of Iraqi Kurdish fighters, who have military equipment dating back to the Soviet era.