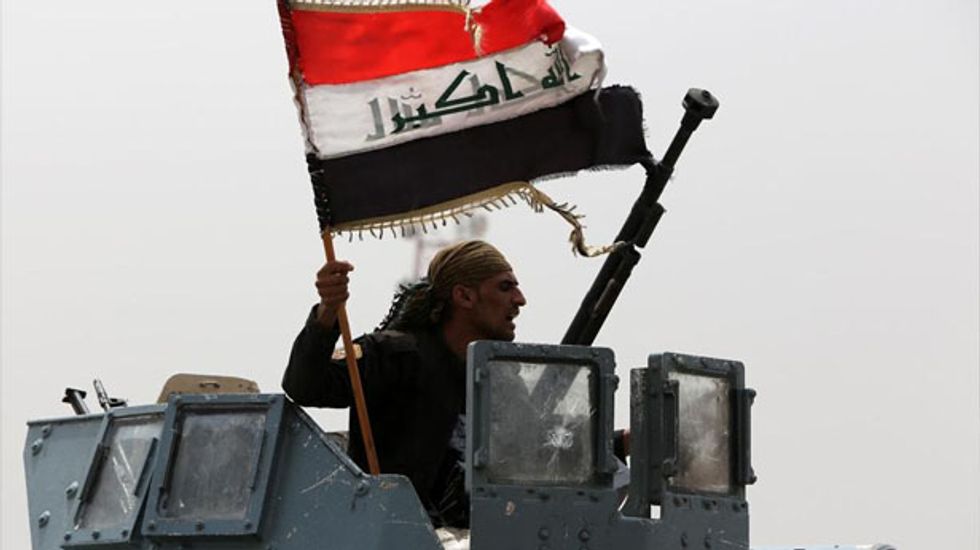 Jihadists targeting minorities are "worse than Saddam", a Kurdish commander says, standing near a sand barrier at a front line in north Iraq, the militants' black flag fluttering in the distance.

The desert area was until recently under control of the Islamic State (IS) jihadist group, which launched a renewed push in Iraq's north earlier this month, taking ground from Kurdish forces, attacking minority groups and forcing tens of thousands of people to flee.

IS is "worse than Saddam. They use terror and chaos to force the population to flee. Then they take over," says Major General Abdulrahman Kawiri, an officer in the Kurdish peshmerga forces, puffing on a cigarette as the sun slips below the horizon.

It is an emotive assertion for a member of Iraq's Kurdish community, which was targeted in a genocidal campaign in the 1980s by executed dictator Saddam Hussein's regime that killed tens of thousands of people.

Kawiri's deputy, Major General Sardar Kamal, says the Kurds' experience under Saddam is part of the reason they are so keen to join the fight against IS.

"We don't want history to repeat itself," says Kamal, as his men pitch tents and get ready to spend the night guarding their freshly recaptured ground, just a few dozen metres (yards) from the nearest IS position.

In the distance, columns of smoke rise from the sites of American air strikes carried out in support of the Kurdish and federal security forces fighting IS.

Kawiri says the strikes have been "very, very helpful".

His forces also have strong Kurdish nationalist sentiment on their side.

"We are fighting a war in self-defence, and we believe in our cause," he says.

Kamal says he has been fighting with the peshmerga since he was 16 years old.

"I can't remember how many battles I've fought," he laughs, while fighters unload watermelons, ice blocks and crates of water bottles from pickup trucks bringing supplies.

The peshmerga's long experience with guerrilla war against Saddam's regime has helped the Kurds turn the tide after losing large swathes of territory to the IS in recent weeks, he says.

The peshmerga's worst defeat was the IS capture of the Mosul Dam, the country's largest, nearly a fortnight ago, but peshmerga and Iraqi security forces retook it on Sunday.

Deployed just a few dozen kilometres (miles) from the dam, Kamal says he cannot remember any wars quite like this one.

IS "had the element of surprise to begin with, but now we know their tactics," says Kamal, while other peshmerga gather to listen in.

"They send fighters with explosives strapped around them into areas and start blowing things up. They attack the civilians -- men, women and children -- and terrorise the rest into flight. Within a short space of time, they take over," he says.

While older peshmerga fighters have a wealth of combat experience, others are facing battle for the first time.

Aram Hikmet, a slight 19-year-old carrying a large machinegun, wasn't born when Saddam's forces carried out their heaviest crackdowns on the Kurds.

"I heard of the Yazidi and Christian women and children being killed," he says, referring to minorities targeted by IS. "I couldn't take it. I had to join the fight."

Another fighter, Jassem Yahya, says he came out of retirement.

"I spent eight years in the Iraqi army, fighting the Iraq-Iran war" that ended in 1988, he says.

"I am a good fighter," he adds. IS "was attacking ferociously. I had to do something."