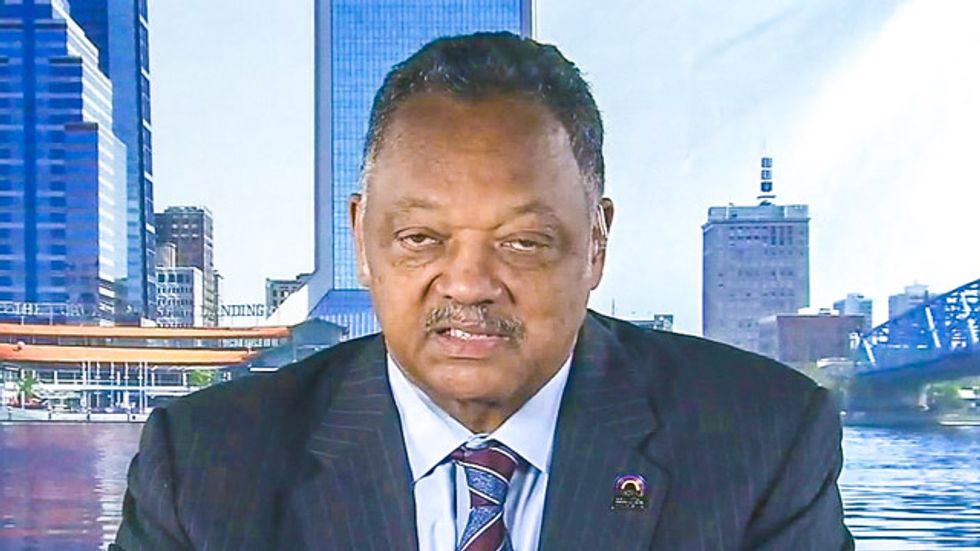 Rev. Jesse Jackson on Sunday called out Fox News for not including African American voices on a "white panel" about Michael Brown's death.

During a Fox News Sunday segment on Brown's death, host Chris Wallace pressed Jackson about why he had classified Brown's death at the hands of a white police officer as a "kind of a state execution."

"At some point we need to have a sense of justice," he added. "All we do know about Mike Brown, he was shot unarmed six times... Police act as judge, jury and executioner."

Conservative former neurosurgeon Dr. Ben Carson, however, argued that what was happening in Ferguson was not a "police vs. black community issue."

"You know, as a youngster, you know, I had anger problems also," Carson opined. "But for the grace of God, I wouldn't be talking to you today. I tried to stab another youngster with a knife."

"You know, anger issues get in the way," he insisted. "And if you take race out of the issue altogether, and you take a group of young men, and you raise them with no respect for authority, not learning to take on personal responsibility, having easy access to drugs and alcohol, they're very likely to end up as victim's of violence and incarceration. It has nothing to do with race."

Carson agreed that racism did exist, but that it was important to look at "bigger issues."

While Wallace had repeatedly questioned Jackson's characterization of the death of Brown, he backed up Carson's claim that the situation had "nothing to do with race."

"Homicide is the number one cause of death between black males ages 15 and 24," Wallace noted. "And 91 percent of black murder victims are not killed by the police, but killed by other blacks. So in a sense, are the protesters focusing on the wrong problem?"

"I wish Dr. Carson and I were part of the white panel you just had," Jackson shot back. "Carson and I, we come out of a body of experience different from your previous guests. Number two, it seems to be that when blacks kill whites, which is rare, it's swift justice. When whites kill blacks, it's rebellion. When it's black on black, there's a shrug of the shoulders."

"Guns in, drugs in, jobs out," Jackson explained. "Racial disparity, and alienation, and mistrust are very combustible formulas -- factors."

In fact, the Fox News panel had included Juan Williams, who is black. Wallace had asked Williams to talk about his Wall Street Journal column blaming police violence against African-Americans on "thuggish behavior."