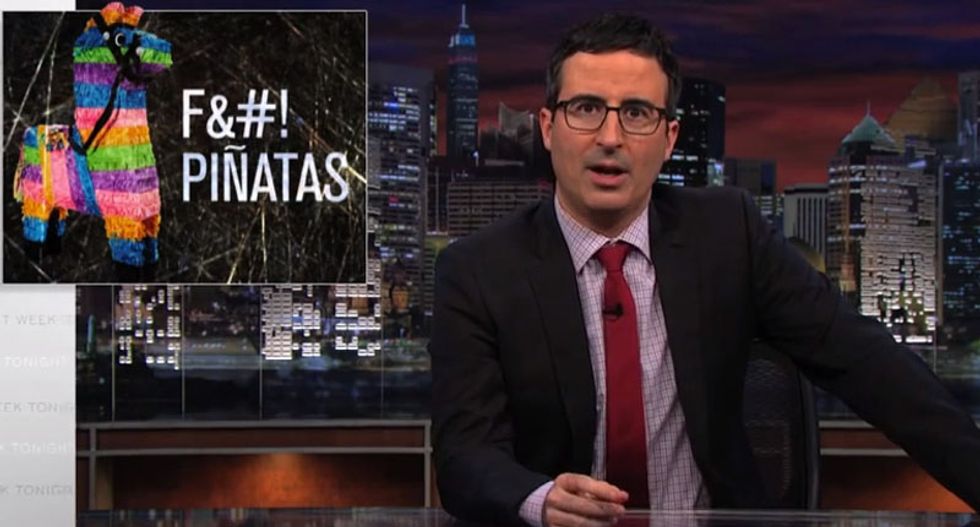 John Oliver's Last Week Tonight is on hiatus for two weeks, but he did leave us a web exclusive video of himself "literally destroying" a piñata as a way of mocking the way Internet websites cover and hype mundane events to build traffic.

Directing his humor at the Huffington Post -- and using their headlines-- Oliver identified himself to the Post's readership as “the man who ‘tore apart FIFA,'" verbally pantsed Dr. Oz,’ and ‘pulverized fictional Canadian Caillou’s stupid bald head into dust.’”

Oliver continued, "Right now I'm going to widen my swath of destruction, or to put in terms the Internet will respond to: 'What happens at the two minute mark of this video will amaze you!' Because the Internet does not know how to describe things anymore and tonight I'm going to take on piñatas."

Calling piñatas "Trojan donkeys of diabetes," Oliver explained, "First of all, f*ck the piñatas. They reach children that animal cruelty is delicious which, yes, often it is, but we're not here to talk about factory farming."

"If you're going to give me candy, just give me the candy, okay? Don't make me go all Joe Pesci on papier-mâché SpongeBob. SpongeBob doesn't owe me money, he didn't disrespect my family. But for some reason we're trick or treating execution-style at my nephew's birthday party."

Turning back to the way his actions are described on the Internet, Oliver pointed out that he would be described as having "demolished, slammed, eviscerated, decimated, and tea-bagged piñatas. But you would be wrong because that's not what any of hose words mean. Up until this point, I've just made some deservedly mean jokes about them. But now, for the sake of accurate Internet headlines, I will literally destroy them."

And then, John Oliver literally destroyed a piñata.

Watch the video below courtesy of HBO: