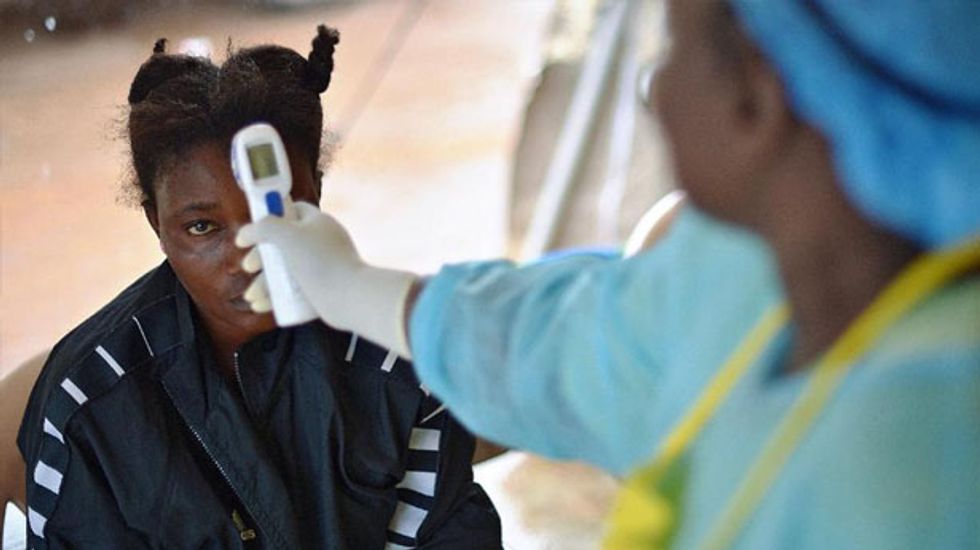 Liberia said Tuesday it had found 17 Ebola patients who had fled an attack on their clinic, sparking a panicked manhunt across its capital, which is in the throes of a seemingly unstoppable epidemic.

The World Health Organization, meanwhile, said the tropical virus had killed 84 people in just three days, a surge that has pushed the overall death toll from the west African outbreak to 1,229.

Liberia's Information Minister Lewis Brown announced the return of the missing infected patients, who had fled a medical facility in a Monrovia slum on Saturday after it was attacked by club-wielding youths.

Their disappearance had raised fears of a nightmare scenario of people with the highly contagious disease wandering the city where unburied corpses have lain abandoned in the streets.

"All 17 patients who fled the Ebola centre have been accounted for," Brown told AFP.

WHO statistics showed that Liberia bore the brunt of the latest surge in fatalities, with 53 deaths, while there were 17 in Sierra Leone and 14 in Guinea.

But in a glimmer of hope, Brown said three doctors in Liberia who had been given the experimental US-made drug ZMapp were responding to the treatment, revising an earlier figure.

From its initial outbreak in Guinea, the virus has spread to three other states, overwhelming inadequate public health services already battling common deadly diseases such as malaria.

The UN health agency has counted 2,240 cases of confirmed, probable and suspected Ebola infection, making this the deadliest outbreak ever.

Nigeria, the most populous country in Africa, has 15 cases and four fatalities, according to WHO data.

Efforts to contain the epidemic have run up against local distrust of outside doctors, and stories of aid workers carrying the infection.

Such fears have often led to violence, with the raid on the medical facility in Monrovia's West Point slum on Saturday the most dramatic example.

Wild rumours of cannibalism and people being drained of their blood in Ebola clinics have fuelled panic, with health workers saying the testimony of survivors was crucial to proving myths wrong.

Nallo Idrisa, who is recovering in a clinic in Kailahun, one of the worst-hit areas of Sierra Leone, told AFP, "At first people thought that when they got here they were going to have all their blood removed and they would die.

"I am much better, so when I get back to my community I will advise people to come here if it ever happens" to them, he added.

WHO spokeswoman Fadela Chaib noted "encouraging signs" in Nigeria and Guinea, where prevention measures and work to trace lines of infection were starting to take effect.

The Nigerian outbreak has been traced to a sole foreigner, a Liberian-American who died in late July in Lagos. All subsequent Nigerian victims have had direct contact with him.

No cure or vaccine is currently available for the disease, which is spread by close contact with body fluids, meaning patients must be isolated.

Given the extent of the crisis, the WHO has authorised largely untested treatments -- including ZMapp and the Canadian-made VSV-EBOV vaccine, whose possible side effects on humans are not known.

Quarantine cordons now limit travel to some of the most infected areas such as Gueckedou in Guinea, Kenema and Kailahun in Sierra Leone and Foya in Liberia.

But with supplies cut, many of the one million people living in the zones are struggling to feed themselves, Chaib said, and the World Food Programme was now stepping in.

Countries in Africa and beyond are on high alert, with the Equatorial Guinea airline, Ceiba Intercontinental, the latest to suspend flights to the whole region.

On Tuesday, medical authorities in Spain said a man with fever who had returned from Sierra Leone had been placed in an isolation ward, while two Nigerian men are being monitored in a hospital in Vocklabruck in central Austria.

German experts said that a sick 30-year-old woman of West African origin who sparked an Ebola scare in Berlin was likely to be suffering from a gastrointestinal infection.