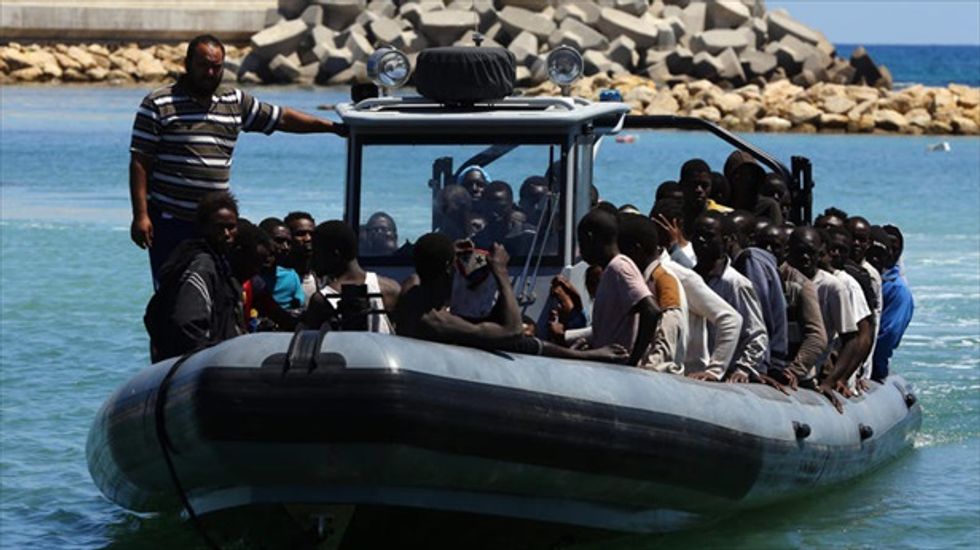 Libyan coastguard escorts illegal migrant after their boat started to sink off the coastal town of Garabulli on July 17, 2014 [AFP]

Tripoli (AFP) - A Libyan coastguard official said on Friday a boat carrying 200 illegal migrants from sub-Saharan Africa was feared lost at sea off the capital Tripoli, with 170 people still missing.

Libya, which is mired in unrest and political chaos, has been a launchpad for illegal migrants seeking a better life in Europe but who turn to people smugglers to get them across the Mediterranean.

Since the end of July, dozens of people who have set off on rickety boats from the Libyan coast have died at sea, and dozens more have gone missing, presumed drowned.

"We are looking for 170 African passengers on a wooden boat that has foundered off the Guarabouli area" some 60 kilometres (35 miles) east of Tripoli, coastguard official Abdellatif Mohammed Ibrahim told AFP.

"A few miles off the coast, we found the remains of a wooden boat which had some 200 migrants on board," he said.

"We managed to save 16 people and recovered 15 bodies, but the search continues for some 170 people who disappeared at sea," Ibrahim told AFP.

He said the coastguard was lacking in resources, and had only one patrol boat to search for the missing people.

An AFP journalist reported seeing the body of a child who was nevertheless wearing a life-jacket.

The coastguard official was unable to give any firm details of the nationalities of the victims or survivors, but added: "It seems that among them are Somalis and Eritreans."

People smugglers have been thriving in Libya, an oil-rich nation marred by unrest and political rivalries and where the interim government lacks the manpower and resources to monitor the coast properly.

On Thursday, Tunisian fishermen rescued 75 migrants who had been drifting at sea for five days after leaving Libya aboard an inflatable in an attempt to reach Italy.

The migrants were in a state of extreme fatigue by the time they made landfall in Zarzis, in southern Tunisia, where emergency services took charge of them, an AFP correspondent reported.

Earlier this month, Tunisian coastguards intercepted 90 African migrants whose makeshift boat heading from Libya for the Italian island of Lampedusa broke down off Zarzis.

In July more than 20 migrants drowned while dozens disappeared at sea when their boat capsized off the Libyan coast. Survivors said there had been 150 people on board.

In June, Italian sailors recovered the bodies of 10 migrants after their rubber dinghy sank off Libya, while dozens others were rescued.

On August 12, EU border agency Frontex said the number of boat migrants arriving in Italy soared 500 percent in the first half of the year, already topping a 2011 record during the Arab Spring uprisings.

The Warsaw-based agency said 78,300 people had arrived in the European Union by the end of July via the hazardous Mediterranean route from Libya to mainly Italy, but also Malta.

"Libya is highly unstable as it is now, and that means that the people-smuggling networks are flourishing," Frontex spokeswoman Izabella Cooper told AFP.